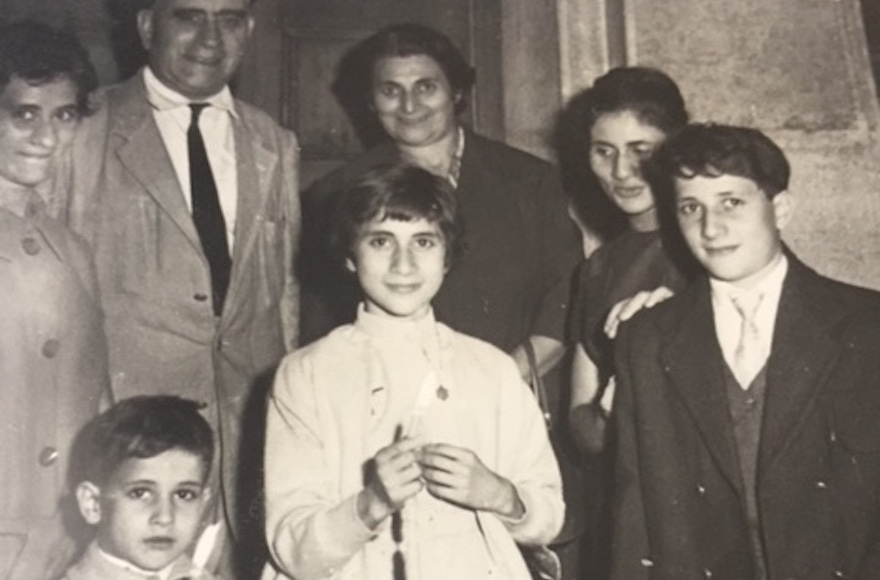 Andre Nathan, who was born the same year that the Nazi-allied Vichy government revoked the French citizenship of Algerian Jews, recalls taking this picture of his parents and siblings outside the Oran synagogue on a Jewish holiday in the 1950s. (Courtesy of Nathan)

(JTA) — Andre Nathan was one of the very first survivors to apply for a hardship grant following Germany’s decision this week to compensate Jews who suffered persecution in the French colony of Algeria during World War II.

Now 77 years old, Nathan arrived Tuesday at the Paris office opened by the Conference on Jewish Material Claims Against Germany to take applications. Nathan was born in 1941, a year after the Vichy government revoked the French citizenship of Algerian Jews. The Nazi-allied government imposed laws banning Jews from working as doctors, lawyers, civil servants and journalists, and expelling them from schools.

Sunday’s announcement means that as many as 25,000 now elderly Jews who suffered under Vichy’s anti-Semitic laws between 1940 and 1942 are eligible for a one-time hardship grant and additional services like food vouchers and in-home care. Each survivor approved will receive 2,556 euros, the equivalent of approximately $3,100, or 5,000 Deutschmarks, a sum the Claims Conference negotiated with the German government in 1980. The money will be distributed beginning in July.

Nathan’s family lived in Algeria’s second-largest city, the port city of Oran, which had a substantial Jewish community. His father was a postal worker and his mother worked in an army equipment office. Both lost their jobs as a result of the Vichy decrees, he told a Claims Conference worker who translated his answers from French into English in response to JTA’s questions. His older sister, who was school age, was expelled.

Life before then was good for Jewish families in Oran, he recalled. His family lived near the heart of the city’s Jewish community, on the Rue de la Revolution.

“We celebrated holidays and life with other groups was generally harmonious, with the exception of anti-Semitic remarks from the Spanish community,” Nathan said. “I played the violin and my teacher was in the Spanish neighborhood, so getting there and back was sometimes difficult.”

His father had served in the French army and was wounded during World War I. For his father especially, the anti-Semitic laws “must have been awful as there was nothing he was more proud of than his French nationality,” Nathan said.

But his parents never spoke of their trauma. Nathan left in 1959 to study in Grenoble, a city in southeastern France. In the years after Algeria declared independence from France in 1961 and extended citizenship only to Muslims, most of the country’s Jews left for France or Israel. In 1962 his father was flown to France because of the lingering effect of his wartime injuries. Nathan said his mother and six siblings “had to flee by boat as Algeria declared independence.” He served in the French army.

“My father always taught me to be proud of my country,” Nathan said. “He told me ‘you must serve France’… in his view I had to do it.”

Daniel Gal’s family left Oran in the late 1950s for Israel, eager to distance themselves from the country of his birth. In an interview from his home in Jerusalem, Gal told JTA “there is no such thing as Algerian Jews. There are Jews from Algeria, but they were at that time French.”

Gal, whose family name then was Drai, was the eldest of three siblings and in his first year of school when he was expelled for being Jewish. His father was a winemaker at a local vineyard owned by a wealthy Jew, and lost his job when the vineyard, along with other Jewish-owned property, was expropriated by the Vichy government. His mother began cooking and cleaning for a non-Jewish fishing family in the port city, Gal recalled. 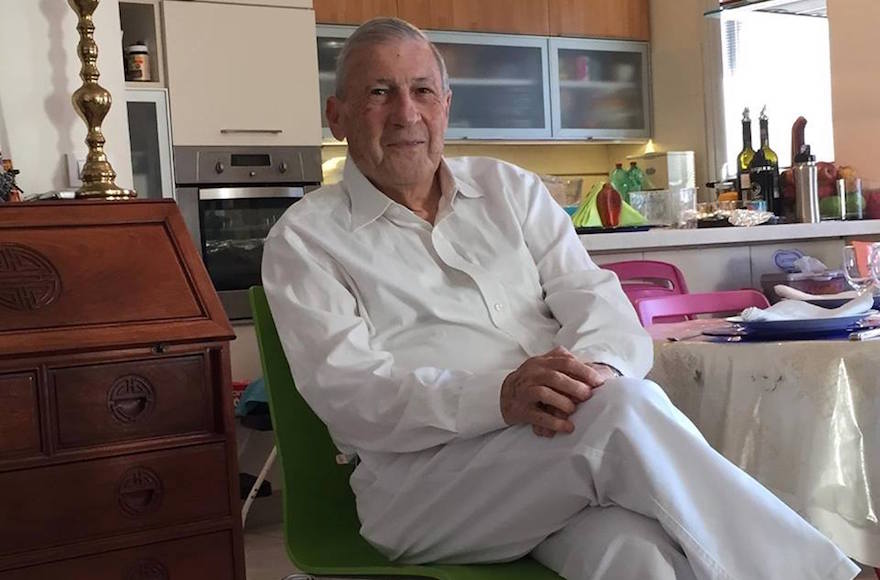 Daniel Gal, whose family left Algeria for Israel in the late 1950s, wearing white for the 50th anniversary of Jerusalem’s reunification, June 2017. (Courtesy of Gal)

His father scrounged up whatever odd jobs he could without a work permit. Christian refugees in Oran who had fled Franco’s Spain would share their food with the Gal family. Jewish doctors forced from their jobs began helping Jews in need of medical care. Teachers set up Jewish schools, which Gal began attending.

“Always in Algeria you had solidarity, especially among Jews,” he said, “and we never starved.”

His family left Algeria for Israel as soon as Gal finished high school, first living on a kibbutz. Gal met his wife on the last day of his Hebrew-language course and soon went to work for the Foreign Ministry, where he stayed for 40 years as a career diplomat. Gal and his wife raised their children all over the world as he served as Israel’s consul general in Milan and in Montreal, and Israel’s ambassador to Costa Rica and Singapore.

Today Gal is 81, a father of three and grandfather of three — all his children live nearby and they spend every Friday night together — and publishes a blog.

Nathan married in 1970 in France, where he stayed, and he and his wife had three children. He worked as the chief financial officer of several large companies, including HP and Massay Ferguson, he said.

The German decision this week to recognize the suffering of Algeria’s Jews took him by surprise.

“I did not expect this recognition of what my parents endured,” Nathan said.

If he is approved and receives the German government’s hardship grant, Nathan said he may use the money to travel to Israel, adding that “I think it would be a good thing” to do.

Gal heard about the settlement a few days ago from a lawyer friend and said he will fill out the application as soon as it arrives in the mail. He said he expects to give the money, if he is approved, to charity. The hardship grant, Gal said, means “we will have more money for poor Jew.”

“It’s not a huge amount of money. Symbolically we also deserve to be recognized as part of the Jewish people who suffered from the Shoah,” Gal told JTA. “I had felt a kind of discrimination” until now, he said, adding that “Jews from Morocco and Greece were recognized, why not us?”

At the Passover seder “we say that each Jew has to think of himself as part of the Exodus from Egypt. As Jews we were also sitting in part of the Shoah,” Gal said. With this recognition, “I feel that some justice was done.”