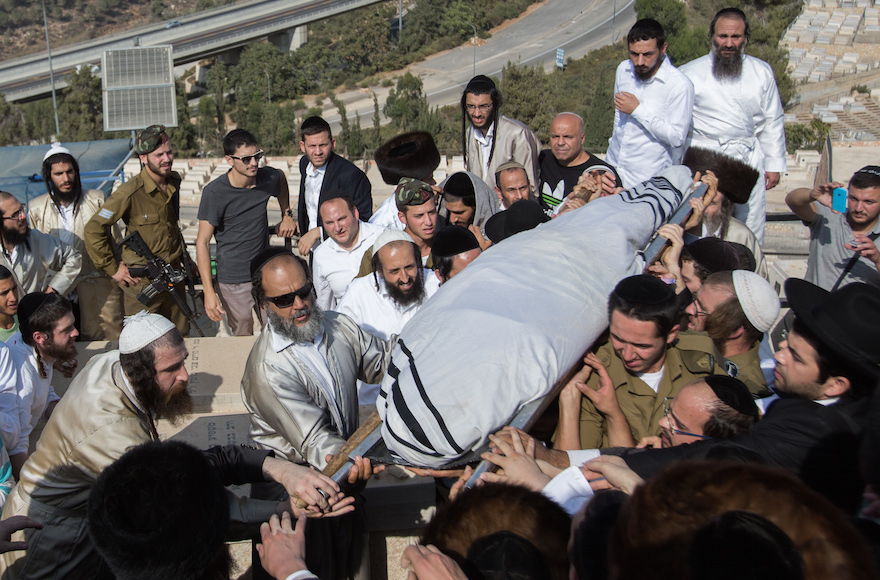 Friends and family carrying the body of Aharon Banita, who was killed in a terrorist attack in Jerusalem, during his funeral in the city, Oct. 4, 2015. (Yonatan Sindel/Flash90)

(JTA) — Thousands attended the funerals of two Jewish-Israelis who were stabbed to death in Jerusalem’s Old City.

The funerals for Rabbi Nehemia Lavi, 41, and Aharon Benita, a 22-year-old soldier, were held in Jerusalem on Sunday afternoon. They were stabbed to death on Saturday night by a Palestinian assailant who was shot to death by Israel Police.

Lavi, a rabbi at the Ateret Cohanim yeshiva and a father of seven from Jerusalem, had rushed to the scene of the attack. At the funeral, his father praised his bravery.

“Without any hesitation or delay, you ran to save an innocent family that was on its way to the Western Wall,” Yehezkel Lavi said, the Times of Israel reported.

Benita’s wife, Adele, and 2-year-old daughter also were injured in the attack and are hospitalized.

At the funeral for Benita, directly after Lavi’s, Adele’s mother, Miriam Gal, said in a eulogy that passers-by yelled that they hoped Adele would die too as she ran, seriously injured, for assistance.

“Aharon promised her that he would make her the happiest Sukkot ever. What promises he promised her,” Gal said. “Whoever speaks about peace is stupid. There’s no other word. The people of Israel need to wake up.”

In his eulogy for Lavi, Israeli President Reuven Rivlin urged Israelis to continue to visit the Old City and Western Wall, despite the violent attack.

“We cannot stop going to the Western Wall, the remnant of our temple,” he continued. “I urge the pilgrims — don’t forsake the Old City, we must march in the footsteps of Nehemia and Aharon and prove that they [the terrorists] will not harm our way of life,” Rivlin said, according to the Times of Israel.