From artwork to babka, Jewish Parisians are struggling to weather the COVID-19 storm

PARIS (JTA) — It has been a turbulent five years for the French capital’s residents. From the Charlie Hebdo and November 2015 terrorist attacks to the upheaval caused by the yellow vest movement and the debilitating transit strike at the end of 2019, both the local economy and population have endured trying times.

Now, with a global pandemic and strict confinement measures that have been in place for eight weeks, Parisians have faced even greater uncertainty.

The coronavirus crisis has impacted so many corners of Jewish life, particularly for the many entrepreneurs in the creative and culinary arts, in both expected and unexpected ways. Here are a few. 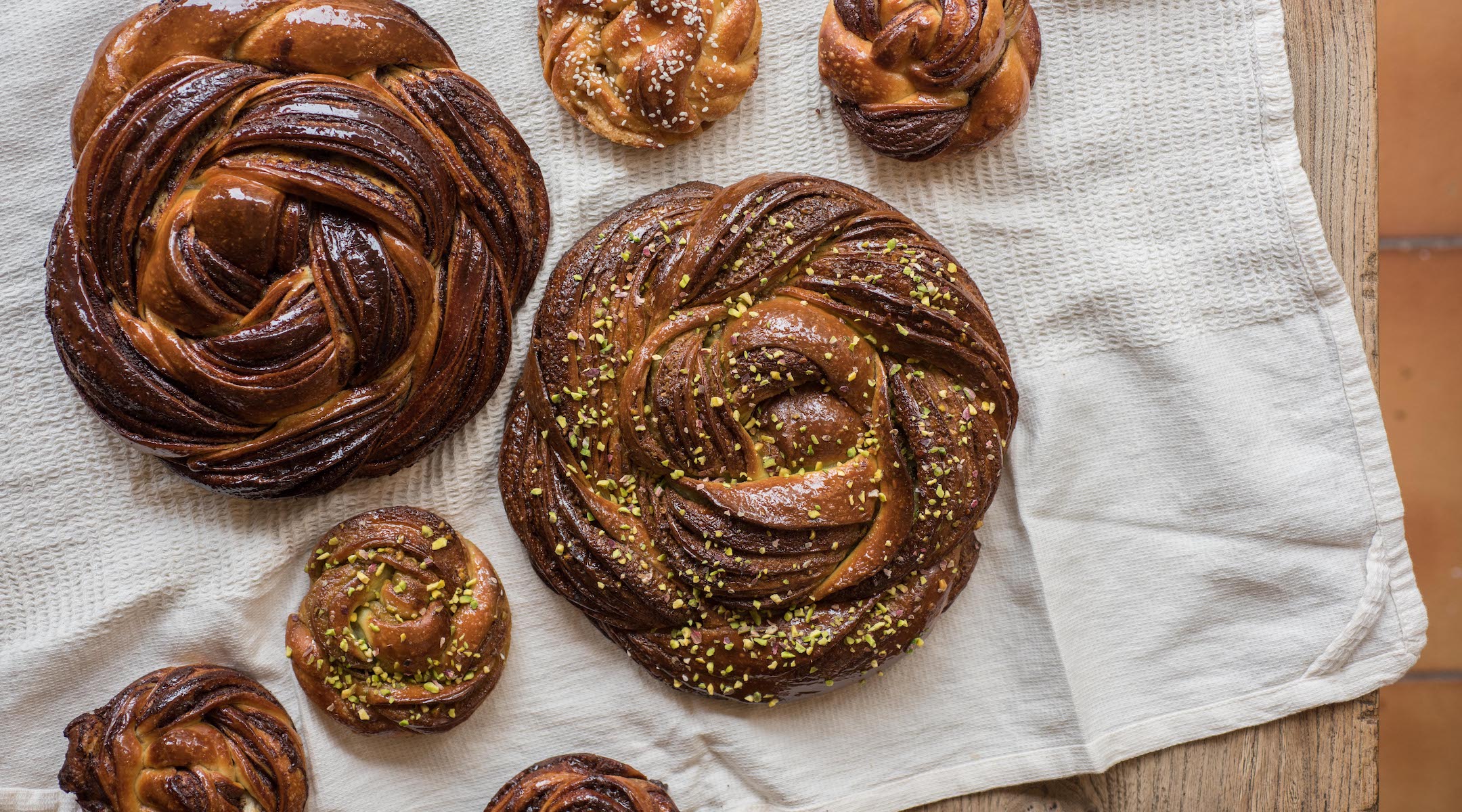 Some of the delicacies from Babka Zana, which had just opened before the pandemic hit. (Geraldine Martens)

Over the past two years, Jewish specialties like rugelach, babka and challah had begun popping up in contemporary bakeries all over the city. So when husband and wife Emmanuel Murat and Sarah Amouyal opened their Babka Zana bakery on Jan. 15, they had high hopes.

Their goods, from babka rolls to challah sandwiches, quickly earned attention in the French media, drawing the accompanying crowds to their location in the city’s south Pigalle neighborhood. But within two months, everything came to a halt.

“As a bakery, we were considered an essential service and could have stayed open, but we couldn’t ensure the safety of our team or our clients,” Murat said.

With stringent sanitary measures and an updated production process to respect social distancing guidance, Murat and Amouyal reopened Babka Zana for delivery and pickup on April 17. The future, however, remains unknown.

“I’m optimistic by nature, but it’s going to take time,” Murat said. “Not all restaurants will survive this.”

For the 3-year-old Israeli canteen Chiche, located in the shadow of the Place de la République, where demonstrations and rallies are common, business was finally rebounding from the transport strikes of late last year. Chiche co-owner Jonathan Sason-Cohen said revenue had been down 45 percent during the strikes, which stifled the city’s public transportation for a month and a half.

Then the pandemic shut down the operation.

By the seventh week of quarantine, Sason-Cohen was ensuring contactless delivery on Fridays for food and accessories, such as tote bags, on orders placed online. Still, his post-confinement outlook is less than optimistic.

“It’s true that we’ve been lucky in France, thanks to government aid and a partial unemployment option, but that only goes so far,” he said. “We still don’t know when we can reopen fully and under what conditions. If we can’t fill our space, it may not even be cost-effective to open.” 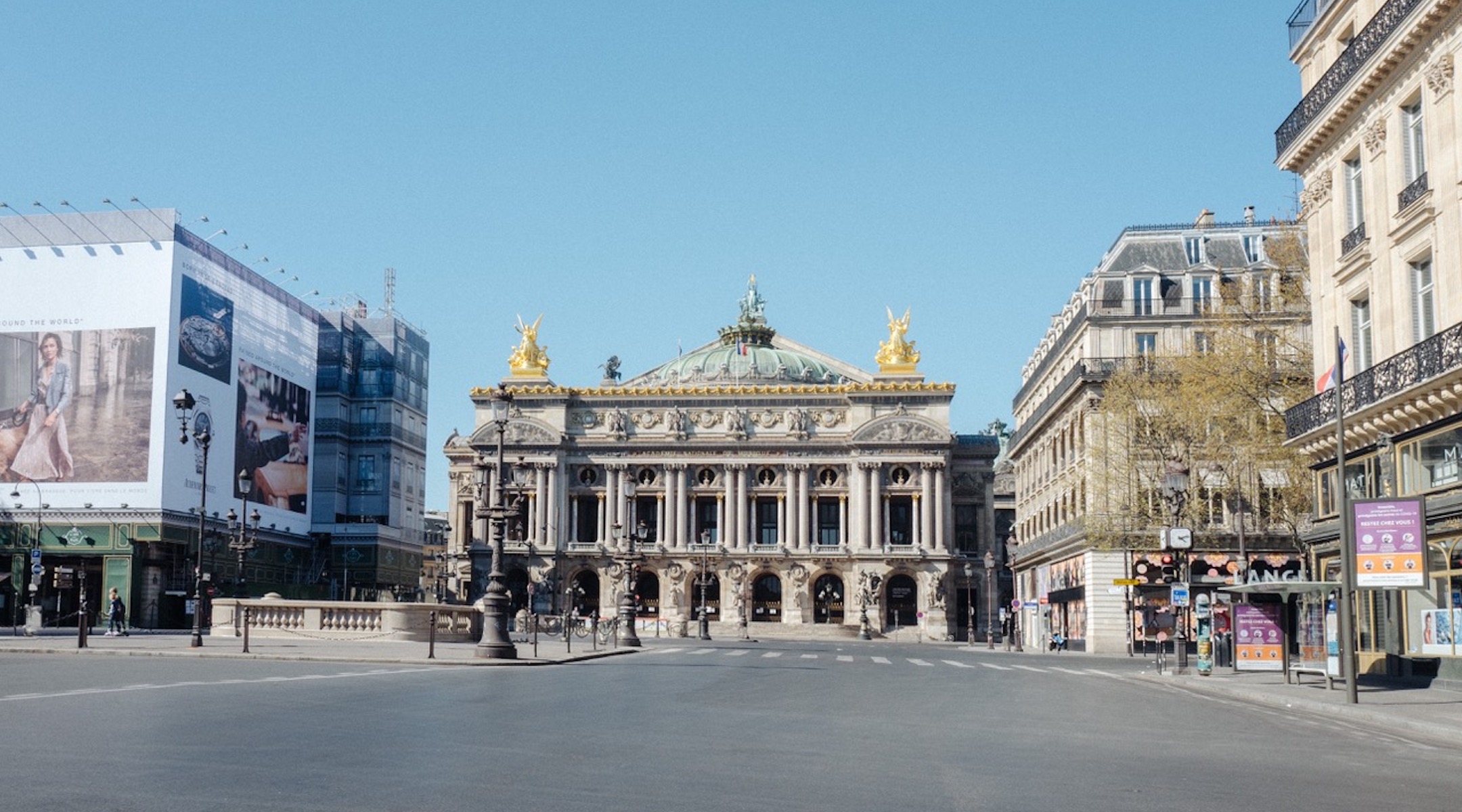 Music video director Philip Andelman fell into documenting the empty public places of Paris while teaching his son how to ride a bike. (Philip Andelman)

For Philip Andelman, an American expat who directs commercials and music videos internationally, the pandemic has marked several firsts: the first time nearly all of his work has completely evaporated, and the first stretch of time in his 11 years in Paris that he’s had uninterrupted time with his wife and son.

“Early on in the confinement I was bidding on a new Rolling Stones video and had an idea the label liked, but it couldn’t be done with a crew of less than five people (our normal crews are between 30-200 people) and even that gave them pause (and we couldn’t secure insurance) so the project was put on hold,” he said in an email.

Andelman admits the unexpected free time has afforded him the opportunity to begin developing two longer-form projects that were always put on the back burner. That and teaching his son, Woody, how to ride a bike.

“Within a day, he was doing laps around the perimeter of the Tuileries gardens,” Andelman said.

It’s during these walks that Andelman began snapping photographs of the city in its unprecedented emptiness.

The absence of all movement at Place de la Concorde, the shuttered boutiques around the Opera Garnier and the exquisite stillness of the Seine River are among the scenes that he has captured on his Instagram page — it’s become a chronicle of the city during lockdown. 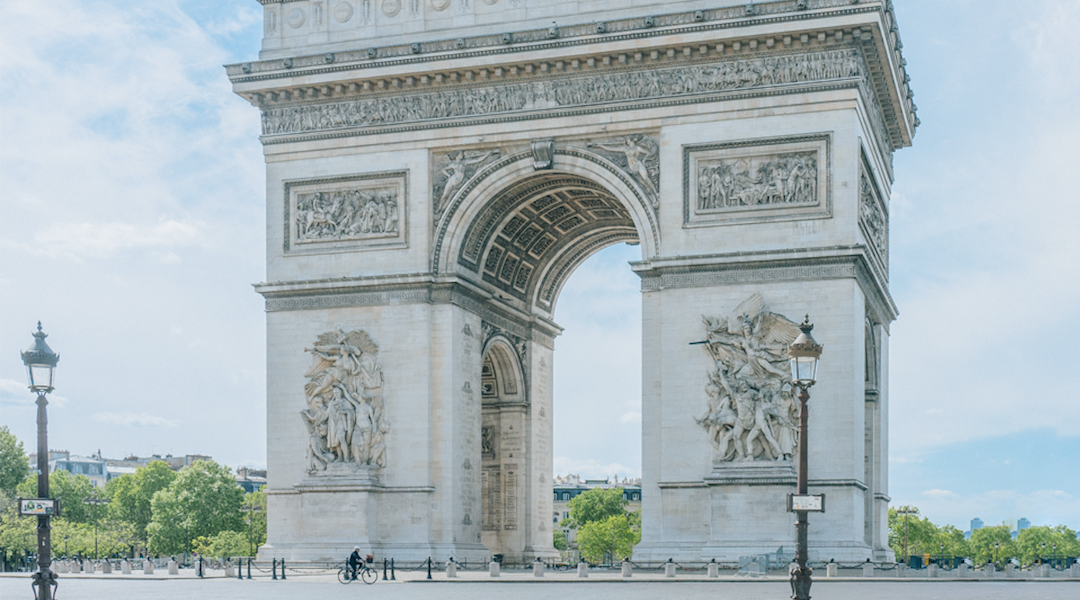 Prior to the pandemic, Tel Aviv natives Sharon Heinrich and Gali Hadari were spending six out of seven days of the week running specialized sweets-focused tours under the name Paris Chez Sharon. They’d bring guests into the pastry kitchens of the city’s top chefs and set up exclusive demonstrations with their favorite bakers and chocolatiers. The women, who are minor celebrities in Israel, struggled to keep up with demand for their experiences. 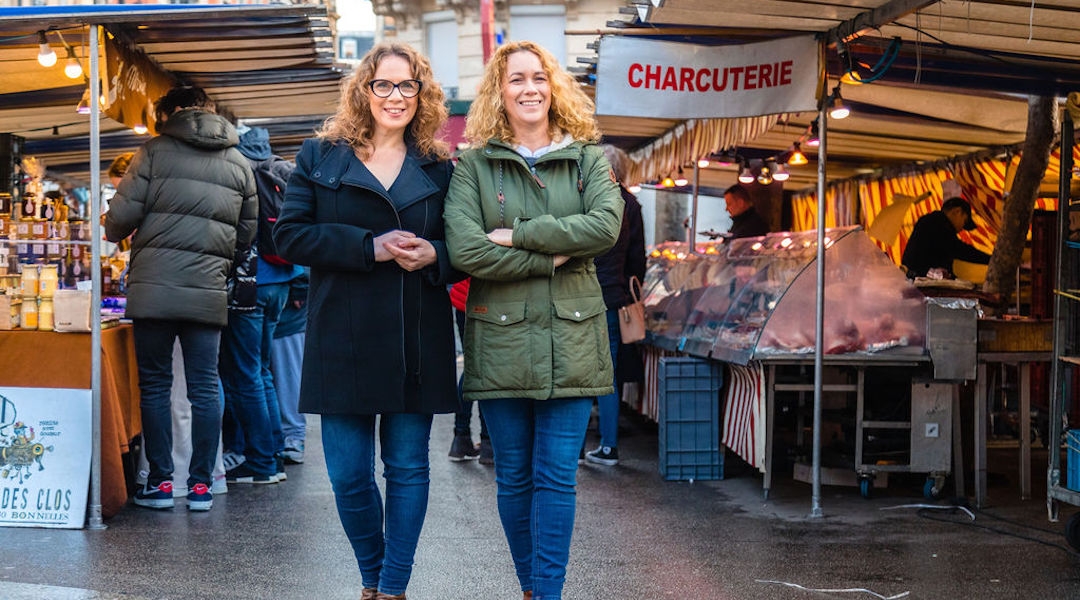 Overnight, that all obviously stopped. Flush with downtime, the couple has used the confinement period to strategize new business ideas, build a new website, double down on Sharon’s online brand (nearly a half million followers on Instagram) by publishing new (and delicious) videos, and connect with their fans from around the world through Zoom lectures and live Instagram chats with top chefs, such as Nicolas Paciello and Angelo Musa.

They may not welcome customers for several months, but Hadari sees a philosophical lesson to be learned about her business.

“In our case, we have spent more quality time together and it has strengthened our view that our lives should be about buying less material things and focusing on fulfilling experiences,” she said.

A new way for artists to exhibit their work 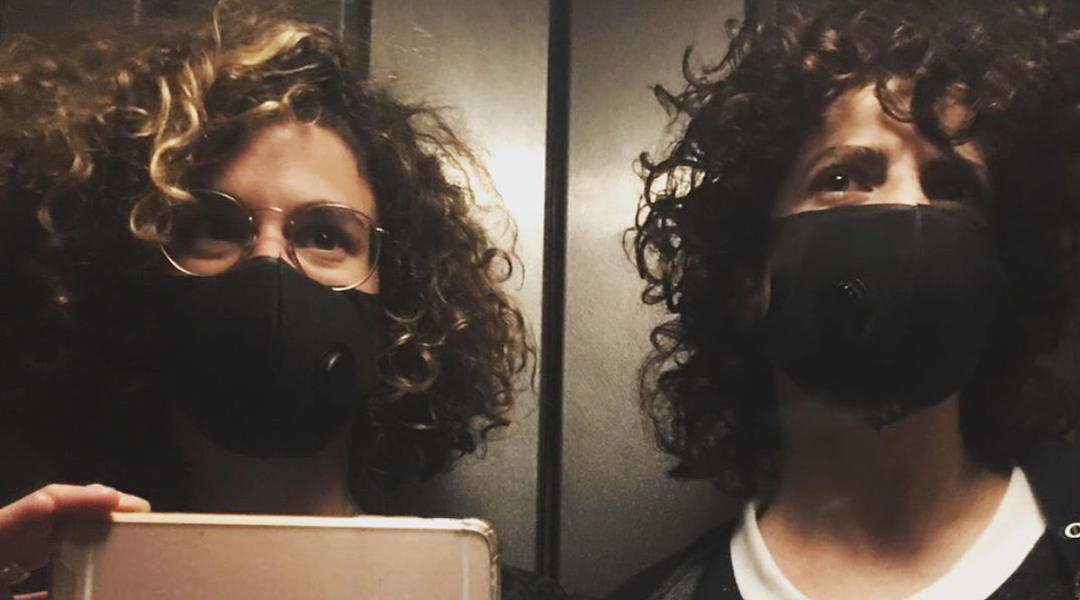 Tamara Piller, right, with partner Lea Namer, is designing a new online platform for artists to display their work on. (Tamara Piller/Instagram)

For Tamara Piller, a French-Australian interface designer and artistic director, quarantine offered her time to reflect on her work.

“I was inspired by my girlfriend Léa Namer whose architectural exhibition in Argentina was canceled at the last minute due to the pandemic,” she said. “I wanted to reimagine the experience for the web that goes beyond a simple virtual tour, so I started by building her website.”

Piller also used the quarantine to emotionally reconnect with Namer, a French-Argentine architect. They both put in long work days but maintained their Friday night ritual of saying the blessing over wine and candles.

Now they’re collaborating on a website that Piller says will be a better virtual online platform for artists and researchers to display their work.

“There’s so much potential for a dedicated platform to host experiences for other works, so that’s my next step,” Piller said.

Congregations go online, and get busier than ever 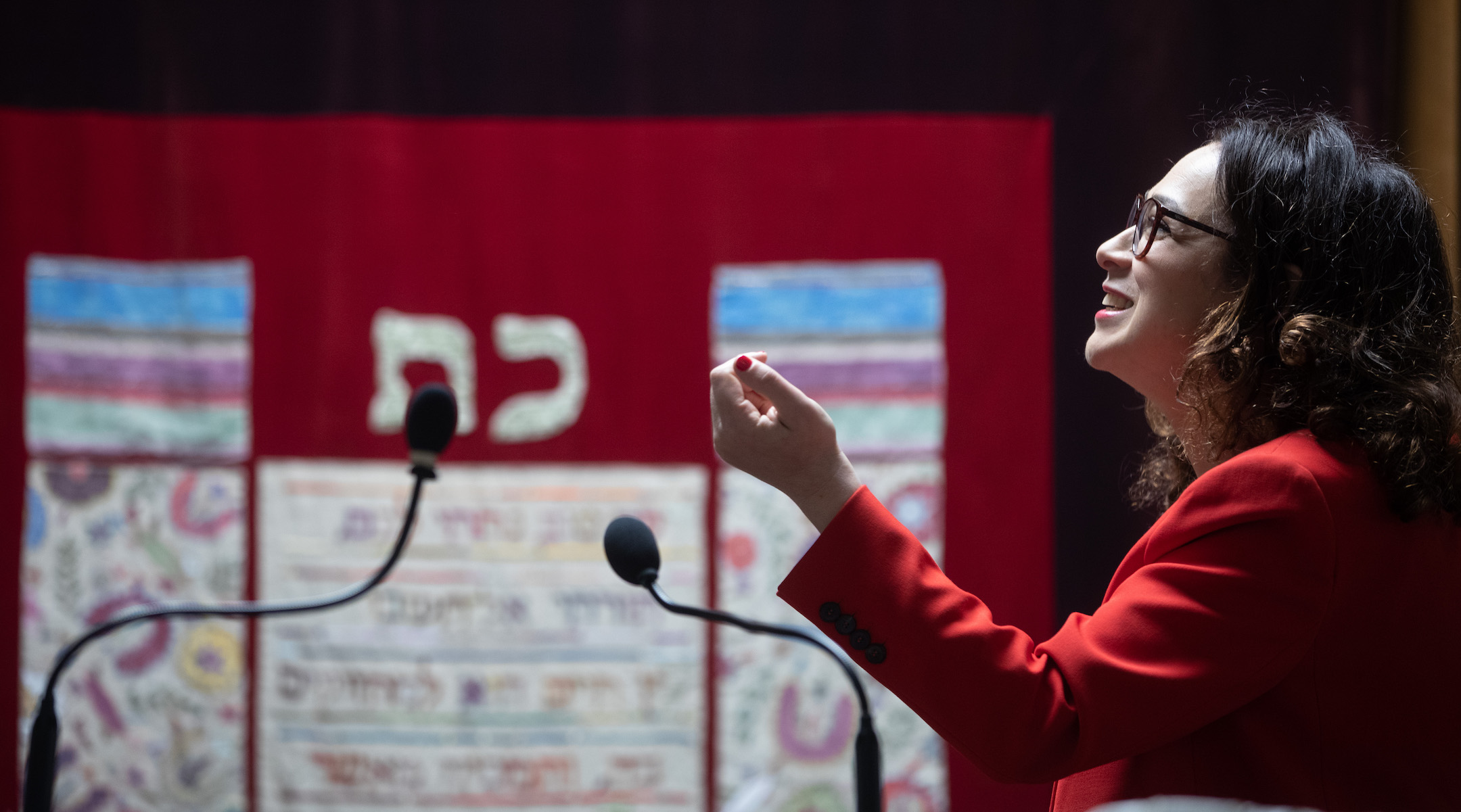 At Kehilat Gesher, the only trilingual (French, English and Hebrew) progressive synagogue in the Paris region, the event calendar has been packed since confinement began. From virtual Seders streamed live on YouTube to Judaism classes and book club sessions and morning prayers on Zoom led by Rabbi Tom Cohen, congregants have been able to stay connected to the community.

“The Plagues we suffer now (certainly the wake-up call of the Coronavirus crisis but also environmental distress, climatic change, and terrorism, to name but a few of the modern plagues), like the 10 Plagues, are not only impediments to our finally enjoying real liberty and spiritual redemption,” Cohen wrote on his Facebook page a week before Passover. “They beckon us to work towards transformation on ‘that day after’ when we get to leave our homes.”

Rabbi Delphine Horvilleur of MJLF (Liberal Judaism Movement of France, a progressive community), as well as the editorial director of the quarterly review Tenou’a, is one of the most prominent Jewish public figures in France. Since the start of 2020, she has graced the cover of Elle magazine and participated in a charity auction to benefit a nursing home organization alongside some of the most influential names in the French fashion industry.

Her Reform congregation, the largest in Paris, has transitioned seamlessly to online services, lectures and weekly Talmud study.

“In only a few weeks we managed to come together without actually being together,” she said.

That has included thousands of Jews and non-Jews from all over the world tuning in virtually to seek comfort and guidance from Horvilleur and the MJLF community.

“It will take time before we can physically gather again, but one thing is certain: not everything will revert back to the way it was,” Horvilleur said. “We will carry with us what we’ve learned from this crisis.”