From a ‘La La Land’ lyricist and other Broadway talent, a political Passover ‘musical’ 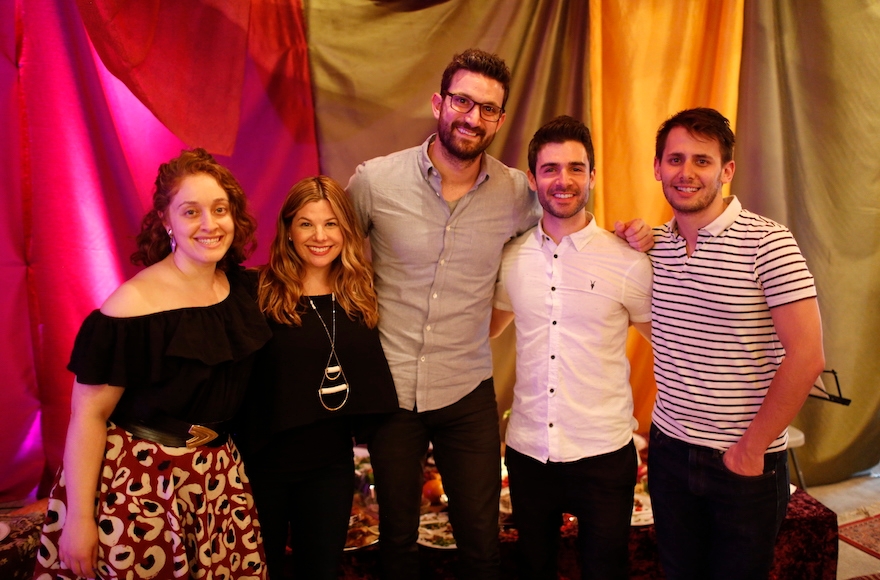 (JTA) — What happens when you cram a bunch of Broadway’s brightest Jewish talent into a room to celebrate a festival-like seder on the last evening of Passover?

The answer, as you might have guessed, is much more than a lively rendition of “Dayenu.”

On Monday night, Benj Pasek (who penned the lyrics for the “La La Land” and “Dear Evan Hansen” scores), actor Adam Kantor (“Rent,” “Fiddler on the Roof”) and other Broadway insiders hosted about 90 guests at “Unleavened,” a multifaceted night of music, comedy and poetry based on the themes of the seder.

Pasek, who famously referred to his JCC soccer career while accepting an Oscar in February for his “La La Land” work, later told JTA he had wanted to pull off an event like this for a long time.

“The goal of the evening was to pilot an idea of how we can reinterpret the seder ritual to encompass modern-day concerns and show that the age-old themes of Passover — the journey from slavery to freedom — are as relevant as ever,” he said in an email. “For years, my quirky Jewish family has hosted an alternative seder connected to issues of the day, set in a Bedouin tent in my living room. Some good friends and I wanted to bring that experience to a larger group of people in an intimate setting, and use performances by a variety of artists from all denominations to tell a modern version of the story of Exodus.”

The event was primarily sponsored by the Charles and Lynn Schusterman Family Foundation’s #MakeItHappen initiative and Reboot, a foundation that aims to modernize Jewish traditions. The other organizers were Rebecca Soffer, a former producer for “The Colbert Report” and a co-founder of the website Modern Loss; Iris Mansour, a British journalist who has previously collaborated with the Schusterman Foundation, and Brian Bourdainick, a culinary entrepreneur.

“Unleavened” — held in a Midtown Manhattan space that was, yes, decorated like a Bedouin tent — wove together storytelling and a variety of artistic genres. Veteran performers like the singer Josh Groban sat (somewhat uncomfortably, after a while) on pillows around low tables stacked with wine and food. The performers were up close and personal with the audience; microphones were barely needed. (This reporter was instructed not to take any notes during the event, so as not to look conspicuous and disrupt the “intimacy of the night.”) The Syrian civil war, global slavery crises and President Donald Trump’s immigration policies were all recurring themes. 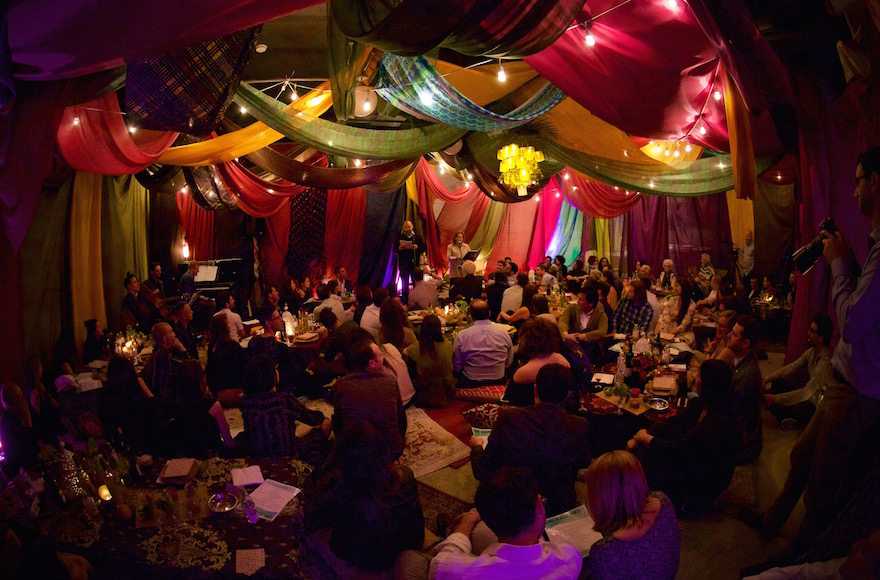 Rabbi Amichai Lau-Lavie of New York’s buzzy Lab/Shul explained the seder plate and urged participants to meditate on how to use the Passover themes as motivation for activism. Burstein and Feldshuh, performing a funny script by Joshua Harmon (author of the plays “Bad Jews” and “Significant Other”), sped through Haggadah technicalities and offered interludes between performances: “slavery, slavery, slavery, suffering, suffering, suffering,” they quipped at one point.

But the event quickly departed from traditional Passover fare.

For example, while Kantor sang “Somewhere Over the Rainbow,” Pasek interjected historical context about the tune’s lyricist, Yip Harburg — the son of Yiddish-speaking immigrants — and compared its emotions to how Jews felt at the start of the Holocaust. Shapiro later told the story of a rock band consisting of Syrian refugees who made it to Germany — then he belted out one of their songs (he sang in an a cappella group at Yale, in case you’re wondering).

Ahmed Badr, an Iraqi refugee whose family home was bombed, recited a wrenching poem from the perspective of the bomb. Singer Shaina Taub performed an original song inspired by “The New Colossus,” the Emma Lazarus poem inscribed on the base of the Statue of Liberty.

Comic relief came from standup Mario Cantone (“Sex and the City”), who portrayed a hapless Sean Spicer, press secretary for “Pharoah,” desperate to downplay the danger of the ten plagues.

“I’m kind of bowled over by this night,” Burstein told JTA during a dinner intermission as participants munched on matzah with toppings from Russ and Daughters. “There’s a rare kindness pervasive in this room.”