For the first time, a woman will lead an Israeli Orthodox synagogue 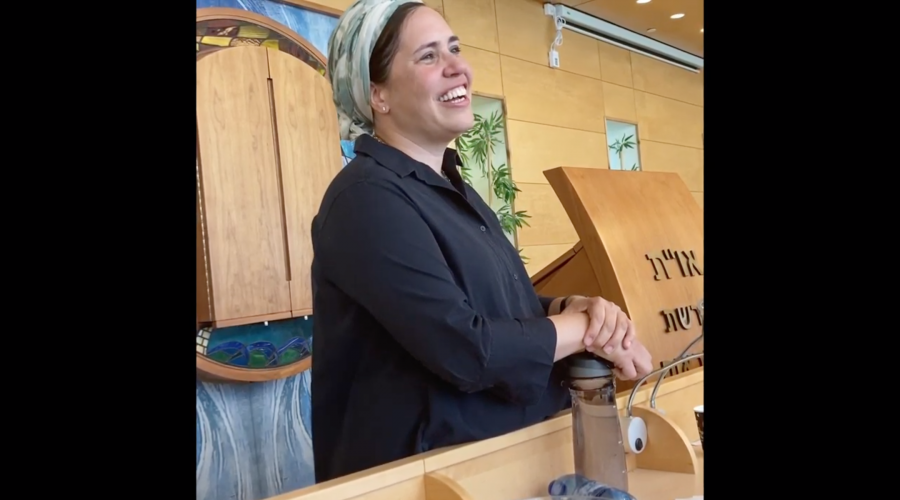 Rabbanit Shira Marili Mirvis will be the spiritual leader of Shirat Hatamar, an Orthodox synagogue in the West Bank settlement of Efrat. (Screenshot)

(JTA) — A woman will be the spiritual leader of an Israeli Orthodox synagogue for the first time.

Shirat Hatamar, a congregation in the West Bank settlement of Efrat, elected Rabbanit Shira Marili Mirvis, 40, as spiritual leader on Monday with the support of 83% of its membership.

“I truly hold in my heart all of the women, across all of the generations, who are greater than me, and smarter than me, and fear heaven and are students of Torah that didn’t receive the recognition and love that I have received,” she said in a speech this week. “I have a congregation that is a group of people — men, women and children — that come together to serve God in happiness, simplicity and prayer.”

Mirvis’ election is a historic breakthrough in Israel. Unlike the more liberal Conservative and Reform movements, which began ordaining women decades ago, Orthodox seminaries have traditionally ordained only men as rabbis.

That began to change about 10 years ago, as Modern Orthodox seminaries in Israel and the United States began ordaining women with a title akin to “rabbi” while teaching women a curriculum identical to that of male rabbinic students.

The ordination of women remains controversial in the Orthodox communities of both countries. Israel’s Chief Rabbinate, which is dominated by haredi, or ultra-Orthodox, officials, does not recognize women as rabbis or authorities in Jewish law. The Orthodox Union, an umbrella group in the United States, similarly does not recognize women as rabbis and prohibits its member synagogues from hiring women as clergy.

Women serving as leaders of Orthodox congregations is still a rarity across the world. In the United States, only a few Orthodox women have led congregations. Women regularly lead Conservative and Reform synagogues in the United States, where those movements represent most American synagogues. Women have also led non-Orthodox congregations in Israel, where the Conservative and Reform movements are far smaller and often derided by Orthodox officials.

“[Mirvis’] appointment serves as an official recognition of her broad work to promote Torah and contribute to the community,” Shirat Hatamar said in a statement posted alongside Mirvis’ speech. “We are certain that Shira will continue in her blessed work in the community and will serve as an example of attentive leadership for everyone.”

Mirvis will soon receive her degree from the Susi Bradfield Women’s Institute of Halakhic Leadership after completing a five-year curriculum studying Jewish law. She has previously served as an adviser on Jewish law, the head of a beit midrash, or Jewish house of study, and as an attendant at a Jewish ritual bath, or mikvah.

The Bradfield Women’s Institute was founded by Rabbi Shlomo Riskin, who is also the chief rabbi of Efrat and a prominent liberal Modern Orthodox leader. In 2015, his position in Efrat was threatened due to his activism.

The post For the first time, a woman will lead an Israeli Orthodox synagogue appeared first on Jewish Telegraphic Agency.