Food was a comfort for Auschwitz survivors. A new cookbook showcases their recipes — and resilience. 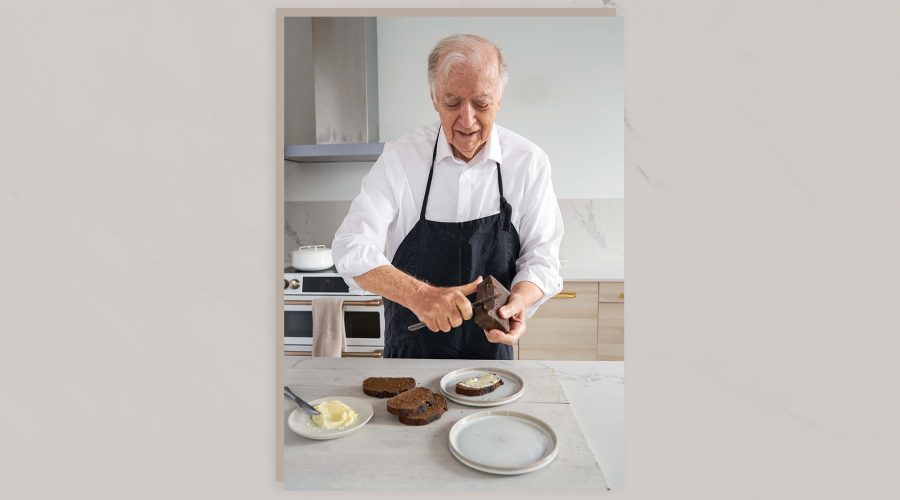 (JTA) — Eugene Ginter was 12 days shy of his sixth birthday when he was liberated from Auschwitz in January 1945. Emaciated and alone, Ginter landed first in a hospital and then in an orphanage in Krakow, the Polish city where he was born. Several months later, miraculously, he was reunited with his mother.

Her first order of business was to help him regain weight and health, but he had no interest in food after being deprived of it for so long. So she created a rich sandwich made of things she knew he liked: black bread thickly coated with butter and finished with grated dark chocolate.

Eight decades later, that “Chocolate Sandwich” is the first recipe in “Honey Cake & Latkes: Recipes from the Old World by the Auschwitz-Birkenau Survivors,” a new cookbook that showcases recipes that connected survivors to the worlds they lost and gave them comfort as they built new lives after the Holocaust.

“She connected food and feeding to life and survival,” said Joe Finkelstein about his mother Goldie, who was famous for serving overabundant quantities of food and whose recipes appear 11 times in the book. “Food was her way to give security and it also gave her some control.”

Like the “Holocaust Survivor Cookbook,” released by Israel’s Yad Vashem Holocaust authority in 2007, “Honey Cake & Latkes” is more than a collection of recipes. It also contains inspiring stories from the survivors as well as archival and contemporary photographs showing their resilience. 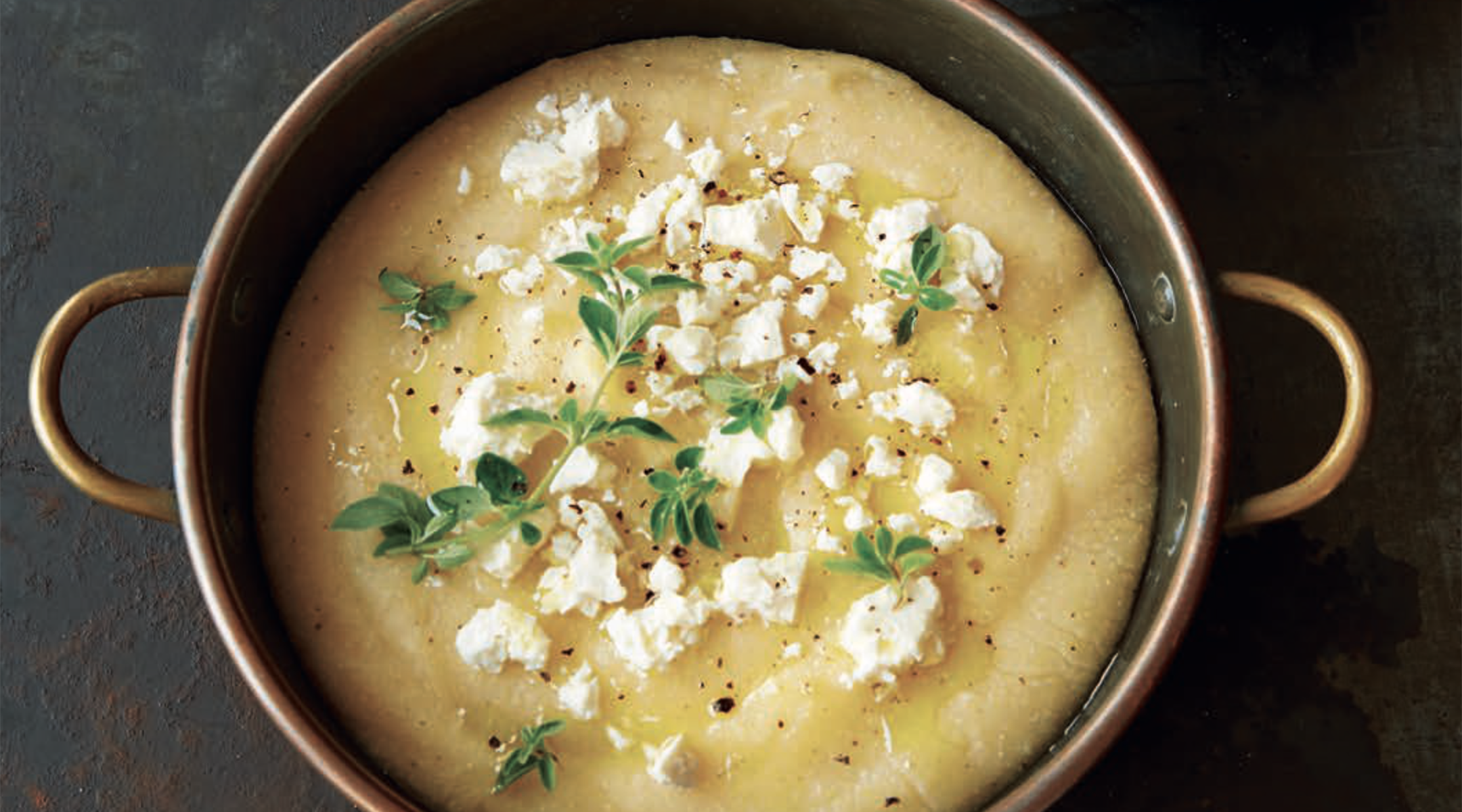 Mamaliga is a typical Romanian side dish made from feta cheese and cornmeal that Alexander Spilberg’s mother often served with plum jam. (Ellen Silverman)

The book took root in January 2020, when Ronald Lauder, the businessman and chairman of the Auschwitz-Birkenau Foundation, brought 120 survivors and their families to Auschwitz to mark the 75th anniversary of their liberation from the Nazis.

Three months after they returned home, on a group Zoom call, Lauder asked the attendees to share their recipes for gefilte fish, the classic Eastern European dish and a personal favorite of his. Maria Zalewska, the foundation’s executive director, subsequently received about 20 versions — from salty to sweet, dense to light — from the people on the call.

Zalewska and Lauder realized that the survivors, even at their ages (the youngest was 76 at the 75th commemoration), were eager to share.

“Food is something they talk about,” said Lauder. “It is their contact with the past.”

With Lauder’s financial support, Zalewska set out to create a cookbook of their recipes. Time was of the essence. Each year several of the remaining survivors died. Lauder and Zalewska were determined to complete the book quickly so as to get it in their hands.

Twenty-nine survivors of Auschwitz and Birkenau, all of whom but one live in the United States and Canada, contributed the 110 recipes in the book and also told their stories from before and during the war. The dishes range from the lovingly devised, like Ginter’s chocolate sandwich, to classic, Old World foods such as David Marks’ rakott krumpli, a Hungarian casserole made of potatoes layered with sour cream and hard-boiled eggs. Other foods have the fingerprints of the New World, like Goldie Finkelstein’s whiskey cake made with Duncan Hines yellow cake mix. 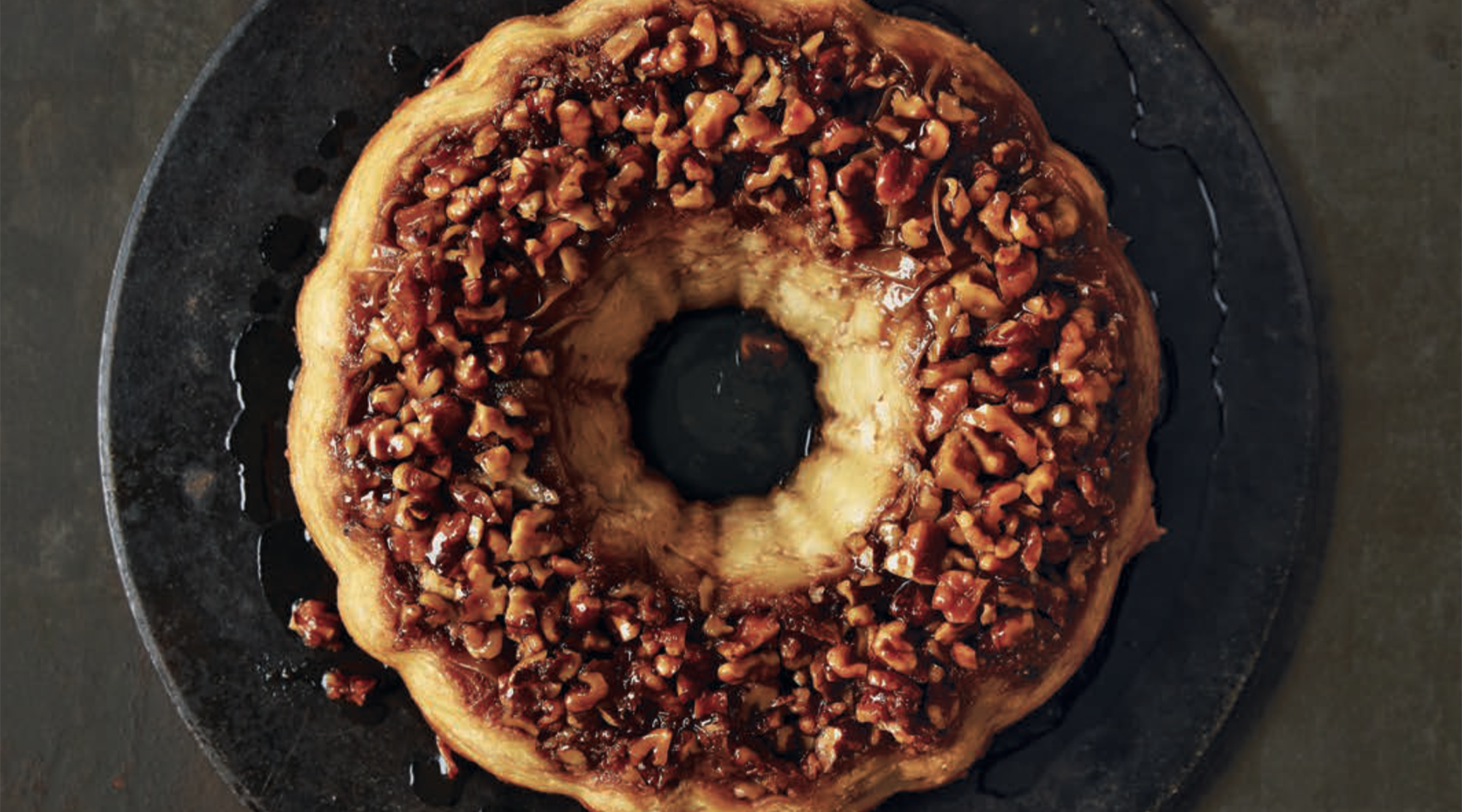 Almost every recipe is preceded by a story: When did the contributors eat a particular dish? Who taught them how to make it? What are their memories of it?

Eva Szepesi shared a recipe for palascinta, Hungarian pancakes that were accompanied by jam that her mother and grandmother made from their backyard apricot tree. Alexander Spilberg’s family couldn’t afford to buy veal before the war, but he learned to make veal paprikash when he moved to Canada; he also contributed a recipe for mamaglia, a typical Romanian side dish his mother served with plum jam. Angela Orosz-Richt, born Dec. 21, 1943 in Barrack C in Auschwitz, never tried the food her mother made before the war. Her submission is madartej, or bird’s milk, a sweet, rich custard her mother made weekly during Orosz-Richt’s childhood in postwar Hungary.

Despite their advanced age and the challenges around gathering during the coronavirus pandemic, five of the survivors met in New York in October 2021 to cook some of the recipes that would be included in the book. Silverman took photographs at the gathering.

Zalewska hoped to create a book that was “elegant and timeless, classic and inviting.” The goal, Zalewska said, was to “strip the images of a specific historical context and focus on just the beauty of the dish. We kept the arrangements minimalistic, and we limited the number of props. We kept the focus on the food.”

That was in keeping with the Holocaust experiences of the survivors featured. “We would talk and dream about compotes and food and so on,” Elisabeth Citrom recalled about her experience in concentration camps. “We lived on nothing but stories about food.”

Citrom’s recipe for eggplant salad tracks the path of her life. Citrom’s mother and grandmother made eggplant salad in Hungarian-controlled Transylvania, where Citrom was raised. But it also was a popular food in postwar Palestine and during the early years of the State of Israel, where Citrom lived immediately following the war. That dish followed her when she and her husband, also a survivor, moved to Sweden to reunite with her father when they learned that he, too, had survived the war. And it evolved into a family favorite for her grandchildren, raised in New York City.

Another contributor, Rachel Roth, was an excellent storyteller, and she would share memories of Shabbat dinners and fragrant dishes with her fellow prisoners while they stood outside in frigid line-ups. “Rachel’s Fantastical Chicken Soup” is a classic recipe finished off with thin noodles and savoy cabbage. Roth, who died in February, went on to have five children and she came to the commemoration in 2020 with three generations of her family. Another contributed matbucha, a tomato and pepper spread with roots in North African cuisine. (Ellen Silverman)

Survivors who did not make it to the 2020 gathering are represented as well. Goldie Finkelstein, the sole survivor of her immediate family in Poland, died in December 2019. The book also includes a recipe for onion-free potato pancakes from Nobel Laureate Elie Wiesel, who died in 2016. Lauder, a close friend of the Wiesel family, contacted the writer’s widow, Marion, for the family’s recipe.

Lauder writes in the book’s foreword that the project is a testament to the power of the human spirit. He hopes that copies will be given as a gift to every Jewish couple at the start of their lives together.

“This book brings a connection to the past,” he said. “There is no stronger connection you can have than food. You generally can’t wear your ancestors’ clothes or visit their homes. But you can prepare the same food.”

—
The post Food was a comfort for Auschwitz survivors. A new cookbook showcases their recipes — and resilience. appeared first on Jewish Telegraphic Agency.