Folk dance is a national pastime in Taiwan. Israeli songs are a big part of the tradition.

YILAN, Taiwan (JTA) — It was a cool spring day in Yilan, a town on Taiwan’s northeast coast known for its picturesque rice fields and delicious spring onions. On a concrete clearing beneath a bridge that doubled as a dance floor, against a cloudy mountainous backdrop dotted with white cranes, about 10 Taiwanese adults danced expertly to classic Israeli folk music — songs such as “Hinei Matov,” “David Melech Yisrael,” “Sulam Yaakov” — and other folk tunes from around the world. Altogether, over 35 dances were practiced over three hours.

For many of these locals, the dances are familiar, almost second nature. All over the age of 50, they grew up at a time when international folk dancing was the only group activity allowed by the nationalist Kuomintang (KMT) government, starting in 1949.

That year, the KMT, which had led the Republic of China up to that point, lost a longstanding civil war to the Communist Party and retreated to Taiwan. Estimates say around 2 million Chinese followed in migrating to the island over the following few years.

The KMT ruled Taiwan in a bubble under strict martial law in order to suppress potential Chinese Communist presence or any anti-government activities. What resulted was heavy censorship of newspapers, books, television, radio and other forms of entertainment, as well as a ban on “unlawful assembly.” The government promoted Chinese culture and the Mandarin Chinese language, banning the study of Taiwanese history, the practice of Taiwanese language, and dancing, claiming that activity was “against morals.”

But there was one reason Taiwanese could gather in groups, and one genre of dance they were allowed to practice — for political and nationalist reasons.

“The entire island was closed. Under those conditions, no one was allowed to [practice other forms of] dance, they couldn’t join these activities because they were controlled. But there was one kind that you could do, and that was folk dance,” says Xu Wenhong, a 57-year-old food sciences professor at Yilan University who organizes weekly folk dance classes. 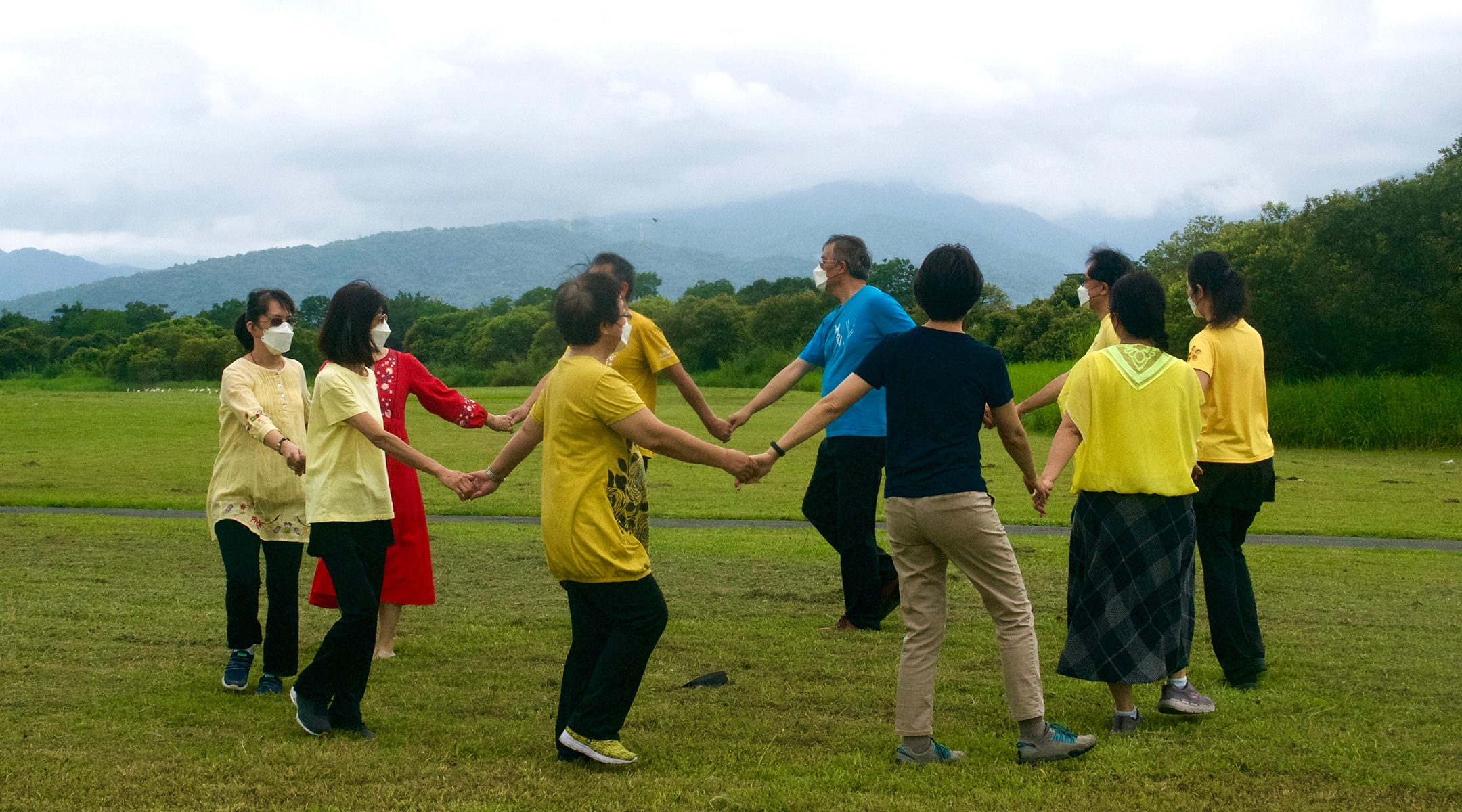 Taiwanese dancers in Yilan practice a Ukrainian circle dance for a global dance rally in support of Ukraine. (Jordyn Haime)

“At the time we really had no form of entertainment. Even certain movies couldn’t be released, they were all controlled,” he said. “So when I was a kid and saw my mother dancing, I thought it looked fun. So when I got to college I joined a club.” There he met his wife, Tsui-yen. The two have been together ever since and lead these regular events in Yilan.

Folk dancing “played a role as both a political tool and a communal activity during and after the Taiwanese Martial Law Period,” wrote Wei-Chi Wu of University of California Riverside in her dissertation on the topic. “For the National Government, international folk dancing was cultural work that assisted it in proposing Taiwanese Nationalism, and to show Taiwan’s alignment with the United States and its opposition to Communist China.”

To that end, in the 1950s, the Taiwanese government invited American dance instructors to introduce dances to teachers across Taiwan, who brought them to their primary schools and universities. Soon nearly all schools here were using folk dances from around the world as an exercise activity for students, and nearly every university had a folk dance club.

At the time, the United States was still offering Taiwan military, political and economic support, before it officially recognized the Communist People’s Republic of China in 1979.

Americans like Rickey Holden, a prominent choreographer and folk dance teacher, brought songs such as “Mayim Mayim” (from Israel), “Shibolet Basadeh” (Israel), and “Wooden Shoes” (Lithuania) to Taiwanese teachers during his first visit in 1957. “Mayim Mayim” — which in Hebrew means “Water, Water” and became known as the “Water Dance” in Chinese — was one of the first folk dances introduced to Taiwan and became synonymous with the activity. Its impact was so significant that Taiwan’s International Folk Dance Association made it the theme of its 50th anniversary seminar in 2007.

Holden also made stops in Japan during his late-1950s tour of Asia, where “Mayim” has since become ingrained in pop culture, and has appeared in commercials and video games.

“It was a kind of internationalization. It let people get ‘worldwide’ experience [when they couldn’t leave the country],” Xu said. “Because we dance other countries’ dances, we can start to learn about other countries’ peoples, how they exist, whether it is with hardship or happiness, we can see these things from dance.”

Fang-chih Chen, a 77-year-old retired teacher and well-known dance instructor in Taiwan, was likely among the first groups of children to practice dance in school. Every day, in the 10 minutes before class started, teachers would dance with students in the school hallways, she remembers.

At that time, the dances known by teachers were still very limited, mostly to Scandinavian and Israeli dances such as “Mayim.”

“Most of the [Israeli] dances were 2/2 or 4/4 beats, and the rhythm was very clear and they were easy for anyone to learn,” Chen said.

Jiaxing Jiang, a 62-year-old in Yilan, said practicing another country’s folk dance lets him feel the spirit of that country or people. What kind of feeling does Israeli dance offer to Taiwanese?

“Strength and unity,” he told me.

Jiang says he is inspired by the way Jews have been able to keep the memory of the Holocaust alive through international literature and film. He showed his family, including his now 25-year-old daughter Lucia, movies such as “Fiddler on the Roof” and “The Pianist.”

Lucia’s grandmother left her home in China for Taiwan in 1945, expecting only to stay temporarily to take care of her sister’s baby. Martial law kept her from returning home, but when she met her husband and decided to continue her education here, Taiwan began to feel more like home.

“I also enjoy the movies about our history,” Lucia said. “I didn’t really connect these two parts of history together before, but I think we have a similar background. They have some connections, some similarities. And I think to me, to see Israel so strong now, I think it’s encouraging.”

Lucia isn’t the only one who thinks this way. As Taiwan faces growing hostility from China, which claims the island as its territory, some commentators idealize Israel as a model of military strength and nation building.

“Some of the gestures are praising god, or to honor the rain, to thank god for giving them rain because they lived in the desert,” Lucia said. Although she isn’t religious, she said that “when I was dancing I felt very peaceful and happy. I felt the same way, like I respect everything that the world gives me, like rain, food, everything.”

When Taiwan’s martial law was lifted in 1987, folk dance largely fell out of style. For the first time, Taiwanese were able to experiment with styles like hip-hop, jazz and street dancing. Native Taiwanese dances and indigenous dances resurfaced too. Today, few schools still teach children folk dancing and few colleges have remaining clubs.

Though Lucia still occasionally joins her parents for a dance class, she sees it now as an activity “for a certain age of people, not for everyone.”

But Israeli dances remain popular among the international folk dance groups that remain because of the abundance of new dances that have emerged from Israel over the years, especially those choreographed to Israeli pop music, said Chen, the longtime dance teacher. Some have even applied Israeli dance moves to popular Taiwanese music. Groups have been able to attract more participants purely by including Israeli dances and music in their practice.

So despite the overall decline in popularity, Chen and Xu, the teacher from Yilan, don’t sound too discouraged. Both still practice with groups who meet regularly and, in pre-pandemic times, traveled regularly to dance festivals around the world, inviting foreign teachers to events like the annual Asia Dance Camp in Taiwan, one of the most famous international folk dancing events in the world.

“The younger generation now has better opportunities than in the past. Fortunately, they can go anywhere and learn the dance of that country. I’m very comforted and happy when I see them dancing,” Chen said.

—
The post Folk dance is a national pastime in Taiwan. Israeli songs are a big part of the tradition. appeared first on Jewish Telegraphic Agency.