Florida’s Jews are front-and-center in the abortion fight 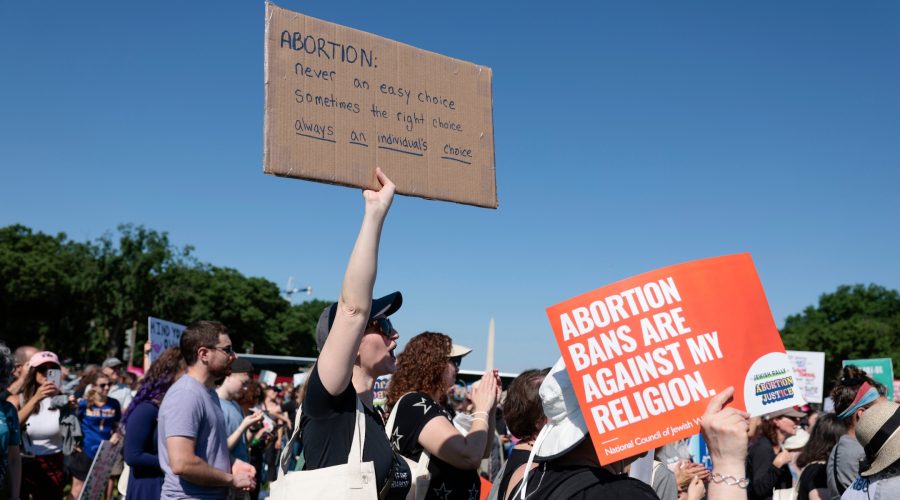 (JTA) — Florida Gov. Ron DeSantis ratcheted up the fight over the state’s looming 15-week abortion ban Thursday when he suspended a Tampa-area state attorney who had vowed not to prosecute violations.

The move also vaulted yet another Jewish figure into the fight’s foreground.

Andrew Warren, the state attorney for Hillsborough County, had joined more than 90 other attorneys nationwide in pledging not to prosecute individuals who seek or provide abortions in the wake of the U.S. Supreme Court’s decision in June to overturn Roe v. Wade, the 1973 ruling that had guaranteed abortion rights.

“Criminalizing and prosecuting individuals who seek or provide abortion care makes a mockery of justice,” the letter said. “Prosecutors should not be part of that.”

Warren, who has said that his Jewish identity has shaped his government career, joins other Florida Jews in prominent positions in the fight to protecting access to abortion: A South Florida synagogue making a religious freedom argument spearheaded the first lawsuit filed against Florida’s abortion ban, and a Jewish political activist who came to prominence by protesting against DeSantis’ pandemic rules has signed on to represent the congregation.

Andrew Warren, the former state attorney for Hillsborough County, Florida, was suspended from his position on Thursday morning by Gov. Ron DeSantis, due to his refusal to criminally prosecute abortions. (Getty)

Warren grew up in a Conservative Jewish family and in 1999 graduated from Brandeis University, where he was president of the university’s Jewish fraternity AEPi chapter and attended High Holiday and Shabbat services. In 2018, Warren told the fraternity that he credits his Jewish college experience with preparing him to enter government work.

“The lesson of Tikkun Olam and giving back to the world resonates with me even now in my career,” he said, using the Hebrew term meaning “repairing the world” that often refers to social justice ideals. “It’s hard to separate that from my professional life so I can thank my parents for instilling those values in me early on.”

Nationwide, Jewish activism for abortion protections has also taken flight. The National Council of Jewish Women and its Rabbis for Repro initiative have been organizing rallies and abortion funds since the Supreme Court’s decision in Dobbs v. Jackson Women’s Health Organization was leaked in May.

But Florida’s Jews have been uniquely positioned as leaders in the state fight for abortion protections. In June, Congregation L’Dor Va-Dor in Boynton Beach filed a lawsuit alleging that Florida House Bill 5, which prohibits abortions after 15 weeks, violates Floridians’ right to privacy and freedom of religion on the grounds that it “prohibits Jewish women from practicing their faith free of government intrusion and this violates their privacy rights and religious freedom.”

Rabbi Barry Silver of L’Dor Va-Dor, who is also a civil rights attorney and filed the suit, said he is glad to see Jews taking the lead on religious freedom issues like abortion.

“We know what happens when the wall of separation between church and state is torn down,” Silver told the Jewish Telegraphic Agency. “It’s always bad for Jewish people, and then it’s bad for everybody else.”

On Monday, five other religion-based lawsuits were filed in the state of Florida, including three by South Florida synagogues who allege that the law amounts to religious discrimination because Jewish law permits and sometimes requires abortions.

Daniel Uhlfelder, a Jewish candidate for attorney general who joined the L’Dor Va-Dor lawsuit as co-counsel, said it was only natural that Florida’s substantial Jewish population would play a starring role in the fight over abortion rights.

“We have a sixth sense for authoritarianism,” Uhlfelder said. “We know what it is, what it looks like, so it’s not surprising that Jewish folks are sometimes ahead of the curve on spotting it and doing things about it.”

—
The post Florida’s Jews are front-and-center in the abortion fight appeared first on Jewish Telegraphic Agency.