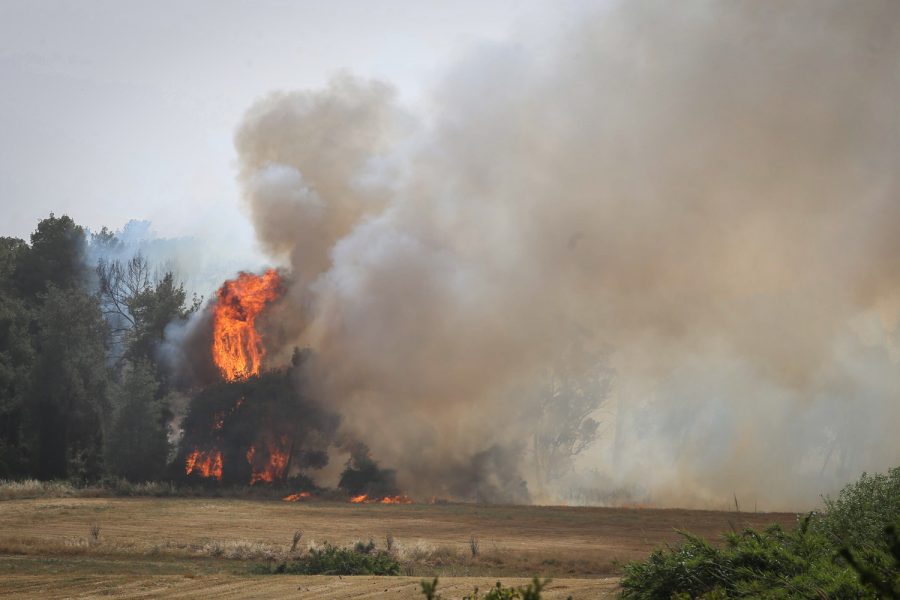 A fire rages in the Ben Shemen Forest in central Israel on May 23, 2019. Massive fires blazed throughout the country, which is blanketed in a heat wave. Photo: Flash90

JERUSALEM (JTA) — Israel is on red alert over outbreaks of fires across the country, some on a massive scale. At least one community, founded by the late Rabbi Shlomo Carlebach, has been burned to the ground.

Fires on Thursday were out of control in the Jerusalem area, near Hebron and in the center of the country. There has been a full mobilization of firefighters across the country as well as calls for assistance from volunteer firefighters.

Israeli Prime Minister Benjamin Netanyahu on Thursday evening ordered his government ministers to request foreign assistance to put out the blazes, including air support to help in the effort.

Earlier in the day, Southern District Fire Department Chief Shmulik Friedman that the country could request air assistance from Cyprus, Greece and Croatia, according to the Kan national broadcaster.

Homes were evacuated in Beit Hagai, in the southern Hebron Hills in the West Bank and in at least five other communities.

In Mevo Modiim in central Israel, which was founded by Carlebach in 1975, residents were evacuated and most of the homes in the community reportedly have been burned to the ground. Carlebach, best known as a composer of Jewish music and as spiritual leader to religious Jews in the counterculture, lived there and in Canada before his death in 1994.

As of Thursday evening an out-of-control fire in the Ben Shemen Forest continued to burn. Route 443 connecting Tel Aviv and Jerusalem, was closed in both directions due to fires in and around Jerusalem, as were several other roads.

In Beitar Ilit an apartment building caught fire and several people including a mother and her children had to be rescued by firefighters. Three of them were taken to the hospital with fire-related injuries.

An extreme heat wave has blanketed Israel for several days. Temperatures on Wednesday hovered in the high 90s and went up into the 100s on Thursday. They are forecast to climb as high as 110 to 115 Fahrenheit by Friday throughout most of the Jewish state. The hot and dry weather had led to fears of widespread fires.

Some, but not all, of the fires were sparked by embers from Lag b’Omer bonfires on Wednesday night that were not properly or completely extinguished, according to officials.

Israel Railways announced on Thursday that the extremely hot weather could cause delays and disruptions in train services throughout the country since the high temperatures cause the steel on the railway tracks to expand, slowing the trains.

Meanwhile, several fires are burning in communities in southern Israel located close to the Gaza border. Fire officials said that some of those fires were sparked by balloons carrying explosives sent from Gaza. The fires have destroyed dozens of acres of woodlands and burned up a wheat field outside of Kibbutz Nahal Oz. On Wednesday at least six fires were started by the incendiary balloons.