Fed up with Shabbat laws, secular Israelis fund bus service to the beach 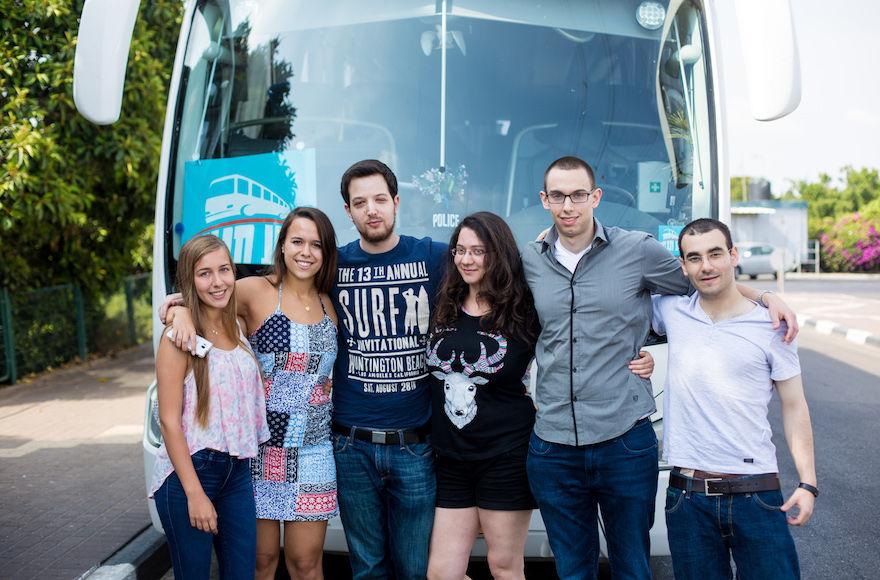 Andrew Tobin
TEL AVIV (JTA) – These secular Israelis are done playing by the rules on Shabbat. They’re going to the beach.

Noa Tnua, a tiny Tel Aviv busing cooperative, has crowdfunded hundreds of thousands of shekels to dramatically expand its service to the coast on the weekends, when most of the country’s public transportation shuts down to observe the day of rest. Some 2,600 Israelis have donated online — a record this year on the popular Headstart platform this year.

“The success of this campaign shows just how fed up people are with the situation on Shabbat,” said Noa Tnua founder and chairman Roy Schwartz Tichon. “If you can’t afford a car in Israel, you’re stuck at home on the weekend.”

The unexpected influx of more than 313,000 shekels ($87,000) and counting since March 15 — nearly doubling Noa Tnua’s original target — has been driven by widespread frustration with Israel’s Shabbat ban on public transportation. But backers of Israel’s religious “status quo” — fiercely guarded by haredi Orthodox politicians — have called such initiatives a threat to the state’s Jewish character.

Noa Tnua, which means Move Forward in Hebrew, has pledged to use its crowdfunded windfall to open two new bus lines this summer — one along Route 18 from Tel Aviv south to Jaffa and Bat Yam, and another from the Negev city of Beersheba to the coastal town of Ashkelon. A public survey to determine the location of a third line has been scheduled for June.

The group also said it will offer soldiers free rides on Route 18 until the end of the year and give away at least 180,000 shekels ($50,000) in rides to disadvantaged populations. The campaign will end Sunday.

Schwartz Tichon, a 24-year-old student at the Open University, opened Noa Tnua’s first bus line in June 2015 along the busy Route 63 between Tel Aviv and its Ramat Gan and Givatayim suburbs. Using money he saved during his mandatory army service, he started the nonprofit along with board members Noam Tel-Verem, 25, and Lior Tavori, 32.

Every Saturday, a rented 53-seat tour bus traverses the route five times, making about 30 stops, from 9 a.m. to 6 p.m. Nearly 2,000 people have signed up for the service to date, with hundreds using it on summer weekends.

Elia Halpern, 46, a court stenographer and single mom from Ramat Gan, has been a Noa Tnua rider from the beginning. She said getting access to the bus was like “being released from prison.” Before discovering Noa Tnua on Facebook, she had mostly spent her Saturdays at home because she cannot afford a car or taxi rides to nearby Tel Aviv and back.

“Now we go see movies or visit my family in Tel Aviv,” Halpern said. “I recently took my son to the beach on Saturday for the first time. He was so excited. Roy has really done something amazing for me and other people in the area.”

Israel prohibits most public transportation on Shabbat based on an understanding reached in 1947 between then-Prime Minister David Ben-Gurion and the Agudath Yisrael movement, which represented the small haredi Orthodox community of the time. That status-quo agreement became the basis for many religious arrangements in Israel, including in the areas of kashrut, marriage and education.

Allowances and loopholes in the Transportation Ministry’s regulations, passed in 1991, let a limited number of bus lines operate on Shabbat. Haifa and Eilat, cities with large non-Jewish populations, are allowed to have bus services. And shuttles, or “sheiruts,” run in and between some cities based on the claim that they address a vital transportation need, as allowed in the regulations.

In Jerusalem, a private bus service called Shabus has run since 2015. By working as a collective, the group circumvents the requirement that it be licensed by the government. Noa Tnua is similarly structured. Members sign up online for free, and pay 9 shekels per ride via the smartphone app HopOp, which processes the payments after Shabbat.

While Israelis have complex and varied views on issues of synagogue and state, there is broad support for public transportation on Shabbat. A survey commissioned last year by Hiddush, a group that promotes religious pluralism, found that 72 percent support keeping at least some buses and shuttles running between Friday afternoon and Saturday evening.

Hundreds of donors posted supportive comments on Noa Tnua’s crowdfunding page, with many complaining about the status quo.

“A successful project. Whenever there is religious coercion, those interested in maintaining a free state must unite,” one wrote Thursday.

“A most welcome initiative until this country regains its senses and there is full public transportation for the entire population,” wrote another.

Schwartz Tichon, who grew up in Haifa taking Shabbat buses for granted, said the Orthodox should not be able to dictate how the whole country spends the weekend, especially when the biggest impact is on the poor. He said his ultimate goal is to make public transportation on Shabbat a reality that the government would simply have to accept.

“If three-quarters of the country wants something, eventually it will get it,” he said. “We’re the ‘Start-up Nation,’ we know how to change things.”

But few are holding their breath for action by Israel’s Knesset, where haredi political parties wield considerable clout, especially on religious issues. Haredim and their supporters have argued Shabbat must be protected for the sake of Jewish unity. In a debate with Schwartz Tichon last week on Israel’s Channel 10 TV station, haredi journalist Benny Rabinovich sounded this theme and vowed to relentlessly oppose Noa Tnua.

“If we want to remain a Jewish state — the secular, religious, haredim, Ashkenazim, Sephardim, all of us — the only thing that makes it Jewish is the Shabbat. Nothing else,” Rabinovich said. “I’ll make sure this bus line is closed because you’re taking actions that are against the law. I promise you that I’ll do whatever it takes in the Transportation Ministry. I will not give up.”