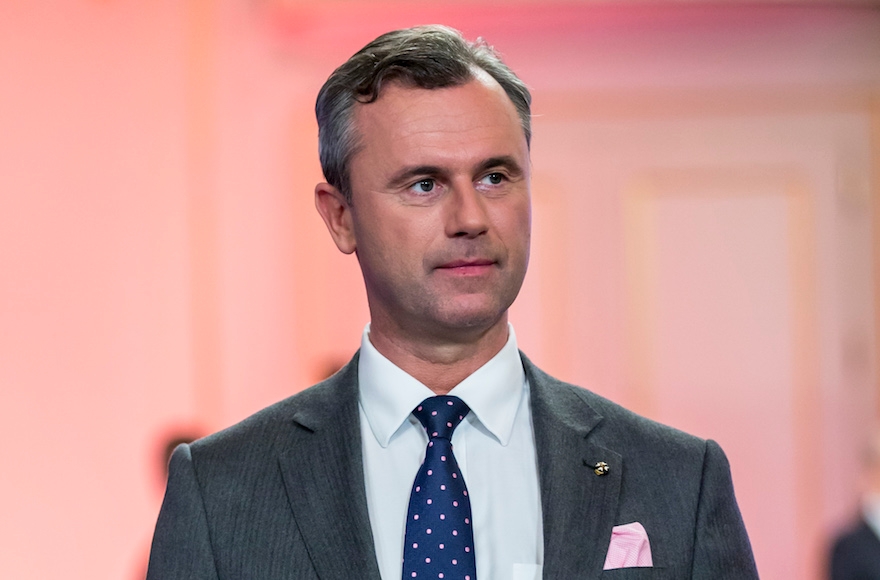 Freedom Party candidate Norbert Hofer conceded Sunday on his Facebook page after initial projections showed Van der Bellen, backed by the Green Party, with an estimated 53.6 percent of the vote to Hofer’s 46.4 percent.

The office of president is a largely ceremonial post in Austria.

The election was a do-over following irregularities in an election in May when Hofer garnered May 49.7 percent of the vote, narrowly losing to Van der Bellen.

In Paris, several hundred Jews applauded and cheered upon hearing of Hofer’s loss during a debate at the annual convention of the CRIF umbrella group of French Jewish communities. Christine Ockrent, a well-known journalist, prefaced her announcement during the event’s main debate on the global effects of the U.S. presidential elections with the words: “I have good news.”

Many Austrian Jews, one of Europe’s smallest communities with 8,000 members, warned Hofer’s popularity might lead the far right in Europe to a significant victory. However, the Freedom Party does have some Jewish supporters and officials.

The party has joined other far-right movements in Europe in their efforts of recent years to move into the mainstream, shed their Nazi image and leave behind the anti-Semitic rhetoric of some of their former leaders.

The European Jewish Congress on Sunday evening welcomed the Austrian presidential election results. “We join democrats and all right-minded people in Austria and across Europe in breathing a sigh of relief that the first openly racist and xenophobic head of state was not elected on our continent,” Dr. Moshe Kantor, president of the EJC, said in a statement. “This would not just have been a disaster for Austria but also for Europe, as it might have given a strong tailwind for other similar extremists across the continent, like the National Front leader Marine Le Pen who is competing in the upcoming French presidential elections.”

“We hope that this creates momentum for mainstream and decent politicians to start to fight back against those who are using recent economic and social upheavals to push their intolerant agenda,” Kantor continued.