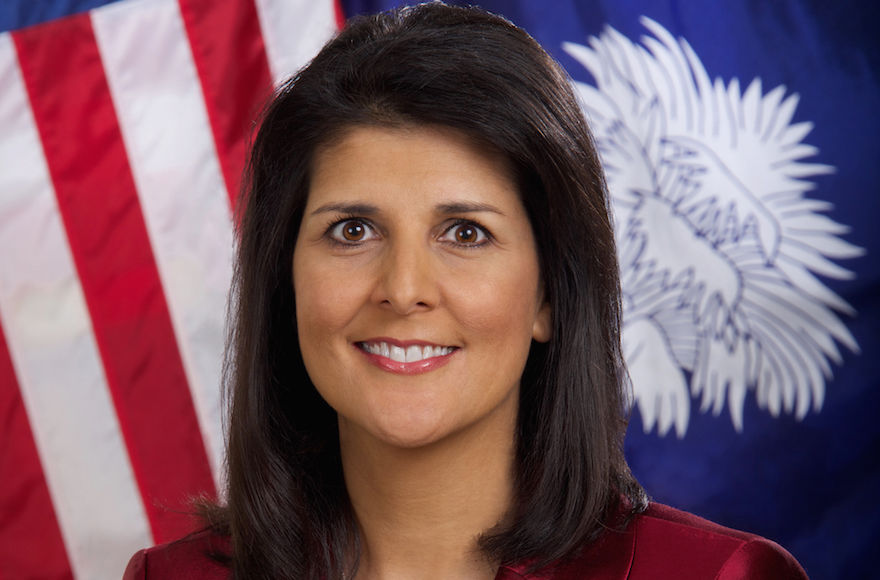 Ron Kampeas
WASHINGTON (JTA) — The United Nations’ most consistent record of failure is with Israel, according to Nikki Haley, President-elect Donald Trump’s nominee to be ambassador to the world body.

Haley’s confirmation hearings in the Senate are set to begin Wednesday and her broadside against the U.N.’s treatment of Israel appears in prepared remarks obtained by Reuters ahead of the hearings.

“Nowhere has the U.N.’s failure been more consistent and more outrageous than in its bias against our close ally Israel,” Haley, who has been the governor of South Carolina since 2011, will say, according to Reuters.

Trump, along with most Republicans in Congress and much of the mainstream pro-Israel community, condemned the outgoing Obama administration’s decision last month to allow through a U.N. Security Council resolution condemning Israel’s settlement policies.

Trump also has said, and Haley echoed in her remarks, that he will review the U.S. relationship with the United Nations. Republican senators have introduced a bill that would cut U.S. funding, currently comprising about 22 percent of the total U.N. budget, until the Security Council repeals the resolution.

The American Jewish Committee on Tuesday sent a letter to the Senate Foreign Affairs Committee with questions it would like senators to pose to Haley. The letter reflected agreement with Trump and Haley over the U.N.’s anti-Israel bias, but also defended the utility of the body in maintaining world peace.

“Over the years the world body has too often failed to live up to the principles enshrined in its Charter,” said the letter from Jason Isaacson, the AJC director for policy. “Notwithstanding, the U.N. is part of today’s international system, and without it, we believe, the world could become even more dangerous and be denied the benefit of the U.N.’s key specialized functions,” Isaacson said.

“What actions will Gov. Haley take to help ensure America’s full participation – and leadership – in the work of the U.N.? What steps will she recommend to steer the U.N. back to its rightful path?” is the question for Haley in the AJC letter.