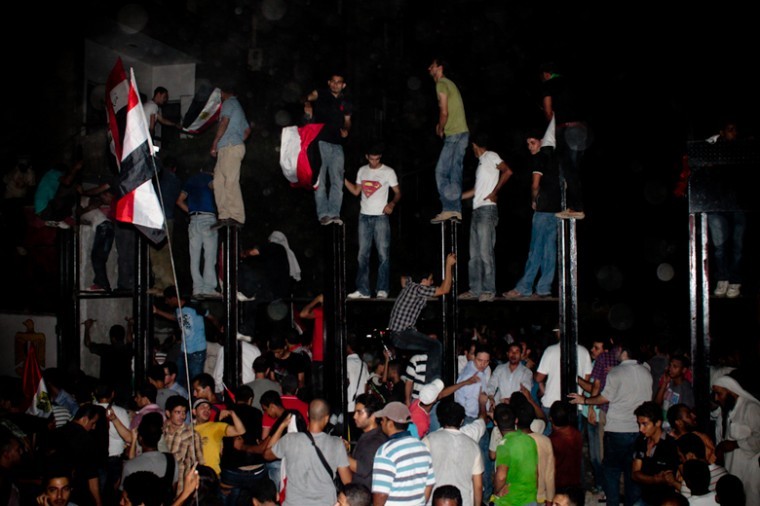 Retired Israeli Air Force pilot Uri Dromi remembers the day 34 years ago when Egyptian President Anwar Sadat landed in Israel to tell the Israeli people that he was ready to make peace.

Dromi, who had flown missions in the 1967 Six-Day War against Egypt, had been assigned to escort the Egyptian air crew during Sadat’s visit.

“I was standing there on the tarmac and suddenly there’s this big airliner with Egyptian markings being escorted by three Israeli jet fighters,” Dromi told JTA. “It turns and lands. The door opens and there stands Anwar Sadat, who until then had been the leader of our greatest enemy. This is one of the moments I will always cherish.”

Today, Dromi, who runs the Mishkenot Sha’ananim conference center in Jerusalem and organizes briefings for journalists, is worried that the historic peace between Egypt and Israel could be unraveling.

Last week’s attack on the Israeli Embassy in Cairo by a mob of thousands of Egyptians has him worried.

“I think it is serious because there’s a lot of energy there,” Dromi said. “The anti-Israel sentiment was always there, but it was marginal compared to the problems Egyptians had. Now Egyptians are expressing all of their anger and frustration against Israel.”

The embassy attack, during which a mob pulled down the embassy walls, broke into the building and rampaged for several hours while six Israeli security guards were trapped inside, was the latest and perhaps most worrisome in a series of events south of the border that have Israel concerned that it faces a game-changer with the new Egypt.

Most worrisome, some Israeli officials said, was their inability to reach senior Egyptian officials quickly. Instead they had to rely on U.S. mediation.

Egyptian commandos eventually arrived to rescue the trapped Israelis, and Israel sent its Air Force jets to retrieve them and bring them home. The official said he does not expect the embassy to reopen soon but that there are contacts with Egyptian security officials.

“We are discussing how to ensure that such an attack will never happen again and what is needed to be done to secure the reopening of the embassy,” he said. “We are definitely worried. Which way Egypt is going is anybody’s guess.”

The Egyptian military council running the country quickly condemned the attack, called the rioters “criminals” and said it would launch criminal proceedings against those caught.

“The Egyptian leadership said they are committed to the peace treaty, and so are we,” Israeli government spokesman Mark Regev told JTA. “Anyone over 50 remembers the Egyptian-Israeli wars in which thousands of people on both sides of the frontier were killed. I don’t think the people of Israel or Egypt want to go back to that.”

The 32-year-old peace treaty between Israel and Egypt is one of the cornerstones of Israel’s security doctrine. While it has resulted in few people-to-people ties, the pact made Israel’s southern border reliably quiet and freed up Israel’s military to focus on threats elsewhere.

“We’ve always had a saying that without Egypt there’s no war and without Syria there’s no peace,” said Yehuda Ben Meir, an analyst at the INSS think tank at Tel Aviv University. “Even when relations were cold, the peace treaty was solid.”

Under Hosni Mubarak, who ruled Egypt from Sadat’s assassination in 1981 until he was deposed early this year, Egypt established military and intelligence cooperation with Israel. Both Egypt and Israel viewed Hamas’ growing strength warily, and Egyptian security forces tried to stop the smuggling of weapons and terrorists from the Sinai into Hamas-ruled Gaza. Since Mubarak’s ouster, Israeli intelligence officials say, smuggling has dramatically increased.

Despite a recent poll showing that more than half of Egyptians would support severing ties with Israel, most Israeli experts don’t believe Egypt will rush to abrogate its peace treaty with Israel. Most of the Egyptian political factions, including the Muslim Brotherhood, have said they will continue the peace treaty. Cutting off ties also would threaten the $3 billion in foreign aid that Egypt receives annually from the United States.

But Israel is concerned. The attack on the embassy came just weeks after a terrorist attack on the border between Israel and Egypt that left eight Israelis dead. Israeli officials said the terrorists traveled from Gaza to Egypt and then into Israel. Three Egyptian security officers were killed inadvertently in firefights after the attack.

“Peace with Egypt has always been a cornerstone of our strategic position in the region,” Dromi said. “Whatever else happened with Lebanon or Syria, we always had that peace to offset everything else. If this falls, there could be a chain reaction. We’re already hearing rhetoric from Jordan that we haven’t heard in a very long time.”

King Abdullah of Jordan, which is the only other Arab country besides Egypt that has a formal peace treaty with Israel, said this week that “Jordan and the future of the Palestinian people are in better shape than Israel today. Now it is Israel that is fearful.”

Israeli officials said they are working hard to repair relations with Egypt. But Prime Minister Benjamin Netanyahu this week also ordered Israel to speed up construction on a fence being built between Israel and the Sinai to try to stop smuggling. He said construction will finished by September 2012.

“Israel’s border with Egypt is a border of peace,” Netanyahu said while visiting the area. “To continue the peace, there must be security and to this end a fence is necessary. Its rapid construction is important for both peace and security.”