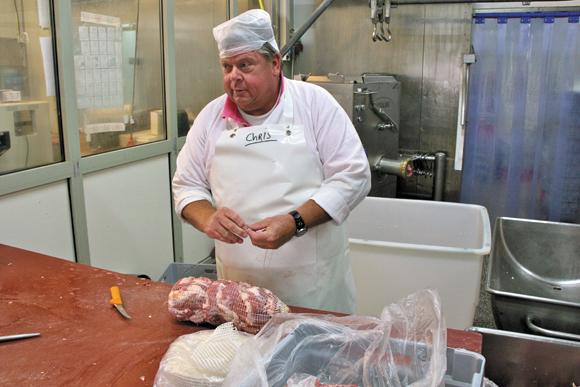 AMSTERDAM – A few streets over from the bookstore where Anne Frank bought her famous diary, the only kosher butcher shop in Holland is bustling. Two employees man the long counter at Slagerij Marcus, pausing from chopping meat to sell customers a bit of this or that for Shabbat dinner.

In the wake of an overwhelming vote by the Dutch House of Representatives to ban the type of ritual slaughter required for kosher and halal meat, this butcher shop famous for its handmade sausage is at the front lines of a battle between two competing ideals in Holland: freedom of religion and animal welfare.

What put shechitah, or kosher slaughter, in the crosshairs was an unlikely convergence between animal rights activists and Holland’s far-right, anti-Muslim movement.

The Party for the Animals is interested in banning all forms of what it considers inhumane slaughter, while the Freedom Party led by firebrand Geert Wilders is interested in making Holland inhospitable to Muslims. For Wilders, who in 2009 called Islam “the ideology of a retarded culture,” the impact on shechitah is collateral damage.

“It’s a shift from the Netherlands as an open society to the Netherlands as a closed, monocultural society,” said Joel Erwteman, a Jewish lawyer who helped Dutch Jewish leaders draft a position paper opposing the slaughter bill. “It’s becoming completely normal to talk about Muslims as being a problem.”

Kosher slaughter seems secure for now – the Parliament is on recess until September, and approval by the Dutch Senate, a key step for the measure to become law, is no guarantee.

If the ban does pass, Jewish leaders plan to challenge it in court, arguing that the guarantee of freedom of religion enshrined in the European Convention on Human Rights precludes banning shechitah. The law also could be amended to make an exception for kosher slaughter if it can be proven that no additional harm is caused to animals by killing them the kosher way.

And if that fails, Dutch Jews easily could procure kosher meat by importing it legally from nearby countries.

But for many Jews in the country, the most disconcerting element of the drive to outlaw shechitah isn’t so much the legality of kosher slaughter per se but the symbolism of Holland’s move to outlaw a basic element of Jewish life. It’s a sign, some say, that after 400 years of a Jewish presence in the Netherlands, the traditions of the country’s approximately 40,000 Jews count for little.

“Do I want to be in a society that acts like this?” Erwteman said. “I don’t think many of us are feeling very welcome right now.”

Rabbi Binyomin Jacobs, president of the Dutch union of rabbis and chief rabbi of the country’s Inter-Provincial Chief Rabbinate, said the proposed law reflects the growing feeling in Dutch society that religion is something to be feared, or at least kept at arms’ length.

“They put it on the level of fairy tales,” he said of religion, while elevating animal rights to an article of faith. “They can be so fanatic that they care more about the animals than they do about the feelings of the people.”

Jacobs, who says that some 500 Dutch Jewish families keep kosher, worries that the shechitah ban is the first step on the road to an eventual prohibition against circumcision. He noted that the prospect of a ban is especially disturbing for Holocaust survivors because the Nazis imposed a ban on shechitah as one of their first acts after invading the Netherlands in 1940.

Esther Voet, editor of a Dutch Jewish newsweekly called Nieuw Israelietisch Weekblad, said opposition to the bill would have been stronger had the community’s liberal and Orthodox factions unified more quickly in opposition.

Still, the Jewish community did bring out the big guns to stop the legislation.

Among the 30 parliamentarians who voted against the bill were several non-Jewish members of religious political parties. One of them, Esme Wiegman of the Christian Union Party, visited the kosher slaughterhouse to see for herself how the animals are killed.

Wiegman told JTA that Dutch politicians who are not religious have a difficult time grasping the centrality of religious rituals to the lives of the devout. She said the move to outlaw shechitah was a matter of religious freedom for all, not just for Jews.

There are several kosher stores in the leafy Amsterdam neighborhood of Buitenveldert, near the city’s world trade center and cluster of skyscrapers.

The initiative against shechitah was the brainchild of the fledgling Party for the Animals, which holds just two seats in the 150-seat Dutch House and one in the 75-seat Senate. The far-left party argues that stunning an animal is more humane than the razor-sharp knife used in kosher slaughter. A representative told JTA that the party’s leader, Marianne Thieme, was unavailable for comment due to the legislative recess.

The animal rights party framed the debate as a stark choice between the mutually exclusive goals of religious freedom and animal welfare, Erwteman said.

“Do you think that an animal should suffer more because of the religion of the person who killed it? That’s the way they phrased it,” he said. “I think most of the parties felt compelled to answer that question with no.”

Holland is not the first European country to consider banning shechitah. Sweden, Norway, Luxembourg and Switzerland already ban kosher slaughter, though they all allow the import of kosher meat.

The question now is whether Holland will join that club.