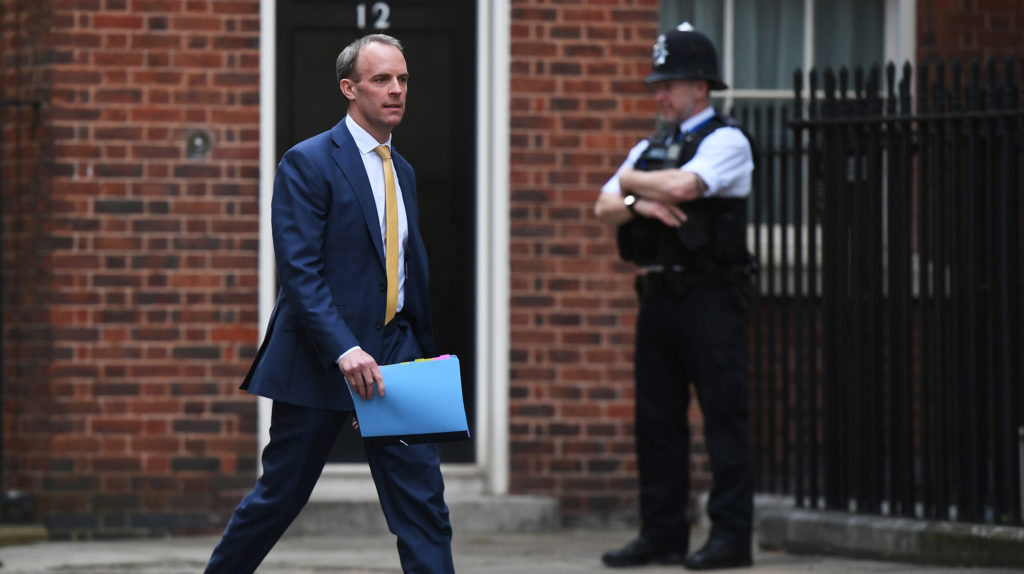 (JTA) — The United Kingdom last had a Jewish prime minister in 1880, the final year of Benjamin Disraeli‘s service.

Now, with the coronavirus sending Boris Johnson to the hospital, the country is again being run by a man with Jewish roots: Foreign Secretary Dominic Raab took over Monday after the prime minister was moved into intensive care.

At his first news conference in the role, Raab said that Johnson was “receiving standard oxygen treatment and breathing without any assistance.” He added that Johnson “will pull through because if there is one thing that I know about this prime minister, he is a fighter and he will be back leading us through this crisis in short order.”

His background: Raab’s father, Peter, was a Jewish refugee who immigrated to Britain at the age of 7 from what was then Czechoslovakia following the Nazi annexations there in 1938. Peter Raab died in 1986, when his son was 12, according to the Daily Mail.

Raab was raised in the Church of England before marrying a Brazilian Catholic woman, according to ITV. He studied to become a lawyer at Cambridge and joined the Foreign Secretary in 2000.

Raab, 46, does not identify himself as Jewish. Though multiple media outlets in the United Kingdom have noted that his father was Jewish, Raab rarely acknowledges this part of his background.

In a 2019 interview with ITV, pointing at family pictures, he said: “That’s my dad with his mum, and they were … Grew up and had their family in Carlsbad, lovely middle-class part of Czechoslovakia and then, of course, came over, fled when the Nazis took over in 1938.”

However, at multiple town hall meetings, Raab has referenced his father’s story to show he understands and supports immigration, as long as it is controlled and its effects are measured.

Raised by a single mother who later had cancer twice, he devoted much of his youth to training in karate and now is a black belt in the sport. He’s married to marketing executive Erika Rey, with whom he has two children.

His views: Seen as a tough negotiator and uncompromising supporter of Brexit, he held the Brexit portfolio under former prime minister Theresa May. But he resigned on Nov. 15, 2018, in opposition of the terms of a deal that May had tried to seal. Pro-Brexit critics, including Raab and Johnson, said the agreement was too soft.

Raab returned to the Cabinet under Johnson, becoming his second in command.

Raab has criticized Israeli settlement construction for undermining prospects for a contiguous Palestinian state. He also has rejected calls to recognize a Palestinian state before a peace deal is reached between the Israelis and Palestinians.