Does Israel give Jewish extremists a pass on violence against Arabs? 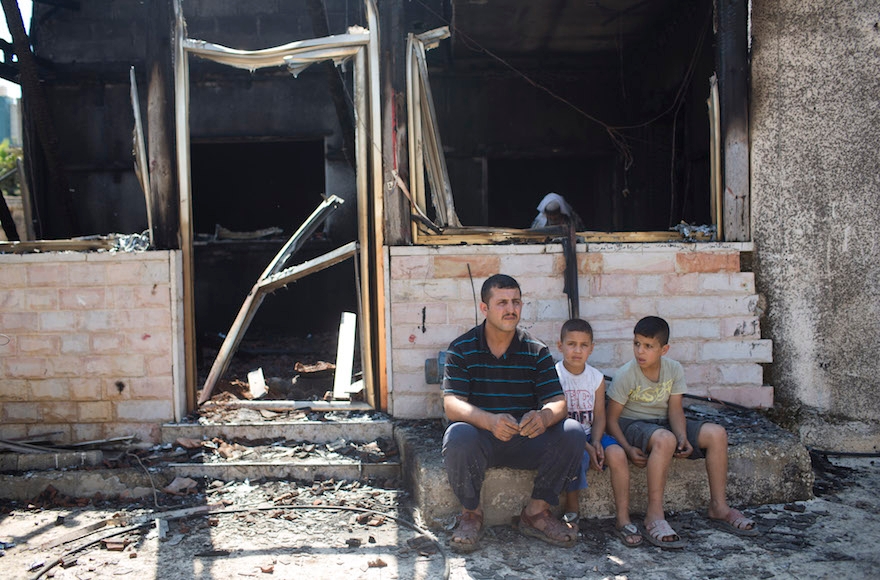 (JTA) – There are some striking similarities between last week’s arson attack on a Palestinian home that killed an 18-month-old boy and last summer’s kidnapping and immolation of a 16-year-old Palestinian, Mohammed Abu Khdeir.

Then, as now, Jewish extremists were the prime suspects in the attack. Then, as now, the murder horrified many Israelis and was condemned by Israeli officials, including Prime Minister Benjamin Netanyahu. Then, as now, Netanyahu used the incident as an opportunity to drive home the argument that Palestinian society celebrates murder whereas Israeli society deplores it.

“There, murderers are received as heroes, and city squares are named in their honor,” Netanyahu said of Palestinians after the killing of Abu Khdeir, which was later acknowledged by the perpetrators to be revenge for the kidnapping and abduction of three Israeli teens in the West Bank whose bodies had been found two days earlier. “I know that in our society, the society of Israel, there is no place for such murderers.”

Netanyahu sounded a nearly identical note this time after the attack in Duma, a West Bank village, left Ali Dawabsheh dead and his 4-year-old brother and parents in critical condition. The two masked perpetrators scrawled the Hebrew words for “revenge” and “Long live the king messiah” at the site. (Nobody has taken responsibility for the attack, which some have speculated was revenge by Jewish extremists for the Israeli government’s demolition last week of two illegal buildings in the West Bank settlement of Beit El.)

“This is what distinguishes us from our neighbors,” Netanyahu said. “We deplore and condemn these murderers. We will pursue them to the end. They name public squares after the murderers of children. This distinction cannot be blurred or covered up.”

Israel, by contrast, “takes a strong line against terrorism regardless of who the perpetrators are,” he said.

But by almost all accounts, it’s not true that Israel treats Jewish terrorists and Palestinian terrorists the same way.

Less than 2 percent of complaints submitted to the Israel Police by Palestinians lead to an effective investigation, arrest and conviction, according to the Israeli human rights group Yesh Din. Of the 15 firebombings of Palestinian homes in the West Bank since 2008 by suspected Jewish terrorists, no assailants have been caught, according to a report on Israel’s Channel 2 cited by the Times of Israel. As of June, the number of individuals held in Israeli jails under administrative detention — a practice that allows the holding of terrorism suspects without charges or trial — included 370 Palestinians and two foreigners, but not a single Israeli Jew, according to the Israeli human rights group B’Tselem.

While there are some indications that Israel is taking a harsher approach to Jewish terrorism following the Duma attack, it remains to be seen whether the crackdown lasts or whether it’s a passing response to public outrage that fades once the country’s attention moves on.

On Sunday, Israel’s security Cabinet approved the use of administrative detention for Jewish suspects. The following day, Interior Security Minister Gilad Erdan announced that the security Cabinet also had deemed any method of interrogation used with Palestinians to be used for Jews.

Israeli advocates for Palestinian rights, however, say harsh interrogations and administrative detention are deeply problematic methods that shouldn’t be used on anyone — Jewish or Arab — except in the most extreme cases as sanctioned by international law.

“Suddenly talking about using measures against settlers that are themselves a violation of due process is not the way to solve this,” said Sarit Michaeli, a B’Tselem spokeswoman. “You don’t add additional human rights violations.

“The problem isn’t lack of tools for law enforcement; it’s the lack of will to enforce the law against Israeli settlers,” she said. “There are plenty of legal tools that haven’t been applied, like proper police work and regular criminal prosecutions.”

After Abu Khdeir’s murder last year, three Jews were apprehended and confessed to the killing. But the case ushered in no major crackdown on Jewish extremists and was quickly overshadowed by the outbreak of war in Gaza.

On Monday, Israeli authorities arrested Meir Ettinger, a leading Jewish extremist and the grandson of the late Meir Kahane, whose anti-Arab political movement, Kach, was banned in 1994 and eventually designated as a terrorist group. Ettinger is suspected of “nationalist crimes” but not direct involvement in the West Bank firebombing, Israeli authorities said.

According Yesh Din, which investigates law enforcement in the West Bank, 85 percent of West Bank cases involving suspected Jewish crimes against Arabs are closed due to police failure to locate suspects or find sufficient evidence to indict. These include so-called “price tag” attacks in which Jewish extremists torch Palestinian olive trees, vandalize gravestones and mosques, and burn vehicles.

Critics say the Israeli soldiers stationed in the West Bank are under the impression that they are responsible only for protecting Jews, not Palestinians or their property.

“The soldiers refrain from exercising their powers to detain and arrest the individuals involved in the incident, secure the scene in order to enable the police to investigate and collect evidence and, at a later stage, provide testimony about the incident to the police,” Yesh Din said in a report in May.

For their part, figures associated with Israel’s extreme right are questioning the assumption by authorities that Jews were behind the attack in Duma. They are also complaining about what they say is outsized attention devoted to Jewish-perpetrated violence when the vast majority of violence in the West Bank is perpetrated by Arabs against Jews.

“If only a thousandth of what they’re doing against Jews they would do against the Arab terrorists,” Michael Ben-Ari, a former Knesset member from the National Union party and a self-identified follower of Kahane’s ideology, told Arutz Sheva, a right-wing news service.

Netanyahu sounded a similar note Tuesday when decrying the absence of international outcry over a firebombing attack on Monday night against a Jewish couple driving through an Arab neighborhood of Jerusalem.