Copenhagen’s main synagogue, where a guard was shot and killed Saturday (Wikimedia Commons)

(JTA) — From the window of the Jewish Community of Copenhagen’s crisis center, Finn Schwarz can see his country changing before his eyes.

Hours after the slaying of a guard outside the Danish capital’s main synagogue early Sunday morning, two police officers toting machine guns were on patrol outside the center — a common sight in France, Belgium and other trouble spots for Jews, but which resistant authorities in Denmark had previously considered both excessive and unpalatable.

“I think this attack was a wakeup call,” said Schwarz, a former community chairman who has lobbied the authorities for years, often in vain, for greater security. “What we have long feared happened and we will now see a changed Denmark. We have never seen this much security and guns before.”

The deployment of armed officers at Jewish institutions came within hours of a shooting at a Copenhagen cafe where a caricaturist who had lampooned Islam was speaking. One person was killed at the cafe in what Prime Minister Helle Thorning-Schmidt called a terrorist attack.

Later that night, Dan Uzan, a 37-year old volunteer security guard, was with two police officers at the Great Synagogue when a gunman opened fire with an automatic weapon, killing Uzan and wounding the officers. The trio were standing guard over approximately 80 people who had gathered for a bat-mitzvah celebration in a building behind the synagogue. Guests reportedly took shelter in the basement after the shooting and were later escorted out under heavy guard. 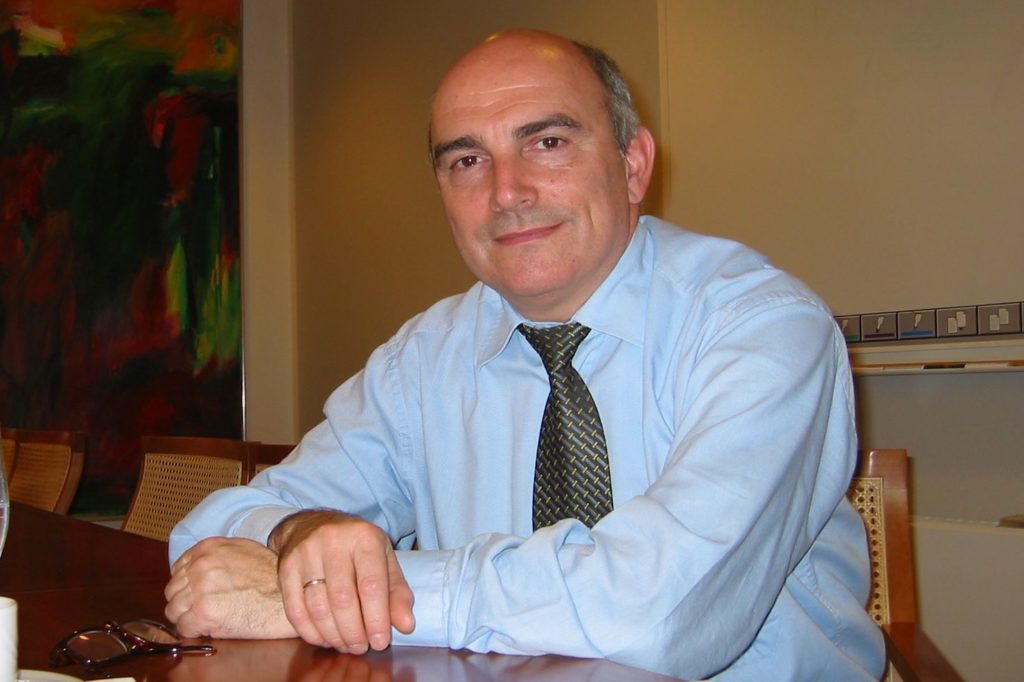 Former community chairman Finn Schwarz says there is a gap of tens of thousands of dollars between the security funding sought by Danish Jews and what the government is offering. (Ben Harris)

On Sunday morning, Danish police killed a 22-year-old man in a shootout who they said was a Muslim extremist responsible for both shootings. The shooter was later identified as Omar El-Hussein.

Through the day Sunday, heavily armed police officers remained deployed across the capital and beyond as authorities hunted for accomplices.

The attack comes amid an escalation in anti-Semitic incidents in Denmark, including one this summer in which several individuals broke into a Jewish school just weeks after the conclusion of Israel’s seven-week conflict with Hamas in Gaza. No one was hurt in that incident, but some weeks earlier Jewish educators had instructed pupils not to wear yarmulkes or other identifying garments to school.

Yet Danish authorities often resisted requests for greater security measures, an issue Rabbi Andrew Baker raised last September during a visit to Denmark in his capacity as the representative for combating anti-Semitism of the Organization for Security and Cooperation in Europe.

Noticing the absence of the sort of security arrangements familiar in Paris and Brussels, Baker asked Danish officials whether they were worried about an attack on Jewish institutions.

“The officials I met recognized the risks but said that Denmark had a ‘relaxed approach to security,’ as one interlocutor put it, and that having armed police in front of buildings would be too disturbing to the population at large,” said Baker, who also serves as director of international Jewish affairs for the American Jewish Committee.

“I was taken aback because I never encountered in other countries this argument of rejecting security measures while fully acknowledging the threat,” Baker told JTA. “I left knowing it was only a matter of time before I got the call.”

Schwarz said authorities had improved security around Jewish institutions after the slaying last month of four Jews at a kosher market near Paris. But currently, he said, there remains a gap of tens of thousands of dollars between the security funding sought by the community and what the government is offering.

“I think the heavy security is good, but I’m also sad to see it because a Denmark where armed officers stand outside [the] synagogue doesn’t seem like the peaceful country I know and love,” said Schwarz. “But it’s necessary.”

Denmark has approximately 8,000 Jews, according to the European Jewish Congress.

EJC officials stressed that the problem of Jewish security is not Denmark’s alone and called for continent-wide countermeasures, including legislation that provides national governments with improved tools to counter the threat.

“We are dealing with a pan-European problem which is being dealt with individually instead of on a pan-European basis,” said Arie Zuckerman, a senior EJC official who oversees the group’s Security and Crisis Centre. “This is part of the reason our enemies are the ones that have the initiative.”

“European governments and leaders who, in the name of upholding liberties, refrain from acting effectively against terrorists are endangering those very freedoms, because they are exposing them to the terrorists’ attacks,” Kantor said.

Back in Copenhagen, Ilan Raymond, a Jewish physician and father of two, spoke of an uncertain road ahead.

“What happened Sunday is a shock that will stay with us for a long time,” said Raymond, who learned of the attack while on vacation abroad when his 16-year-old son sent him a text message that read: “I am alright.”

The attack “will have a profound effect and may cause some leave,” Raymond said. “It’s early days.”