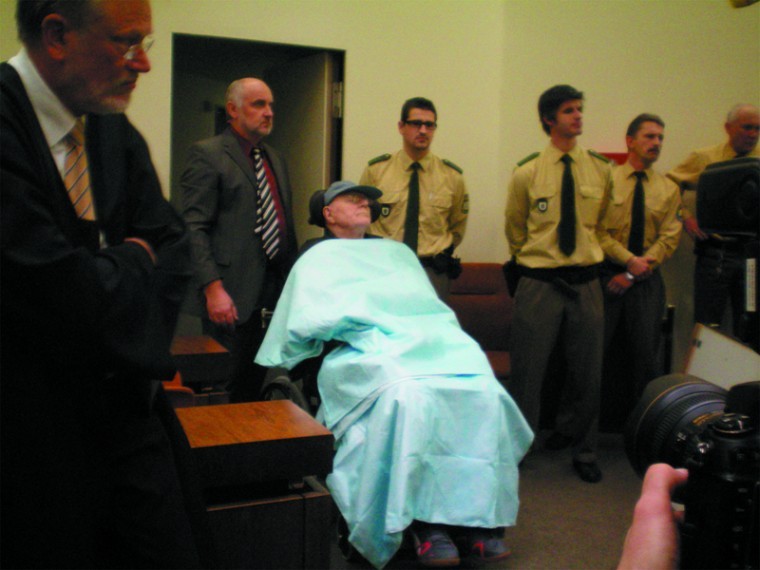 John Demjanjuk is wheeled into a Munich courtroom on Nov. 30, 2009 for the first day of his trial. The photo was taken by Sobibor death camp survivor Thomas Blatt.

Convicted Nazi war criminal John Demjanjuk has asked Germany to provide funds for his lawsuit against the online edition of the German tabloid newspaper Bild.

Demjanjuk wants some $33,000 to sue the news organization for its allegedly “derogatory and prejudiced” reporting on his trial, which ended last  May with his conviction as an accomplice in the murders of 28,060 in the Nazi death camp Sobibor during World War II.

According to the German news agency dpa, Demjanjuk, 91, is suing the tabloid over its use during the trial of such terms as “war criminal,” “beast of the concentration camp” and “Nazi henchman.” The implication is that Bild.de, the online version of Germany’s most widely read daily newspaper, influenced the outcome of the trial.

The German Press Council reportedly chastised Bild.de over its reporting on the trial, but according to the Demjanjuk complaint as reported by dpa, the tabloid continued to use “lurid” language and failed to uphold the principle of innocence until proven guilty.

Bild.de has maintained that its reporting was appropriate.

Demjanjuk, who is in an old-age home pending an appeal of his conviction and five-year jail sentence, reportedly has no financial resources. His recent attempts to regain U.S. citizenship have been rebuffed by a federal judge in Cleveland.