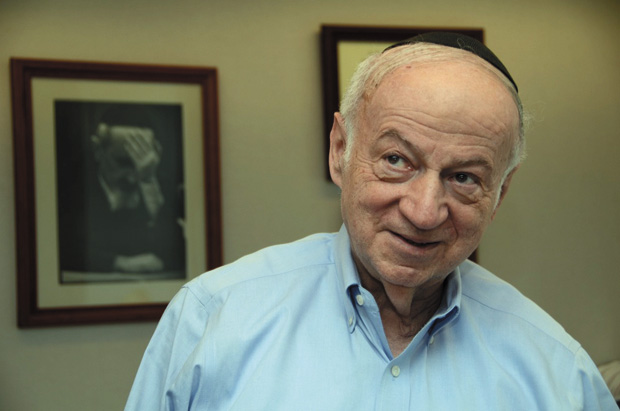 NEW YORK—More than three years after the discovery of fraudulent activity at the Conference on Jewish Material Claims Against Germany (“Claims Conference”), which continued for about a decade-and-a-half and deprived Holocaust survivors of more than $57 million, former Claims Conference Director of Hardship and Article 2 Funds Semen Domnitser and two co-conspirators were convicted last week on charges of mail fraud and conspiracy to commit mail fraud.

During the course of a prolonged investigation that began in 2009, 31 people—including 11 employees of the Claims Conference—were criminally charged and arrested in the conspiracy. Twenty-eight defendants pled guilty. The case against the three who had pled innocent — Domnitser, Oksanna Romalis, and Luba Kramish—had started April 8 at in New York City. Sentencing is set for Sept. 10.

The original indictment in this case said the defendants for more than a decade “knowingly approved nearly 5,000 fraudulent applications,” thereby diverting more than $57 million in funds that were intended for Holocaust survivors, in exchange for kickbacks. The Claims Conference, the designated administrator of reparations paid by the German government to Holocaust survivors, oversaw the funds in question.

“Outrageous,” Julius Berman, chairman of the board of the Claims Conference, has told JNS.org. “A fraud, no question… The arrangement with the German government is that they will pay [Holocaust reparations to] every individual who can prove presence in a qualifying situation… The qualifications were clear. Qualifications had to be met; the fraud was that there was phony evidence for the claims of eligibility.”

But that fraud—which Preet Bharara, U.S. Attorney for the Southern District of New York,  said had been going on since the German government began paying pensions to Holocaust survivors in 1994—was not revealed until 2009, following the Claims Conference’s appointment of Greg Schneider, a new executive vice president who replaced the departed Gideon Taylor.

Schneider had been a high-level Claims Conference employee since 1995, generally responsible for overseeing the claims process. Upon discovering the fraud—which involved doctoring birth certificates, passports and other documents needed to provide acceptable documentation for reparations claims—during a November 2009 internal investigation, Schneider and the Claims Conference brought the situation to the attention of the Federal Bureau of Investigation (FBI) and the U.S. Attorney’s Office. Among those now on trial is Domnitser—the former Claims Conference Director of Hardship and Article 2 Funds—who worked for the organization from 1993-2009, until he was terminated following the discovery of the fraud.

After the verdict on Wednesday, Berman said in a statement, “Those who perpetrated this unthinkable fraud enriched themselves by abusing the historic effort to obtain a small measure of justice for Holocaust victims.”

Martin Stern, an Israeli citizen born in England, whose mother escaped Germany during the Holocaust and whose wife’s family survived World War II in Scandinavia, told JNS.org that the Claims Conference has been lax in its surveillance of the reparations application process.

The indictment against the Claims Conference employees stated that during one month, one employee typically approved applications for Holocaust reparations in just a few days, whereas other caseworkers generally spent at least 60 days reviewing an application before approving it. Schneider has indicated his investigation and eventual discovery of the fraud was sparked by the realization that certain applications were processed with unusual speed, rather than the normal period of several months.

In December 1999, the U.S. and German governments agreed to a $5.2 billion settlement that Germany would pay to resolve all Holocaust-era slave and forced labor claims by survivors against German companies, and the Claims Conference has administered Germany’s reparations payments to the survivors. Attorney Sam Dubbin, who has worked on behalf of Holocaust survivors in Florida, said that the entire current system for compensating survivors is flawed and that there should have been “no individual settlement.”

“The Jewish community should have offered survivors three things: home care and assisted living insurance, Medicare supplement, and funeral insurance so survivors could live with dignity and not be a burden to their children,” Dubbin said.  He added,  “We made a mistake for all survivors by not going that way.”

Defendant Esfira Bas, who has admitted to processing 60 fraudulent reparations applications, became a witness for the U.S. government during the trial. Bas was not a Claims Conference employee and agreed to cooperate in hopes of receiving a lighter sentence, according to facts cited in court during her testimony.

“The recipients all knew they were not eligible,” Bas said in court. “Some were born after the war.”

Bas noted that advertisements promoting the program were placed in Russian-language newspapers. Bas said she collected documents, even from those she knew to be clearly ineligible for reparations, and passed them to a person named “Fainia.” For her part in the scam, Bas said she received $9,000.

Bas stated in court that she has provided all the information available to her to the FBI and other U.S. government agencies. She stated she “had no contact” with the applicants and acted “because they gave money back” to her. When asked if she considered how her part in perpetrating the fraud would affect Holocaust survivors, she responded, “I did not think about it.”