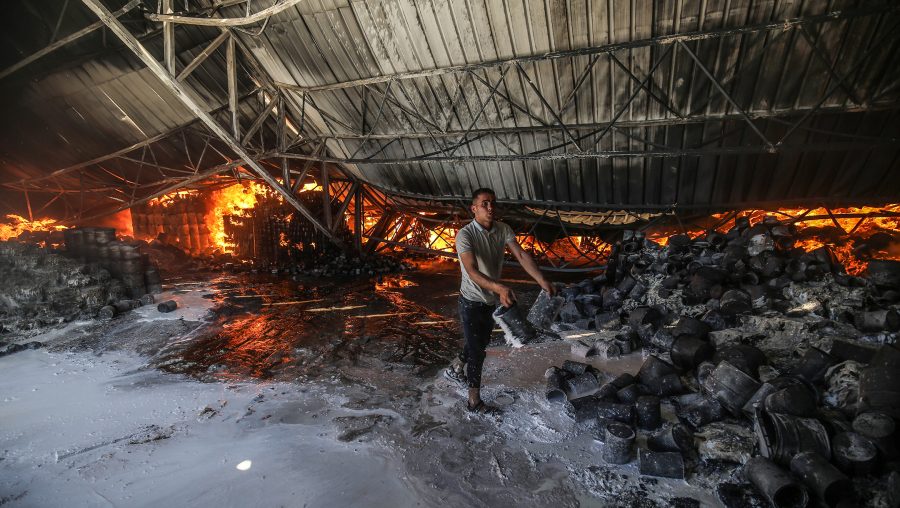 (JTA) — Gaza militants continued to fire rockets into Israel, which continued to respond with airstrikes on the coastal strip, as efforts toward a ceasefire progressed on the 10th day of the current round of fighting.

Twelve people in Israel have been killed in the fighting, including two children. In Gaza, the death toll is 219, including 63 children, according to Hamas, the militant group that controls Gaza. Israel maintains that many of Hamas’ rockets have fallen within Gaza, killing Palestinians there. Israeli forces have also killed 20 Palestinians in fighting in the West Bank.

The United States and other countries have been pushing for a ceasefire, and anonymous officials suggested on Tuesday that a truce could be reached in a matter of days. But on Wednesday, Israeli Prime Minister Benjamin Netanyahu said in a press briefing that Israel is “not standing with a stopwatch. We are taking care of the operation’s objectives.”

The United States and the European Union have continued to signal their desire for an end of hostilities, but both have reiterated their belief that Israel has a right to defend itself against Hamas, which both have condemned for targeting civilians.

Hamas and other militants were able to continue firing rockets at Israel on Tuesday and Wednesday morning, albeit at a diminished rate of about 50 rockets last night compared to hundreds each night last week. More than 3,000 rockets have been fired at Israel since May 9.

The Israel Defense Forces has been targeting Hamas commanders and its missile launch units, particularly launchers with multiple barrels that have the capacity of overwhelming Israel’s Iron Dome rocket interception system. It has intercepted most of the rockets fired on populated areas, IDF sources told Army Radio.

On Tuesday, many Israeli Arabs as well as Palestinians in the West Bank went on strike. In Israel, the strike shut down the Arabic-language school system and municipal services in Arab-majority cities, to protest what they called “attacks” on their community and the Al Aqsa mosque in Jerusalem.

Here’s the rest of the latest on Tuesday and Wednesday:

— Israel says that it has killed dozens of fighters for Hamas, Islamic Jihad and other factions in the fighting, including Bassam Ayisa, one of Hamas’ top five generals in Gaza. Islamic Jihad senior commanders have also been killed in the fighting, according to the Israeli publication Globes. In recent days, IDF strikes have focused on tunnels that Hamas uses to shuttle men and equipment along the border with Israel, destroying long stretches of that network, an IDF spokesperson told Israeli media.

— A 56-year-old Jewish Israeli man died in hospital as a result of injuries he sustained in an assault by Arabs protesters in Lod last week. Yigal Yehoshua was hit in the face with a brick by men who pulled him out of his car in the city’s center.

— The EU foreign policy chief, Josep Borrell, issued an informal call to end the violence after Hungary, a close ally and supporter of Israel, thwarted the passing of a similar text as an official EU foreign policy document agreed upon by all member states. The text spoke of a “high number of civilian casualties” and a “high number of children and women” killed. “We condemn the rocket attacks by Hamas and other terrorist groups on the Israeli territory, and we fully support Israel’s right to defense,” Borrell also said.

— Many thousands of Arab workers across Israel, as well as Palestinians, heeded a call for a general strike issued by several Arab-Israeli organizations and leaders, who cited “attacks on our communities by extremists and settlers” and “the attack on Sheikh Jarrah and the al Aqsa mosque.”

The current conflagration began amid tensions over the eviction of Palestinians from homes in the eastern Jerusalem neighborhood of Sheikh Jarrah. Cellcom, a major cellphone and communications provider, saw tens of thousands of subscribers leave after they declared a one-hour “protest strike”  on Tuesday to “promote coexistence” and to “not let extremists win.” A company spokesperson later said the move’s timing had been “wrong” and that the firm did not mean to associate itself with the strike in the Arab sector.

— Clashes in the West Bank escalated. Three Palestinians were killed there Tuesday during rioting against Israeli troops, according to the Ma’an Palestinian news agency. Two soldiers were lightly wounded, Ynet reported.

— The escalation in Israel is triggering an increase in antisemitic incidents in Europe and especially in the United Kingdom. On Tuesday, Robert Jenrick, the communities secretary of the UK government, said that an assault Sunday on a rabbi near London was among the incidents. The rabbi, Rafi Goodwin, sustained moderate injuries in a beating outside his synagogue on May 16. That day, multiple cars displaying Palestinian flags drove through Golders Green, a heavily Jewish part of London. A participant in the convoy shouted through a loudspeaker: “F–- the Jews, rape their daughters” among other chants.