(JTA) — Dana Nessel has spent much of her career challenging the state and federal government to advance progressive causes. In 2015, the Jewish attorney successfully argued in a case to overturn Michigan’s ban on same-sex marriage.

The lawsuit, in which Nessel represented a lesbian couple looking to jointly adopt their foster children, was later combined with others in that year’s landmark Supreme Court case Obergefell v. Hodges, which legalized same-sex marriage.

But after the 2016 presidential election, Nessel, 49, decided she wanted to go about things in a different way. As she saw “egregious policies” at the federal and state level, she decided to run for office.

“It was never my plan, but after the Trump election, quite honestly, I changed my mind,” she said.

But where to run?

Nessel, a Democrat, is the first openly LGBTQ person elected to statewide office in Michigan. She also appears to be the first Jew serving in her current role.

The first few months in office have been “fantastic,” she said, and “a little overwhelming.”

“We have had 16 years of Republicans in the office of the attorney general,” Nessel said. “My predecessors had quite a different view and vision for the office, and a different approach to handling cases than I do, so I have inherited the work of my predecessors.”

Nessel is passionate about what she calls defending immigrants from federal overreach, an issue that she links to her family history.

“I’m the granddaughter of immigrants who fled World War II and fled the Holocaust and who were penniless and spoke no English and had no marketable skills,” she said, “but they were allowed to come to this country, and just a few generations later their granddaughter is the top lawyer in a state of 10 million people.”

On Monday, Nessel said that Michigan had joined a lawsuit against President Donald Trump’s emergency declaration to build a wall on the border with Mexico.

Nessel also has established a hate crimes division in the attorney general’s office. She said its goal is “to fight against hate crimes and the many, many hate organizations that exist in our state now and that have proliferated under frankly, I think, the auspices of the Trump administration.”

She has also withdrawn Michigan from a range of conservative lawsuits on issues such as reproductive rights, gender discrimination, and separation of church and state. 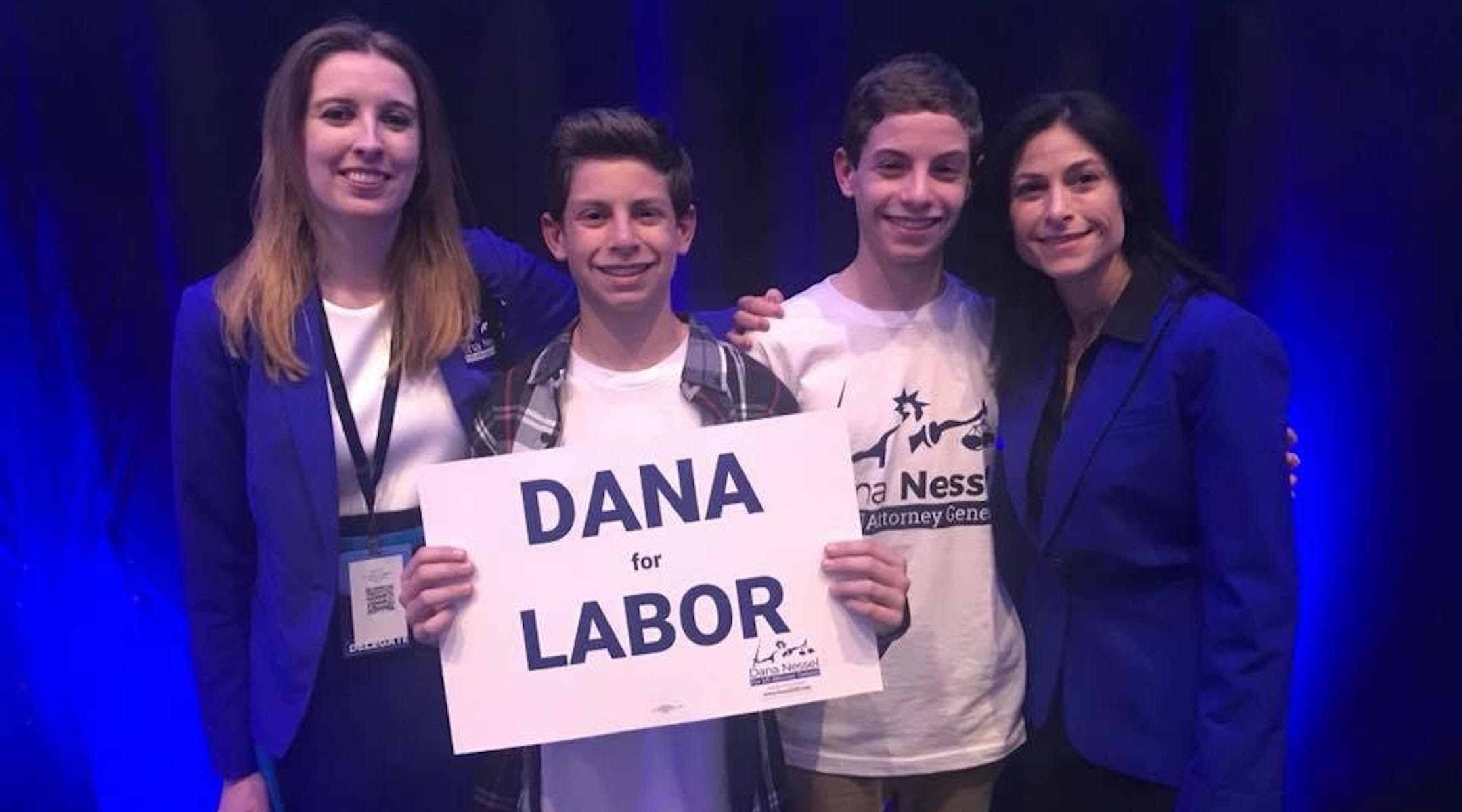 Dana Nessel, right, with her wife, Alanna Maguire, and their sons, Alex and Zach. (Courtesy of Nessel)

Nessel feels that she can still support the values she championed as an activist.

“I’m not an activist anymore, but I feel like I can still bring those values that I’ve been fighting for for so long to the office of Michigan’s attorney general,” she said.

Nessel, who grew up attending the Reform congregation Temple Kol Ami in West Bloomfield Township, in the Detroit metropolitan area, traces many of her values back to Judaism.

“The values that we learned at my temple had a lot to do with empathy and compassion for all people, caring about people who were different and who had been ostracized in society in a lot of ways, much in the way that the Jewish community historically has,” she said.

During her campaign, Nessel gained wide media coverage for an ad in which she said voters should trust her to take sexual harassment seriously.

“When you’re choosing Michigan’s next attorney general, ask yourself this: Who can you trust most not to show you their penis in a professional setting?” she asked in the ad. “Is it the candidate who doesn’t have a penis? I’d say so.”

Nessel said that she had not expected the ad to go viral.

“The way in which I did that attracted more attention than I expected, but it was good because the message got out,” she said.

In her free time, Nessel enjoys spending time with her wife, Alanna Maguire, and their twin 15-year-old sons, as well as fostering animals (the family  has three cats).

Though Maguire isn’t Jewish, Nessel says that she has taken a liking to the culture and the cuisine in particular.

“There is not a single Jewish meal that she can’t prepare as well as if she had been raised Jewish,” Nessel said. “I would put her matzah ball soup up against anybody else’s, and her kugel, too.”

Looking back at her career, Nessel said that being part of the case that helped legalize same-sex marriage stood out, both from a professional and personal perspective.

“I got married, and my wife adopted our kids,” she said. “My kids now have two legal parents, and they had gone their entire lives without that. It is pretty impactful to our state, to our country and to me personally. I don’t know that I will ever be involved in anything quite of that magnitude again.”