Cristina Fernandez de Kirchner is making a political comeback in Argentina, and the Jews there are split

(JTA) — Argentines head to the polls for the final round of presidential elections on Oct. 27. The two candidates are the incumbent, Mauricio Macri — the first conservative elected in the South American nation in several decades — and Alberto Fernandez, a Peronist, or left-wing populist.

Things are not looking good for Macri — in the first round of voting, Fernandez won 47 percent to Macri’s 32 percent.

Kirchner led Argentina from 2007 to 2015, but was defeated in the wake of a wave of corruption charges. She was indicted last year on charges that she accepted bribes from construction companies, and investigations into her cases are ongoing.

Kirchner also is accused of obstructing the investigation into the 1994 bombing of the AMIA Jewish center in Buenos Aires, allegedly carried out by Hezbollah terrorists funded by Iran, which killed 85 and injured hundreds.

As a congresswoman in 1999, Kirchner led a new commission to clarify and investigate the case, but during her second term as president — with Hector Timerman, a Jewish-Argentine journalist as her secretary of international affairs — she signed a controversial memorandum with Iran that allowed the accused culprits to be judged within their country. To some, this was a sign that Argentina was criminally complicit with Iran. To others, it was seen as the legal means to bring the case to international grounds.

The matter was complicated further when the Jewish attorney investigating the case, Alberto Nisman, was found dead in his apartment in 2015, one day before he was set to present his findings. Whether his death was a murder or suicide is a matter that still splits Argentine public opinion along ideological lines. (An official Argentine report has determined it was murder.)

It all might seem like grounds to turn most of Argentina’s Jewish community against Kirchner — but its views on the ex-president aren’t that simple. 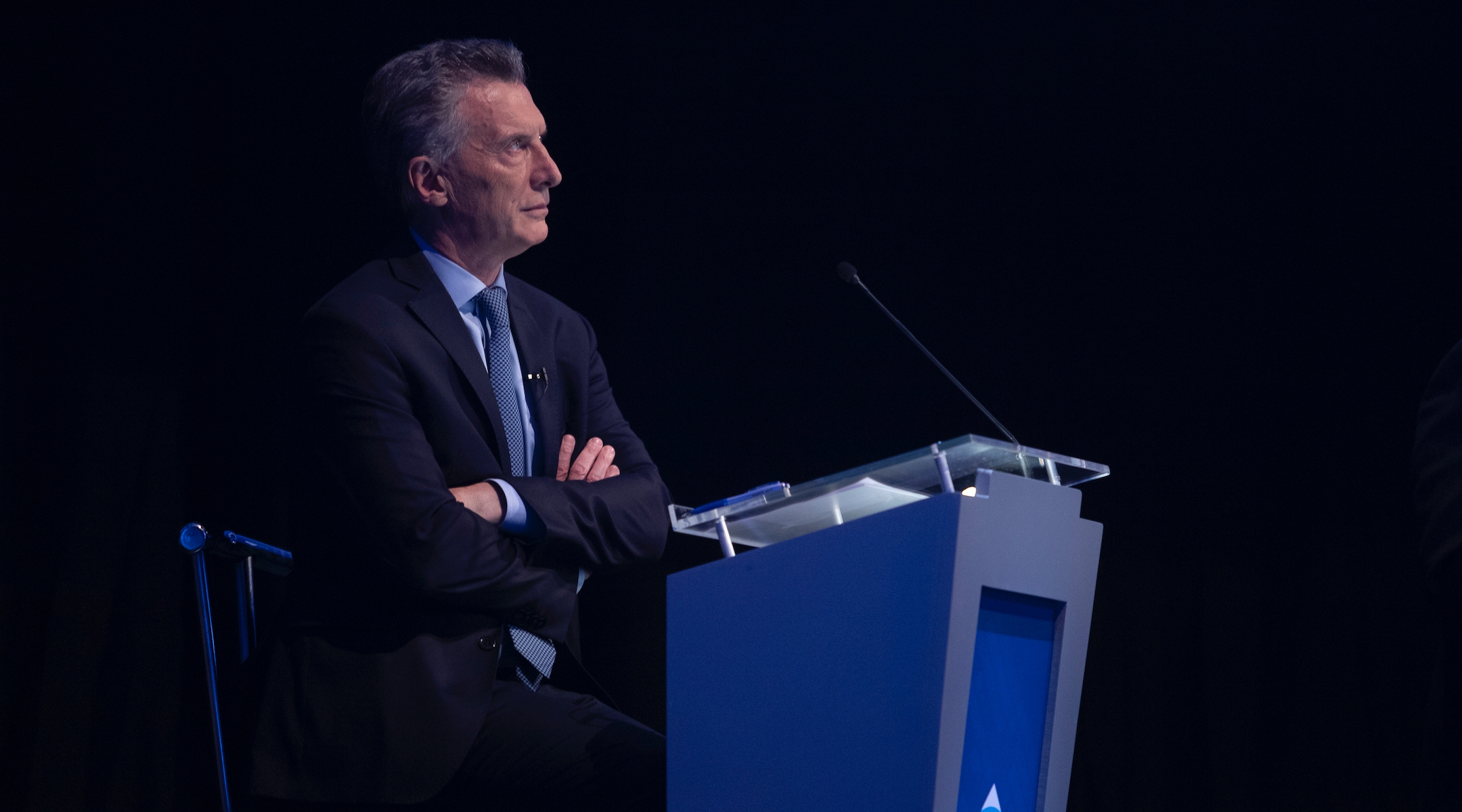 Mauricio Macri is shown during the first presidential debate in Santa Fe, Argentina, Oct. 13, 2019. The incumbent is trailing in the polls. (Matias Baglietto/NurPhoto via Getty Images)

The division between peronistas and anti-peronistas is deep within Argentine society and is referred to in common slang as “la brecha,” or “the gap.” According to experts, la brecha runs through the Argentine Jewish community as well, tainting perceptions both of the ongoing AMIA case and the country’s relationship with Jewish institutions and Israel.

“Argentina is not like the United States, where a majority of the Jewish community votes for one party,” said Ariel Krengel, head of the Federación Argentina de Centros Comunitarios Macabeos, or FACCMA, a consortium of more than 40 Jewish sports institutions and cultural centers. “So there can be no such thing as a Jewish vote.”

With approximately 200,000 Jews descending mostly from Eastern European countries, Argentina’s Jewish community is the largest in Latin America. Unlike smaller communities in countries such as Mexico and Colombia — where a large part of the population is middle-upper class and skews conservative — Argentina’s Jews are highly assimilated and mostly middle class. Like most of the rest of this middle class, they have seen their pockets affected harshly by their country’s ailing economy.

Macri originally ran on a campaign to alleviate poverty and kickstart Argentina’s economy. But his term has been characterized by sharp inflation and a devaluation of the peso. As a result of the crisis, he withdrew an unprecedented $57 billion from the International Monetary Fund last year. For many, he has failed: Last year, 3.7 million Argentines dropped beneath the poverty line — over 35 percent of the country’s population now qualifies as poor.

“I’ve heard of many Jewish social-help organizations, like Tzedaka, who are having to help with extreme poverty cases,” said Leonardo Shvarstein, an economics professor at Buenos Aires Autonomous University. “I think that, like the rest of the country, the Jewish community is experiencing tough times.”

But Macri has pressed hard to advance the AMIA investigation, and in 2016 he met with Nisman’s family on the anniversary of his death. This year, Macri also became the first Argentine president to host an Israeli prime minister in the country. He has opened the Argentine market to Israeli startups and promoted stronger collaboration between the nations.

Macri is additionally perceived publicly to be closer to the Jewish institutionalized community. He recently hosted an event commemorating the 25th anniversary of the AMIA bombing in the presidential house. It was a highly covered event, and the leaders of the DAIA and AMIA organizations — the main representatives of the Jewish community in Argentina — shared a stage with the president.

Jews who had leadership positions within communal institutions are also currently involved in Macri’s government. Rabbi Sergio Bergman, a fierce critic of the Iran memorandum, is the environmental minister, and a former executive director of DAIA, Claudio Avruj, is sub-secretary of human rights and cultural pluralism.

“In terms of a relationship to Israel,” said Gabriela Goldberg, who worked at the Israeli Embassy in Argentina during Kirchner’s second term, “Cristina follows a ’70s leftist, global south ideology, which is not necessarily conductive to a close relationship with [Israel]. But then again, [Alberto] Fernandez is not Cristina, it might not be the same.”

But Jews are also strongly present in Kirchner circles — mostly from secular and unaffiliated backgrounds, sociologist and journalist Jorge Elbaum told the Jewish Telegraphic Agency. Among them is Axel Kiciloff, who was economic secretary during Kirchner’s presidency and will probably be elected mayor of Buenos Aires. 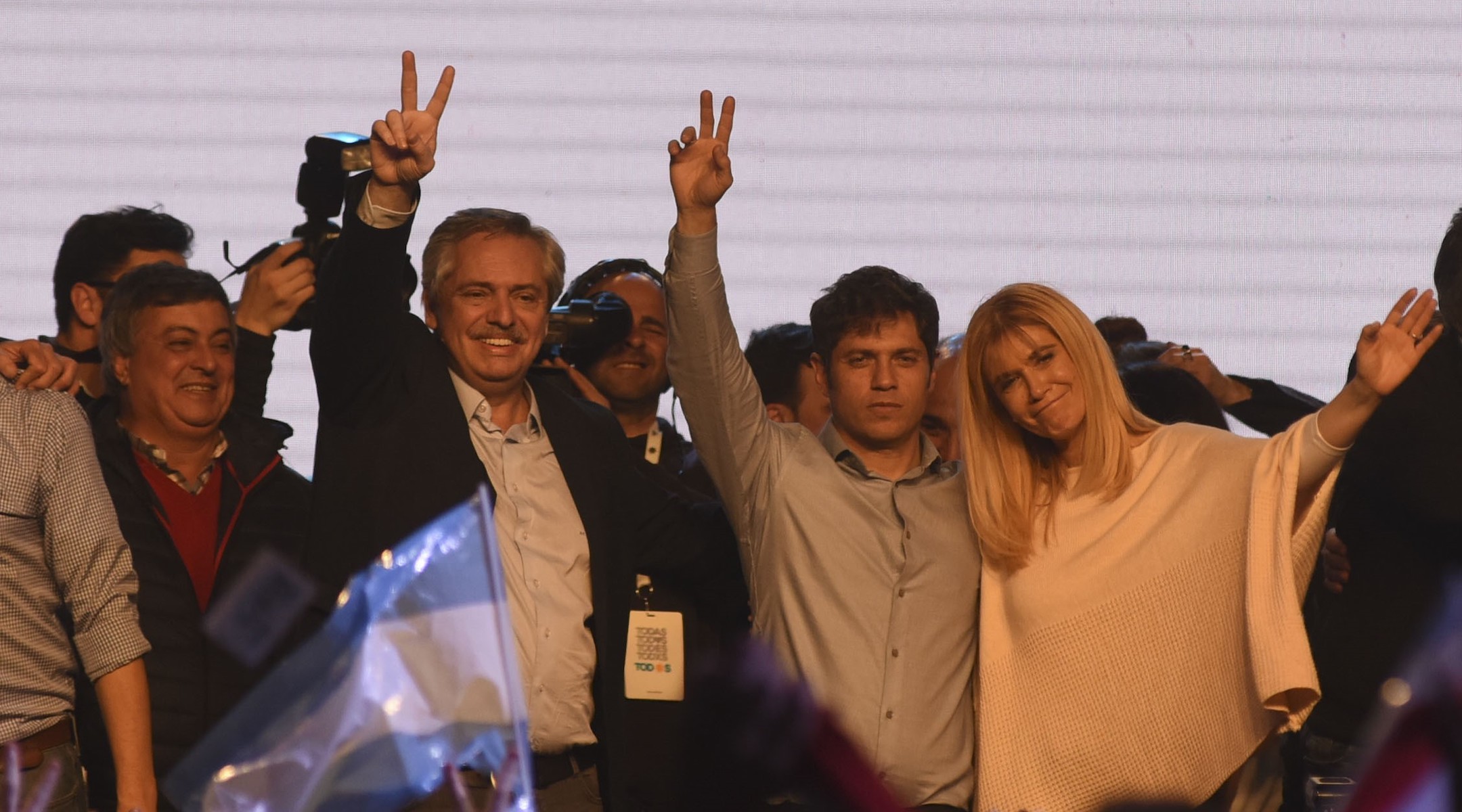 “Considering that we are less than 0.7 percent of the population, Jews in the Macri and the Kirchner governments are both overrepresented,” said Elbaum, who is also founder of Llamamiento Judío (Jewish Calling), a progressive Jewish movement with 7,000 members that is ideologically close to Peronism and Kirchnerism.

All of those interviewed agreed that Jewish or Israeli-centered themes, both inside and outside the community, were of secondary concern for Jewish and non-Jewish voters, and those issues did not feature prominently in either candidate’s campaigns.

That might be because despite the fact that the two largest attacks ever on Jewish institutions in Latin America happened in Argentina (two years before the AMIA attack, 20 people died and more than 200 were injured in an attack on the Israeli Embassy), Jews today feel safe there.

“Fortunately, daily anti-Semitism is not an issue in Argentina right now,” Krengel said. “Pointing out whether someone is a Jew is seen by most of the population as something denigrating. Argentinian Jews will vote as Argentinians, above all.”