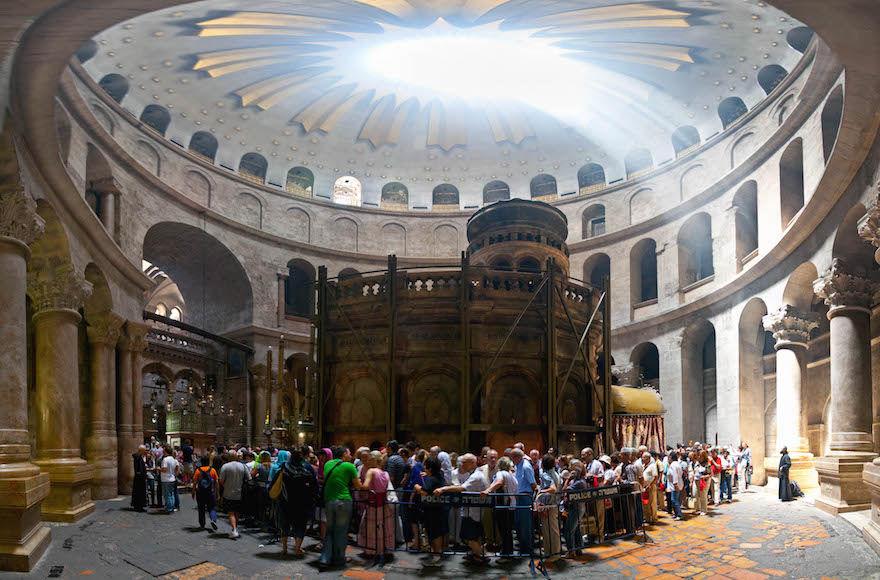 Visitors line up at the Tomb of Christ at the Church of the Holy Sepulchre in Jerusalem, June 23, 2010. (Michael Privorotsky/Flickr)

JTA
JERUSALEM (JTA) — The Church of the Holy Sepulchre in Jerusalem locked its doors and closed until further notice to protest a new municipal tax policy and a bill that would allow the Israeli government to confiscate some church land in exchange for compensation.

“We, the heads of Churches in charge of the Holy Sepulchre and the Status Quo governing the various Christian Holy Sites in Jerusalem […] are following with great concern the systematic campaign against the Churches and the Christian community in the Holy Land, in flagrant violation of the existing Status Quo,” read a statement from the heads of the churches in Israel:  Greek Orthodox Patriarch Theophilos III, Custos Francesco Patton and Armenian Patriarch Nourhan Manougian, Haaretz reported.

“This systematic and offensive campaign has reached and unprecedented level as the Jerusalem municipality issued scandalous collection notices and orders of seizure of Church assets, properties and bank accounts for alleged debts of punitive municipal taxes.”

The statement compared the decisions to “the laws of a similar nature which were enacted against the Jews during dark periods in Europe.”

The church, where Jesus is believed to have been crucified, buried and resurrected, is one of Christianity’s holiest sites.

Following the closing of the church, a Knesset committee on Sunday postponed discussion of the church lands bill, which would halt most of the major land sales in tony neighborhoods of Jerusalem carried out by the churches to private real estate companies.

Meanwhile, the Jerusalem municipality said it would collect about $186 million in what it said are back taxes owed by churches and international bodies with property in the city, according to Haaretz.