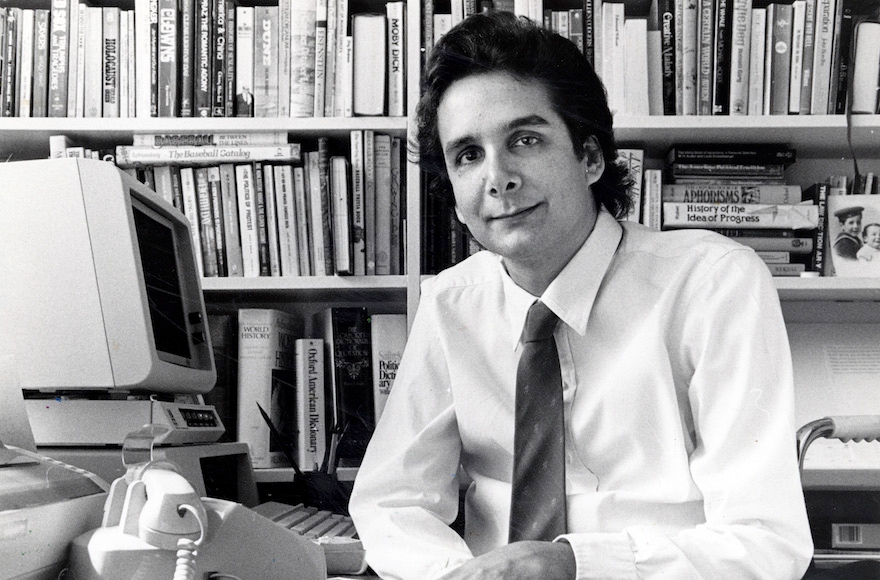 (JTA) — On June 10, 2002, Charles Krauthammer delivered the Distinguished Rennert Lecture upon receiving the Guardian of Zion Award from Bar-Ilan University’s Ingeborg Rennert Center for Jerusalem Studies. Below is an excerpt from the lecture titled “He Tarries: Jewish Messianism and the Oslo Peace.”

In the 1990’s, America slept and Israel dreamed.

Like the left and like the reverie that we had in the United States, secular Messianism was intoxicated with the idea that history had changed from a history based on military and political conflict to one in which the ground rules were set by markets and technology. This was the infatuation with globalization as the great leveler and the abolisher of things like politics, war, and international conflict. This kind of geo-economics was widely accepted in the early post-Cold War era.

It was Sept. 11th that abolished that illusion. It taught us in America there are enemies, they are ideological, they care nothing for economics, and they will use whatever military power they have as a means to achieve their ideological ends. This is the old history, perhaps the oldest history of all, the war of one god against another. No new history, no break in history, no redemption from history.

The other source of this secular Messianism in the Israeli context was the success of the European Union, which was seen as a model for peace in the Middle East. There was talk of Israel, Palestinian, and Jordan becoming a new Benelux, with common markets, open borders, friendship, and harmony.

Indeed, if you look at the Oslo accords, of course there is page upon page of all of these ideas of cooperation on economics, on technology, on environment, all which in retrospect appear absurd. And indeed, this entire idea of the Benelux on the Jordan looks insane in retrospect, but I believe that it was insane from the very beginning, when it was first proposed ten years ago.

There are such obvious differences between the European situation and the Middle Eastern one. First is that the period of harmony, integration, and commodity among the Europeans happened only after the utter and total defeat of one party. It did not come from long negotiations between France and Germany at Camp David, compromising their differences over the 20th century. It came from the utter destruction of Germany and the rebuilding of a new Europe after that surrender and accommodation.

These conditions do not apply in the Middle East. The only way that that kind of peace will come definitely is the peace not of the brave but of the grave, and that means a peace that would be established with the defeat of Israel and its eradication. There is no way that Israel can utterly defeat the Arabs the way the allies defeated Germany and Japan in the Second World War. So that the idea of some kind of harmonious Middle Eastern Union drawing on the European mantle is drawn from a totally false historical analogy, one that is based on surrender and accommodation that could not happen in this Middle Eastern context, unless we are looking at the world through the eyes of Hamas and Hezbollah.

Secondly, the Middle East is still a collagen of religious fanaticism, economic backwards, and political tyranny. It is nothing more than a mirage to transpose the situation in Europe with the harmony that came after half a millennium of conflict and in conditions of modernity to transpose those conditions to the Middle East, with a conflict as much younger and the political culture infinitely less mature. In this context, to look at the savage religious and secular conflicts going on throughout the Middle East and to believe that the most virulent of these, the conflict with Israel, can find the kind of harmonious coexistence that exists in Europe, can only be called Messianic.

Now, this is not to say that the only impulse underlying Oslo was Messianic. There was a Messianic left and there was a realistic left, if you like. The realists saw Oslo as a pragmatic way out of Israel dilemma. I believe in retrospect, as I believed at the time, that they were utterly mistaken, but at least they were not dreaming.

I think Rabin had a fairly coherent logic behind Oslo. He saw three basic changes in the world having occurred in the ’90s, and he thought they would give Israel an opportunity to quickly settle the Palestinian dispute and to concentrate on the larger disputes coming in the longer run from periphery, from the missiles and the weapons of mass destruction that would soon be in the hands of Iran, Iraq, Libya and others.

And the three events he saw were: First, the collapse of the Soviet Union, which deprived the rejectionist Arabs of the great superpower sponsor and source of economic, military, and diplomatic assistance. Second, was the victory of the United States in the Gulf War and the establishment of American hegemony in the region. Third, was the terminal condition of the PLO. Arafat had again, as always, chosen the wrong side in war, was cut off by Kuwait and Saudi Arabia, ostracized by the United States, lost all of his financial and diplomatic support. The PLO was on its last legs.

Rabin thought he was cleverly exploiting the weakness of the PLO by reviving it, he imagined, just enough so it could make peace with him. With the Soviets gone, with Iraq defeated, with the US ascended, with the PLO weakened, he thought he could make a deal on this basis. He turned out to be hopelessly mistaken, both on the intentions and on the recuperative powers of the PLO once Israel had helped it out of its abyss.

It was one of the great miscalculations in diplomatic history.

Indeed, I believe Oslo will stand as perhaps the most catastrophic, self-inflicted wound by any state in modern history.

But at least in Rabin’s mind, as I understood it, it was a calculation. For Peres and his counterpart on the Israeli left, it was a leap of faith. And I mean the word literally, faith.

Chesterton once said that when a man stops believing in God he doesn’t believe in nothing, he believes in anything. In the ideologically fevered 20th century, this belief in anything often turned out to be a belief in history, history with a capital H. For the messianic left, Oslo was more than a deal. It was a realization, a ratification of a new era in history.

Israel, labored under its illusion, did not awake to its reality for seven long years, until reality declared itself in the summer of 2000 at Camp David, when Barak’s astonishingly conciliatory peace offer elicited a Palestinian counter offer of terrorism and suicide bombing.

Again, that is not impossible. That is what Sadat offered, and he meant it. It is not clear that post-Sadat Egypt means it, although it has lived within the Sadatian parameters at least for reasons of prudence ever since.

But there has never been a Sadat among the Palestinians. And the idea that one can strike a real peace deal with Arafat, in the absence of a Sadat-like acceptance of the Jewish state, is indeed delusional. Until there is a genuine Arab, a genuine Palestinian acceptance of a Jewish state within whatever borders, there will be no end to history, there will only be more and more history.

Bismarck once said of the Balkans that they produce more history than they can consume, and that will be the fate of the Middle East for the foreseeable future.

Let me conclude by dealing with one objection to my characterization of the secular Messianism of the Israeli, and I might say American, left. One might ask, “Was not the original Zionist dream itself Messianic?” After all, a hundred years ago Zionism itself appeared to be a crazy dream. The idea of the ingathering of the exiles, the reestablishment of the Hebrew language, of Hebrew culture, the settling of the land, the achievement of political independence, appeared all to be, well, Messianic.

I would argue precisely the opposite. Zionism is the antithesis of Messianism. Zionism argued against waiting in the Diaspora with prayer and fervency for some Deus Ex Machina to come and to rescue the Jews. Zionism rejected the idea of waiting for an outside agent, for a Shabtai Zvi and a Bar Kochba. Zionism is supremely an ideology of self-reliance, of self-realization. It refuses to depend on others, it postulates no sudden change in the psychology of enemies, it postulates no change in human nature, it postulates no discontinuity in history.

Zionism accepted the world precisely as it was, and decided that precisely because the world was as it was, the Jews had no future in the Diaspora and would have to build their future in Zion. Most of all, they understood that the building of Zion would depend on Jewish action, Jewish initiative,

Jewish courage. They had to go out and to build a state themselves, and they did.

Oslo, on the other hand, a supreme expression of post-Zionist Messianism, was entirely contrary to that spirit. Why? Because of its passivity, its reliance on an almost quasi-religious change of heart among Israel’s enemies. It is an acceptance of Israel by people who daily in their propaganda, in their sermons, in their pedagogies, anatomize the very idea of the Jewish State. It expected a renunciation of terrorism by people who practice, support, and fund and glorify it, and who had been doing that for 20 years, 30 years. It believed in entrusting the security, the safety, perhaps even the very existence of the Jewish state into the hands of sworn enemies.

We have now learned, to our sadness and horror, that one cannot contract out the safety of the Zionist experiment to others, most especially to Arafat and the PLO. That was the premise of Oslo and it has proven to be catastrophic.

I repeat, in the 1990’s America slept, and Israel dreamt.

The only good news is that Israel has awoken from that reverie, the most disastrous Messianic seduction since Shabtai Zvi. Shabatianism survived nonetheless for centuries; Osloism still has its cultic adherence. But the body of the Jewish people have awoken, let us hope not too late, and once and for all determined never again to succumb to the Messianic temptation.

(Charles Krauthammer wrote a  weekly political column for The Washington Post, was a Fox News commentator and appeared regularly on “Special Report with Bret Baier.” He died Thursday.)