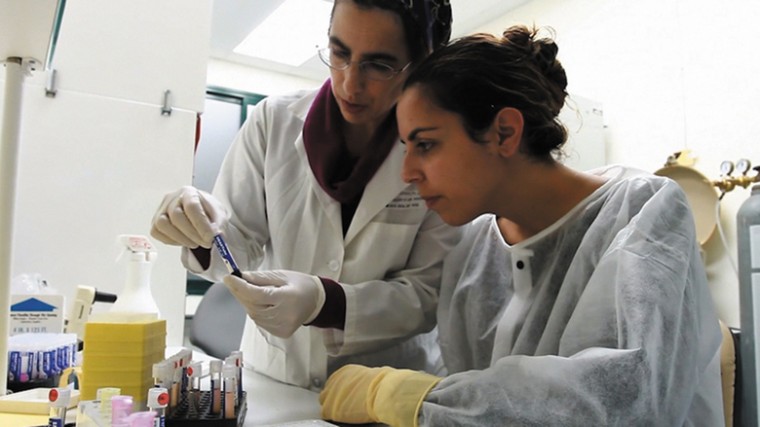 A scene from “Israel Inside,” a new film that encourages viewers to see the country through the lens of creativity, not conflict.

Rabbi Raphael Shore, the producer of “Israel Inside: How A Small Nation Makes a Big Difference,” denies that his film ignores Israel’s conflicts or encourages viewers to do so.

The media does a good enough job of detailing the Israeli-Palestinian conflict, secular and religious Jewish divisions, and tension with Iran, Shore says. Instead, why not focus on what’s miraculous about Israel?

“What we wanted to express in this film is really what is experienced,” Shore, a native of Ontario, Canada says. “The media has become fixated on the conflict. We feel that it’s so important to change the camera angle on the conflict.”

Narrated by Tal Ben-Shahar, the positive psychology professor who left his teaching position at Harvard after 14 years in the U.S. to return to Israel and be with his family, the film analyzes Israelis via Ben-Shahar’s criteria for happiness and success. According to the film, Israel’s “actualizers,” those factors that helped and continue to help the country reach its full potential, are: family, resilience, chutzpah, education and tikkun olam (repairing the world).

Ben-Shahar serves as the academic chair of JerusalemOnlineU.com, Shore’s Israel education and advocacy group that is behind the film.

The film spotlights Israel’s history of taking a dry desert and transforming it into a technologically savvy country that developed an ingenious water system to survive and exported drip-irrigation to other water-deprived countries around the world. The film focuses on universal values like diversity, volunteerism in Israel and beyond its borders, and the country’s blossoming non-profit and business sectors to paint a picture of a thriving, modern and concerned society.

Israel is never done growing, Ben-Shahar says: “A self-actualized person is a person who is always looking to learn and grow; the same applies to a nation.”

“We wanted to pick the positive, uplifting experience that most people have here,” says Shore. “It’s not a panacea, it’s not peace on earth yet, but let’s take a deeper look at what’s going on here.”

As such, the film makes no mention of Arabs, strife, religion or Judea and Samaria.

“The conflict is not going away, it’s going be there,” Shore says. “We’re not suggesting that you ignore it. We’re trying to broaden the discussion to include a much larger picture about the nature of the Israeli society and the Israeli people and the Jewish people and the contribution we’re making. All that needs to be put into the proper context to understand the Middle East.”

Ben-Shahar, who says he was intimately involved in creating the film which “captures what I want people to know about Israel,” aimed for it to start balancing the highly distorted playing field of Israel coverage.

“Do we hear any criticism of the sort Israel advocates receive?” he asks. “If a positive film was made about France or Saudi Arabia or Australia, would anyone object?”

In honor of Israel’s 64th birthday this year, about 100 communities are screening Israel Inside during April and May, including events at synagogues, day schools, 50 college campuses, and with Christian groups and Jewish organizations. The film has also appeared on half a dozen PBS stations, with half a dozen more airings planned. The film is being screened April 26 in Springfield, Ill. and April 25 in Columbia, Mo. No St. Louis screenings were listed on the film’s website.

In its educational materials for young people, Shore’s JerusalemOnlineU, which is behind the film, aims to foster Jewish pride and pride in Israel, without which the Jewish people are in a “straight line to assimilation,” Shore says. The producer says he is thrilled with the diversity of Jewish organizational support for his film.

have been treated to the film on every flight, Shore says, and the non-profit is also using the film in its “Step Up For Israel” youth advocacy program and other educational projects for all ages, including a new curriculum on Israel’s actualizers for Jewish summer camps in the U.S.

Shore, who lives in Jerusalem, also makes films about radical Islam through his Clarion Fund non-profit, among them Iranium, The Third Jihad: Radical Islam’s Vision For America and Obsession. Earlier this year, Muslim leaders spoke out against The Third Jihad and claimed the film misrepresented their faith after the New York Police Department began showing the documentary to police officers as part of their training.

The filmmaker dismisses criticism of The Third Jihad and the other Islam-themed films as “libelous.” The films, he says, begin and end with “the very strong, clear message that the films are not about Islam.”

“They’re not about the majority of Muslims,” Shore says. “They’re about the small minority of Muslims that are dedicated to terrorism and to the victory of Islam, this conquering of the world on behalf of Islam through any means at their disposal, including terror.”

That isn’t Shore’s only complaint about media outlets, which he says tend to paint the Palestinians as the David and Israel as the Goliath.

“The much fairer camera angle is to look at the conflict of Israel against the entire Middle East, so much of which is working against Israel,” he says. “Unless you put that into proper perspective—that Israel has this incredibly large array of various, different enemies bent on its destruction all over the region—you can’t really understand.”

Israel Inside depicts a “start-up nation” that Shore hopes will inspire other products, programs and communication methods on behalf of the Jewish people. With the film’s success, he hopes the message will make a dent in the media bias against Israel, half of which he says is sourced in misinformation and can be corrected with accurate information.

Shore also hopes to impact the lives of those he cares about most. “The mothers and fathers in their living rooms at Pesach Seders,” he says, “will talk about Israel in a more exciting, deeper way.”