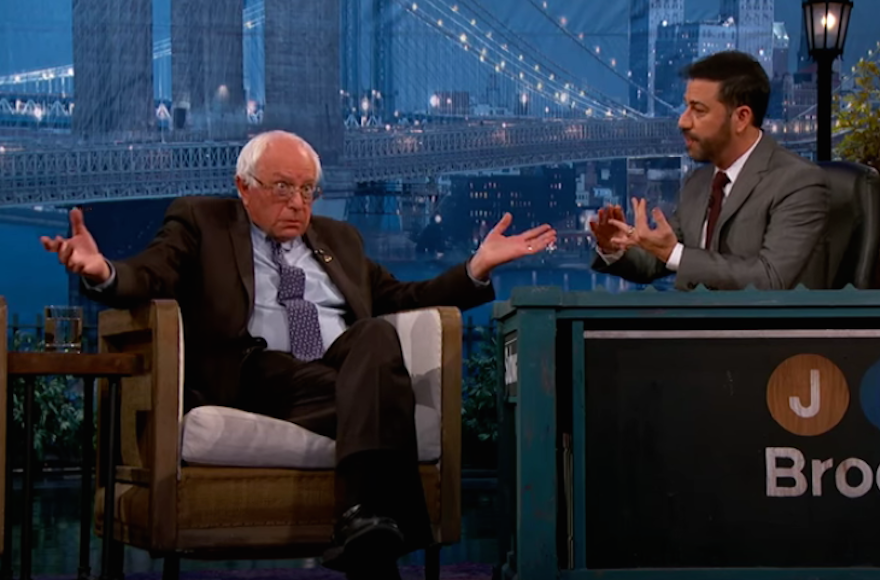 After Larry David impersonated Bernie Sanders to perfection last weekend on “Saturday Night Live,” it was only a matter of time before the Jewish presidential candidate responded to the Jewish comedian’s lauded performance.

Sanders went on “Jimmy Kimmel Live!” Wednesday to address the “SNL” skit and wound up talking about some topics that don’t usually make it into his stump speeches, from marijuana legalization to his chances of actually being elected.

When Sanders said “God forbid” while talking about a potential Republican White House, Kimmel jumped on the mention and said, “You say you’re culturally Jewish, but you don’t feel religious. Do you believe in God, and do you think that’s important to the people of the United States?”

“I am who I am, and what I believe in and what my spirituality is about is that we’re all in this together. That I think it is not a good thing to believe as human beings we can turn our backs on the suffering of other people … and this is not Judaism, this is what Pope Francis is talking about, that we can’t just worship billionaires and the making of more and more money. Life is more than that,” he said.

Sanders stopped just short of endorsing marijuana legalization and making many of his liberal fans happy.

“I am not unfavorably disposed to moving towards the legalization of marijuana,” he said.

“We have more people in jail today than any other country on earth … we have large numbers of lives that have been destroyed because of this war on drugs and because people were caught smoking marijuana and so forth. I think we have got to end the war on drugs.”

In response to Kimmel’s assertion that some say Sanders is too old, too far left and doesn’t brush his hair enough, the Vermont senator didn’t seem fazed.

“It turns out that in many of the polls I am doing better than Hillary [Clinton] is against Donald Trump,” Sanders said.

“Everybody knows that a college degree today is more or less the equivalent of what a high school degree was 50 years ago, right? So we have free public education through high school, and I think in a very competitive global economy what we have to say, if we want to compete, we’re going to have to have colleges’ and universities’ tuition free in the United States of America,” Sanders said.

One of Sanders’ more innovative proposals is opening up banking stations in post offices, and Kimmel asked him about it.

“We have millions and millions of low-income people who have to go to these pay day lenders and pay outrageous interest rates, they get ripped off right and left. We can have our postal service provide modest banking to low income people where they can cash their checks and they can do banking,” Sanders said.

On Larry David’s portrayal of him: