Ban calls on Israel to make gestures for peace 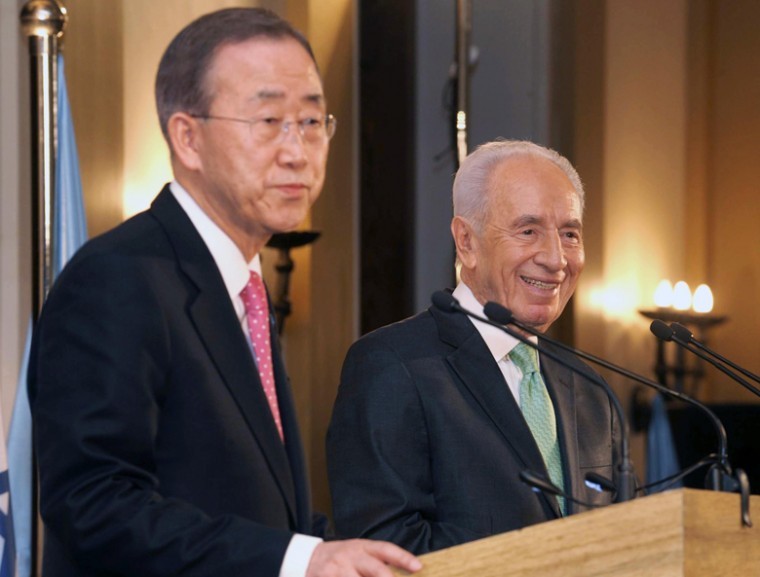 JERUSALEM — United Nations Secretary-General Ban Ki-moon called on Israel to make some positive moves toward the Palestinians in order to bring them back to the negotiating table.

Ban was in Jerusalem Wednesday for meetings with Israeli leaders. He was scheduled to meet in the evening with Palestinian Authority President Mahmoud Abbas in Ramallah.

“Unfortunately the two-state solution has not yet materialized, and the question is how to create the conditions that will propel the peace process further and spread democracy in the region,” Ban said during a meeting with Israeli President Shimon Peres. “I hope that in this visit I will be able to make a contribution to these issues. It is my intention to convey the same message to Abbas tonight and to call both sides to resume negotiations.

“It is not possible to avoid direct negotiations. We must create a political vision between the two sides, alongside goodwill gestures by both sides on the ground, and steer clear of provocation.”

Ban also expressed his concern about Iran’s nuclear program, saying “It is very important that the international community engage in a dialogue with the Iranian authorities to resolve this issue peacefully. I urge the Iranians to engage in dialogue. There is no alternative to a peaceful resolution of this issue.”

Meanwhile, the U.S. State Department on Tuesday criticized an Israeli plan to subsidize housing in 557 rural communities considered national priority areas, since about 70 of them are West Bank settlements. Many of the settlements on the list are likely to be given up as part of a peace deal with the Palestinians, the Associated Press reported.

“We find those [moves] unconstructive and unhelpful,” State Department spokesman Mark Toner said Tuesday in response to a reporter’s question. “We’re seeking clarity on what is actually being proposed here.

“You’ll have to ask the Israeli government what their intent is here. But this [direct peace negotiations] has to be something that the both sides want to pursue and to do so in a meaningful and committed fashion.”