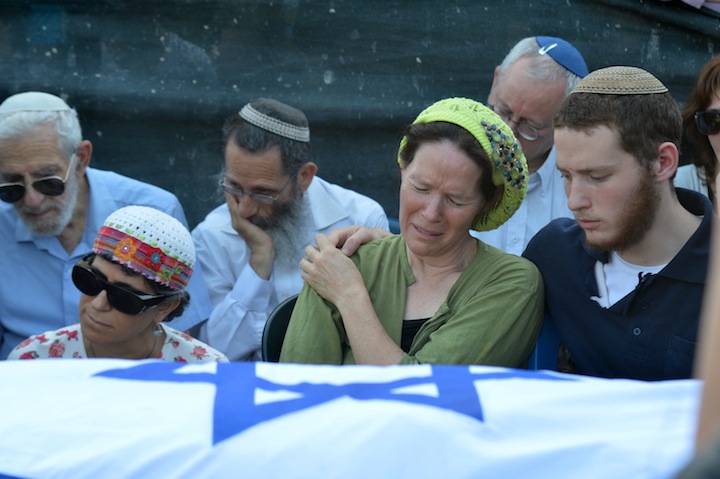 Rachel Fraenkel, the mother of Naftali Fraenkel, crying over the body of her son at the joint funeral for three murdered Jewish teens in the Modiin cemetery, July 1, 2014. (Flash 90)

The joint funeral Tuesday of Naftali Fraenkel, Gilad Shaar and Eyal Yifrach provided a capstone to a harrowing ordeal that over 18 days united Israelis in hope and prayer. When the teens were found dead Monday night, their bodies lying half exposed in a field near Hebron, the national outpouring became one of grief and despair.

It is simultaneously a national tragedy for Israel and a personal one for the boys’ families. And at the funeral and the memorials preceding it, the national and personal melded together.

The country shared in the families’ tragedy. The families became national heroes.

“We prayed, each of us alone and all of us together, for a miracle,” said Israeli President Shimon Peres in his eulogy. “We prayed that we would see them return in peace to the families, to their homes and to us all. Sadly we were hit by the tragedy of their murder and a deep grief enveloped our people.”

When news of the boys’ death hit Monday night, Israelis looked lost, unsure how to proceed after more than two apprehensive weeks since the teens were kidnapped on June 12 while hitchhiking in the West Bank settlement of Kfar Etzion.

At Tel Aviv’s Rabin Square — the site just a day before of a packed, loud concert in solidarity with the boys’ families — a much more subdued vigil coalesced. A few men sat on the floor with guitars singing as several others lit candles that spelled out the boys’ names. Soon the crowd swelled to hundreds, all singing songs of mourning and comfort.

The next day, outside the synagogue in the rural central Israeli town of Shaalvim, a crowd of hundreds milled in an open field. Five boys sat on the ground reading from prayer books. Some people spoke in hushed tones. Most stayed silent, exhausted from the heat, beaten by the tragedy. They were the neighbors, the friends, the family of Naftali Fraenkel.

Shaalvim resident Debbie Schuval noted the emotions and hope that had been invested in the teens returning home.

“There was almost this energy of mission, this energy that was buzzing about,” she said. “By last night the energy just dissolved and it was just quiet.”

A microphone stood underneath a bare frame meant for a wedding canopy, against the backdrop of a large Israeli flag. Speaker after speaker — the village rabbi, Israeli Education Minister Shai Piron, Fraenkel’s grandfathers and parents — told the largely religious Zionist crowd about the 16-year-old’s tenderness and the state’s resilience. Some mixed memories of the boy with calls for a forceful strike against Hamas, which Israel blames for the murders, or for increased Israeli settlement in the West Bank.

When Naftali’s mother ascended the podium, the subdued crowd broke into tears. Since the boys went missing, Rachel Fraenkel had become an increasingly fierce public advocate for them in international forums, speaking to a range of media and appearing at the United Nations. On Tuesday, though, her words were directed to the Israeli people and to her son.

“From the very first day, we said to ourselves that even if it ends badly, God gave us an abundance of blessings,” she said. “Our prayers were never for naught.”

After the memorial service, the crowd boarded a fleet of buses bound for the nearby cemetery where the boys would be buried in a valley near this central Israeli city. Soon they joined a sea of people — like them, overwhelmingly religious Zionists — all streaming toward the graves. People climbed over rocks, through ditches and along dirt paths, all to squeeze in among the thousands of people who had gathered to put the boys to rest.

Old and young squeezed next to each other. Paramedics holding stretchers pushed through to treat those who had fainted in the heat. One group would begin to sing a somber Jewish song, only to be drowned out by another group across the cemetery that had chosen a different tune.

The gathering was, perhaps, the last manifestation of how this tragedy has captivated Israel, dominating its news and bringing a sense of unity to the country that had long felt absent. And the speeches at the cemetery focused on the kidnapping’s national aspect.

“A whole nation stood together and got a reminder of who we are, why we are here and, no less, what great strengths are found within us,” Israeli Prime Minister Benjamin Netanyahu said, addressing the victims’ families. “The light shining from you stood out all the more against the horrible darkness of those who seek our souls.”

Throughout the crisis, there was talk of national unity, of terrorism, of politics and of sacrifice. But when Rachel Fraenkel spoke outside the synagogue in Shaalvim, remembering how much Naftali loved music, it was clear that at its core, this was a tragedy of three families who had lost their boys.

“Rest in peace, dear son,” Fraenkel ended her eulogy. “We’ll learn to sing without you.”