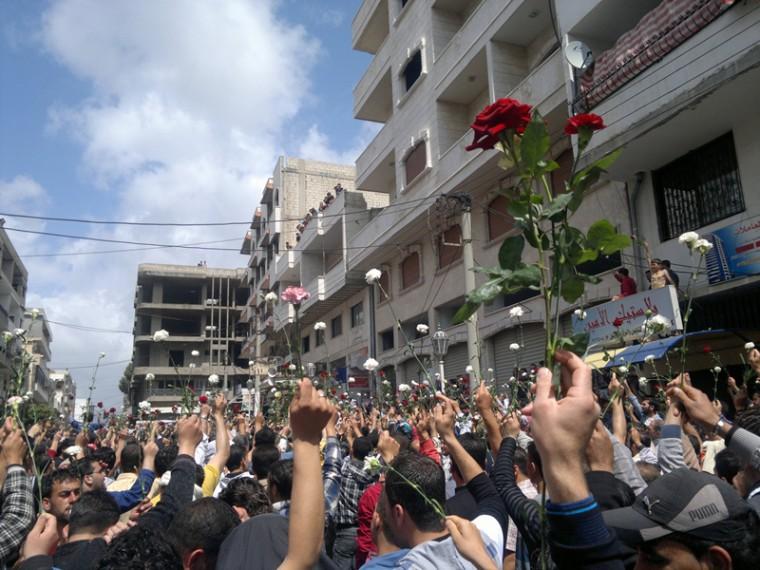 Syrians demonstrating in the coastal city of Banias against the regime of hard-line leader Bashar Assad in the spring of 2011.

WASHINGTON—As the Syrian government intensifies its assault on opposition strongholds, the debate is heating up in Washington over how to end the bloody crackdown and bring about regime change.

The Obama administration has tried to ratchet up pressure on the Syrian regime through international diplomacy and strong economic sanctions. But U.S. efforts have run into roadblocks at the United Nations, where opposition by Russia and China quashed a Security Council resolution on Syria.

Some in Washington argue that the administration needs to try new avenues if it is to rein in the Syrian regime. In Congress there have been calls for direct U.S. aid to the Syrian opposition. A few prominent senators are urging the arming of the regime’s foes.

“What they’ve tried to do is topple the regime through diplomatic isolation and coercion, but the regime is still there,” said Daniel Byman, research director at the Brookings Institution’s Saban Center for Middle East Policy, referring to the Obama administration’s efforts. “It’s hard to change a regime-they fear giving up power, and of course they want to keep power for its own sake.”

A Senate resolution introduced earlier this month by U.S. Sen. Bob Casey (D-Pa.) and a bipartisan group of six other senators demanded that Syrian President Bashar Assad step down and called for “substantial material and technical support” for Syrian opposition groups.

“The international community can and should do more to support the people of Syria during this terrible hour in their history,” Casey said in a statement.

On Feb. 16, however, the Senate Foreign Relations Committee passed a different Syria resolution, sponsored by the committee’s chairman, Sen. John Kerry (D-Mass.). That resolution did not call for material support for opposition groups.

Sens. John McCain (R-Ariz.), Lindsey Graham (R-S.C.) and Joseph Lieberman (I-Conn.) have all urged the arming of the opposition, though they have suggested that this could be done without the U.S. directly providing the arms.

“I believe there are ways to get weapons to the opposition without direct United States involvement,” McCain said Sunday. “The Iranians and the Russians are providing Bashar Assad with weapons. People that are being massacred deserve to have the ability to defend themselves.”

While the Obama administration has signaled a willingness to consider offering humanitarian aid to help the Syrian people, it has ruled out arming the opposition.

“As the president himself made absolutely clear, and as the secretary [of state] has continued to say, we don’t think more arms into Syria is the answer,” State Department spokeswoman Victoria Nuland said during a Feb. 7 briefing.

In the wake of the vetos by Russia and China of a U.N. Security Council resolution backing the Arab League’s call for Assad to relinquish power, the U.S. and its allies have continued to push for progress on other diplomatic fronts. On Feb. 16, the U.N. General Assembly overwhelmingly passed a non-binding resolution in support of the Arab League call, with Russia and China voting against the measure.

“Our focus is on squeezing the regime by imposing all sanctions at our disposal and increasing its diplomatic isolation; bolstering the Syrian opposition and working to cement its organization and unity; and working to provide humanitarian aid to the Syrian people,” said an administration official, speaking on condition of anonymity.

The official pointed to the formation of the Friends of Syria group, a coalition of nations meeting for the first time on Feb. 24, and said the grouping “will allow a wide range of concerned international parties to collectively support the Syrian opposition and ensure that the political transition underway in Syria moves ahead successfully.”

Some observers, however, argue that any political transition will be a bloody one.

“What [the Obama administration] wants to see in Syria is a peaceful political solution,” said Tony Badran, a research fellow at the Foundation for Defense of Democracies. “Anybody who is looking at the situation objectively on the ground sees that as an impossibility. There is not going to be a peaceful political solution and it’s going to be a bitter war to the very end.”

Badran said that those fighting the Syrian regime should be given arms.

“If we’re not willing to deploy our assets to level the playing field and cripple Assad’s military power, then at the very least we have to do so by supporting the people that are fighting on the street, and I think that’s where the conversation is headed,” he said.

Byman said the U.S. “should be trying to work more with the Syrian opposition because there’s so much that depends on them” and that he is supportive of arming the opposition. However, he argued, that is “practically very hard to do right now.”

“I think there’s a level of ignorance about who the members of the opposition are in Syria,” he said. “In Libya there was a front and you could walk up to the front and find out who is who. In Syria, you do not have that clarity.”

Other ideas are in play as well.

In a policy brief released by the Center for a New American Security, political scientist Marc Lynch argued that the international community should give Assad and top Syrian officials an ultimatum, warning that if they don’t resign they will be referred to the International Criminal Court. Among his other recommendations, Lynch suggests that the international community should “strengthen the opposition and encourage it to develop a unified political voice.”

Lynch, the director of the Institute for Middle East Studies at the Elliott School of International Affairs at George Washington University, strongly advised against U.S. military intervention in Syria, arguing that “unleashing even more violence without a realistic possibility of changing the regime’s behavior or improving security is neither just nor wise.” He warned that arming the opposition “might simply lead to a bloodier conflict” and would “work at cross purposes with diplomatic and political efforts to find a managed transition that avoids the worst outcomes.”

American Jewish groups have been vocal in their condemnations of the Syrian regime’s crackdown, with the Anti-Defamation League and American Jewish Committee issuing statements applauding the General Assembly resolution on Syria.

While Israel initially seemed wary regarding the uncertainty of what would follow in the wake of any regime change in Syria, Israeli leaders have been issuing strong calls for Assad to go. In early February, Israeli President Shimon Peres called Assad a “murderer” with no future, while Foreign Minister Avigdor Lieberman said in a radio interview that “any alternative was better than Assad.”

In a Feb. 7 New York Times Op-Ed, former Mossad chief Efraim Halevy argued that the Syrian uprising presents an opportunity to end Iran’s use of Syria as a base of its influence in the region.

“Ensuring that Iran is evicted from its regional hub in Damascus would cut off Iran’s access to its proxies (Hezbollah in Lebanon and Hamas in Gaza) and visibly dent its domestic and international prestige, possibly forcing a hemorrhaging regime in Tehran to suspend its nuclear policies,” Halevy wrote.

However, others caution that regime change in Syria poses potential dangers to Israel.

“Of all the things for Israel to be concerned about regarding the fall of the Assad regime is Syria’s extensive stockpile of chemical and biological weapons,” said James Colbert, director for policy at the Jewish Institute for National Security Affairs. “While a successor regime will likely be no more friendly to Israel than was the Assad regime, it may not have as tight command and control over these assets.”

This article was produced in cooperation with the Washington Jewish Week.