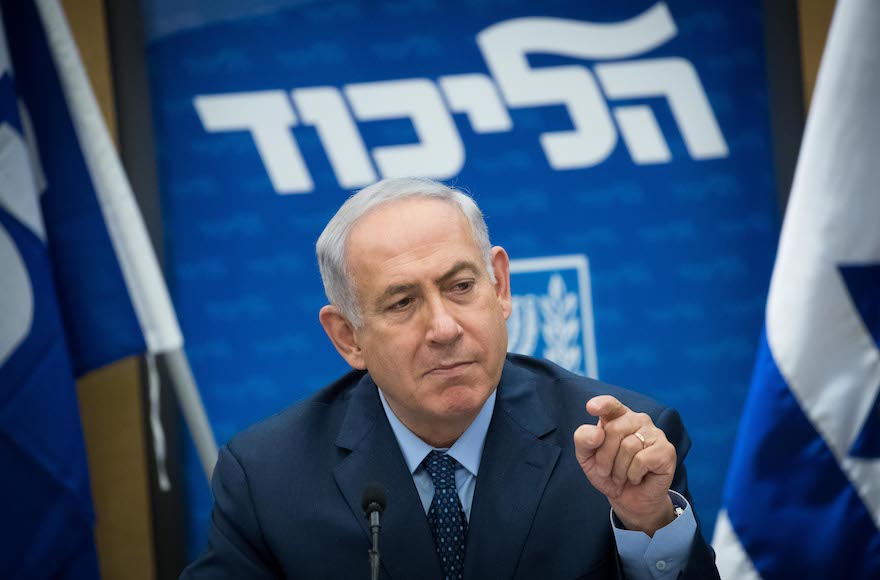 JERUSALEM (JTA) – Facing mounting scandals, Prime Minister Benjamin Netanyahu accused the “fake news” media and “leftists” of trying to take him down with a campaign of lies.

In a hastily organized meeting with political allies Thursday, Netanyahu denied any wrongdoing in two erupting controversies involving his associates, the Hebrew media reported. The prime minister reportedly said he was the victim of “a coordinated campaign of leftists who want to undermine my government.”

At the gathering in his office here, Netanyahu rallied the members of his Likud party to defend him from the alleged campaign, which he said includes politicians and members of the news media, according to leaks. Channel 2 reported that the purpose of the meeting was to prepare a “media blitz” in the coming days.

Meanwhile, authorities moved ahead Thursday with their investigations into the affairs. Police interrogated Netanyahu’s personal lawyer for the fourth time on suspicion of corruption in Israel’s multibillion-dollar purchase of German submarines. And the Israel Securities Authority, or Shin Bet, questioned the Communications Ministry’s director-general, who is suspected of fraud. Netanyahu until recently was acting communications minister.

The prime minister has not been implicated in either case and has adamantly denied any wrongdoing.

Hours after the meeting, Netanyahu posted on Facebook an image of the logos of seven of Israel’s leading news publications under the English words “Fake news.” Included were TV Channels 2 and 10, the newspapers Yediot Acharonot and Haaretz, and the Walla web portal.

In text accompanying the post, Netanyahu said the news media were trying to indoctrinate the public but would fail because of the enlightening power of social media.

“The fake news method is simple: They paste a picture of the prime minister on bombshell headlines with baseless accusations and expect this brainwashing will do the work on public opinion,” he said. “To their dismay these days, this doesn’t go for them because the people of Israel have the chance to say their opinion and the truth – and expose their lies on social media.”

Donald Trump – the U.S. president at the center of various legal and ethical controversies – has used similar rhetoric to fend off criticism. He brought the term “fake news” — originally referring to intentionally bogus articles shared on social media — into mainstream discourse and has hurled it repeatedly at the media, singling out CNN, The New York Times and the Washington Post.

Trump and his advisers have dismissed government probes into whether his current and former associates colluded with the Russians to meddle in the 2016 presidential election, saying the investigations are part of an effort by Democrats to discredit his victory. They have also tried to change the subject by pointing to supposed wrongdoing by his defeated rival for the White House, Hillary Clinton.

Like Trump, Netanyahu is known to carefully monitor his media coverage, and reportedly he was dismayed to see his name in a battery of unflattering headlines this week. Even Yisrael Hayom, the broadsheet owned by American Jewish billionaire philanthropist Sheldon Adelson that traditionally has been deferential to Netanyahu, seriously covered the scandals this week.

In the “submarine affair,” David Shimron, Netanyahu’s personal attorney and cousin, is suspected of trying to sway Israel’s purchase of subs in favor of the German shipbuilder ThyssenKrupp, which he represented. Netanyahu pushed for Israel to buy the vessels against the wishes of the Israel Defense Forces and then-Defense Minister Moshe Yaalon.

Yaalon, who is forming his own political party to challenge Netanyahu, on Thursday called Netanyahu “corrupt” and said he should resign over the scandal. Yair Lapid, the head of the opposition Yesh Atid party and a top political rival of the prime minister, said Wednesday it was “undoubtedly the biggest corruption case in the history of the state” and questioned how the prime minister could have not know that his lawyer represented ThyssenKrupp.

In the probe involving the Communications Ministry, the director-general, Shlomo Filber, is suspected of ethics violations and securities fraud in a case involving the national telecommunications giant Bezeq. On Wednesday, Israel’s State Comptroller released a report that accused Netanyahu of failing to originally disclose his close ties with Bezeq head Shaul Elovitz, and raised suspicions that the prime minister and Filber made decisions at the Communications Ministry in favor of the company.

Police have also been repeatedly questioned Netanyahu in separate investigations of his acceptance of gifts from billionaire friends and negotiation of an illicit deal with Yediot publisher Arnon Moses to get better coverage in his newspaper. Netanyahu repeatedly said of all the scandals, “There will be nothing because there is nothing.”

Netanyahu’s supporters came out of Thursday’s meeting vowing to fight back on his behalf.

“We are going on the attack,” Likud lawmaker Miki Zohar said. “We are fed up with all the unforgivable slander about the prime minister. We have clear details that show that he had no connection with any of the cases in question. It is time to stop blaming him for everything that is happening in the country.”

This week is not the first time Netanyahu has borrowed language from Trump, with whom he has aimed to forge close ties. Weeks before warmly welcoming the president and his family to Israel in May, Netanyahu released a Facebook video accusing American media publications, including CNN and The New York Times, of “fake news” for their coverage of Hamas.