(JTA) — In April, Rebeca Posternak and her parents went out for a sushi dinner to celebrate her 23rd birthday in Boa Viagem, a suburb of her native city of Recife, Brazil.

Throughout much of Brazil, and in Recife especially, people with money in their wallets keep their time on the street at a minimum for fear of robbery. But because of social distancing connected to the coronavirus, the sushi restaurant had fewer seats and the Posternaks had to wait outside for a table.

A homeless beggar approached them asking for clean water and bread. The man explained that he used to sleep relatively comfortably on the beach, but Brazilian beaches — they have taps with relatively clean drinking water — were closed to stem the spread of infections. That forced the man to sleep in the street, where older people like him are in danger of being preyed upon by younger people.

“He had been chased out of the restaurant before he approached us,” Posternak said. “They treated him as if he were garbage.”

The encounter put Posternak in touch with her privilege.

“But it also exposed me to aspects of reality for many, many people that we haven’t even considered, that we don’t see on the news,” she said.

By the time they reached home from the sushi restaurant, the Posternaks had resolved to convert their family sweets and pastries store, called Doce de Comer, into a soup kitchen.

They employed the store’s employees as cooks and packers, and Posternak’s mother, Luciana, recruited her Jewish friends from the local branch of the international Jewish-Zionist women’s group Na’amat to help. Now about a dozen members of that group and other Jewish women from Recife are cooking some 400 meals eachweek at the Posternaks’ store to be distributed in Recife’s streets and poorest neighborhoods, called favelas.

The grassroots operation is one of dozens of coronavirus-related aid initiatives by Jews in Brazil, which is among the countries hardest hit by the pandemic. In Rio de Janeiro, Sao Paulo and Porto Alegre, among other places, the local branches of the CONIB federation of Jewish organizations mounted charity drives that have collected money, food and protective gear for medical staff and needy populations.

Rabbi Gilberto Ventura and his wife, Jacqueline, the founders of the Sao Paulo-based Sinagoga Sem Fronteiras, or Synagogue Without Borders congregation, have been distributing food packages in that city, Brazil’s largest municipality.

“There has been an impressive mobilization by Brazilian Jews during this time,” said the rabbi, whose own aid operation is being funded by the Sao Paulo Jewish philanthropists William Jedwab and Silvia Kaminsky. “Brazilian Jews are punching way above their weight in their response to this tragedy.” 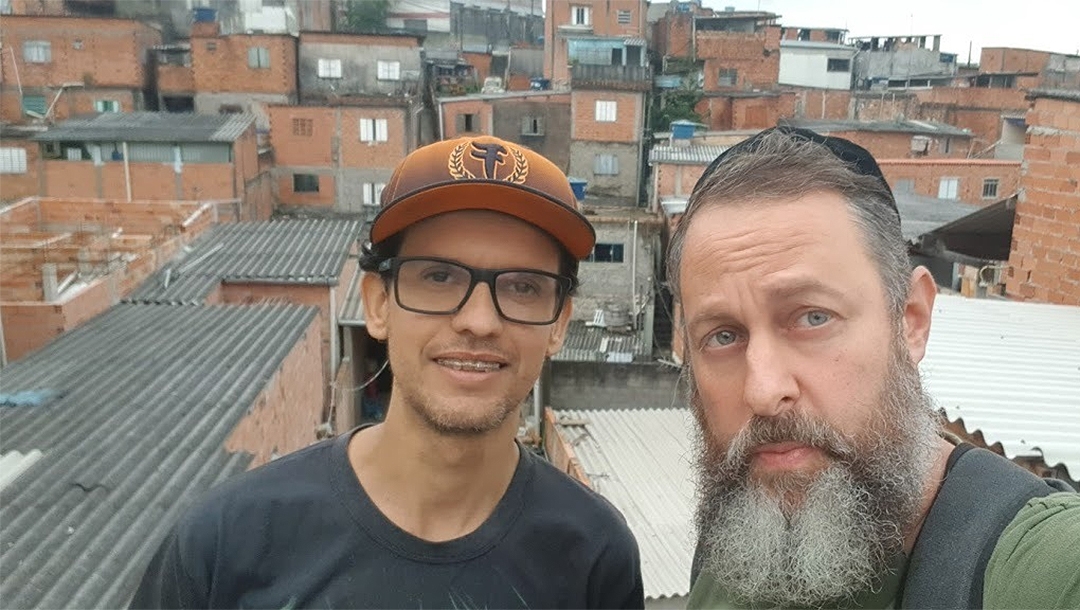 Rabbi Gilberto Ventura, right, and a volunteer in a favela of Sao Paulo, May 27, 2020. (Courtesy of Sinagoga sem Fronteiras)

Brazil has South America’s second-highest death rate from the coronavirus, with 140 fatalities per million inhabitants, or about 30,000 dead. Especially in the country’s poor north and interior, in cities such as Manaus, public hospitals that many considered inadequate before the pandemic have been overwhelmed by it.

Complicating matters in Brazil is a political crisis that has led to the resignation of two health ministers and an open row between President Jair Bolsonaro, who opposes blanket lockdowns, and state governors who imposed them.

“There’s a lot of confusion about what you’re supposed to do and not to do, and it’s not helping the effect to stop the virus from spreading,” said Andrea Engelsberg, a volunteer working with the Posternaks and a local aid group called Novo Jeito to help distribute the food they prepare to people’s homes.

To Engelsberg, a 53-year-old economist and mother of two, the volunteer work is “humanitarian and universal,” and not necessarily rooted in her Jewish identity. But for Posternak, “it’s a mitzvah, something that’s rooted in my Jewish culture and upbringing.” She attended Brazil’s oldest Jewish school, Moyses Chvarts, which was established over a century ago in Recife, and now studies psychology.

Brazil’s favelas are infamously densely neighborhoods, often featuring small, ramshackle apartments and shops. They’re overpopulated, unsanitary and hotbeds of crime usually avoided by police and other civil servants. Some dwellings have no running water and dangerous messes of electric wiring.

“The conditions I saw are terrible,” Engelsberg said. “Sewers are backed up, sanitary supplies are missing and in the favelas, families are living in such crowded conditions that social distancing is not practically possible.”

The lockdown imposed in many Brazilian states and cities has pushed countless working-class families, who had been struggling to make ends meet, into the neediest category, according to Gilsom Garcia, a social welfare activist from Sao Paulo and a father of three who has been unable to find work as an electrician during the pandemic.

“It’s a knock-on effect: The lockdown eliminated the sole source of income for hundreds of thousands of families where the breadwinners work without or with very little social benefits as chauffeurs and housemaids for richer households,” Garcia said.

At the end of 2019, Brazil had 6 million domestic workers – more than any other country in the world – and most of them were working without contract or social benefits, according to the Rede Globo broadcaster.

“COVID-19 pushed many of those working-class families into the extreme poverty category,” said Garcia, a 35-year-old with three children.

Food packages have the potential of saving lives in more ways than providing nutrition, said Garcia, who is delivering packages through Rabbi Ventura’s initiative.

“There are government food distribution points, but people queue up there without maintaining social distancing, coughing on one another,” he added. “Delivering food to people’s homes reduces this exposure.” 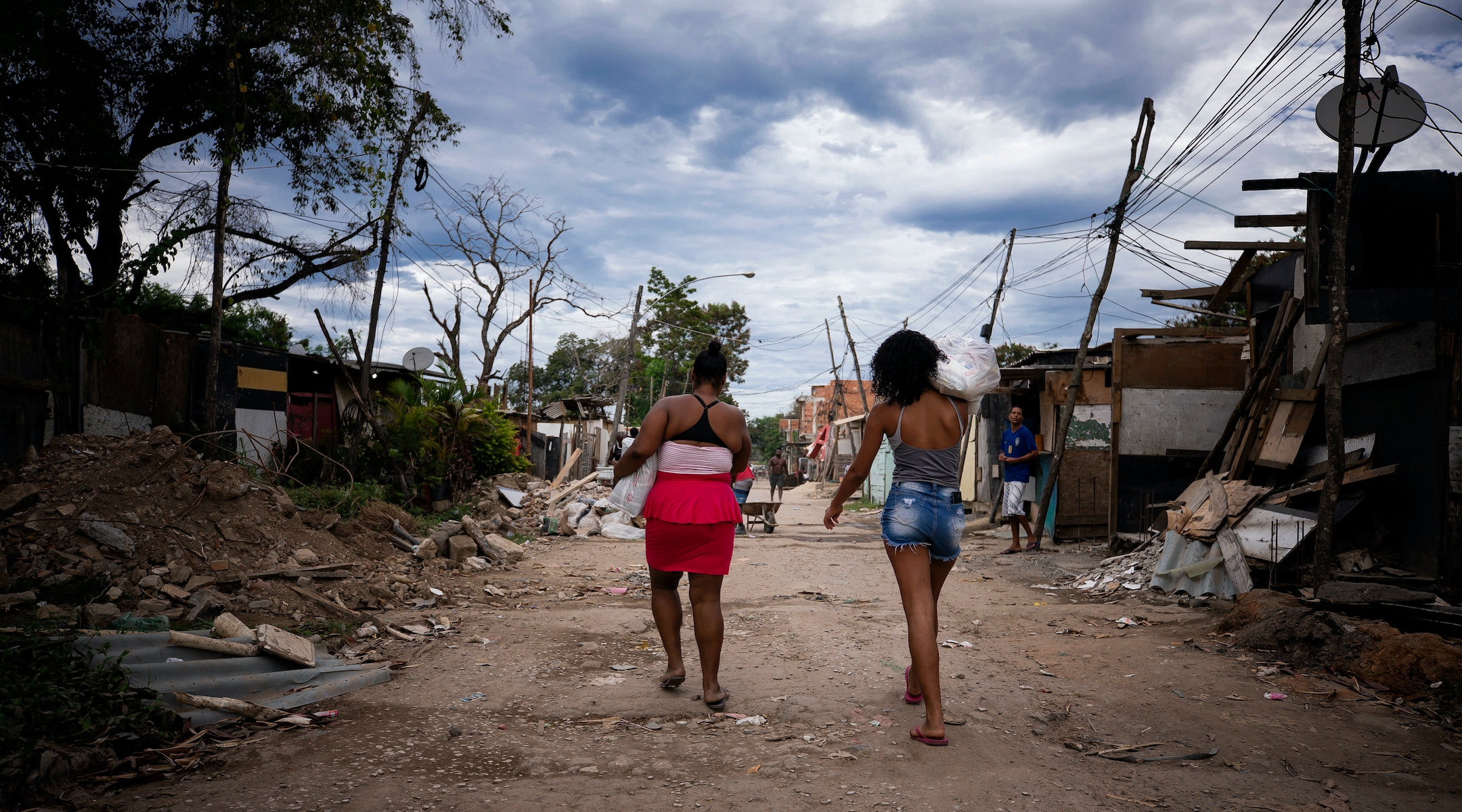 In stark contrast, infections among the Jewish community, which in Brazil is largely affluent and educated, have been minimal, and only a handful of members have died from COVID-19.

Most Brazilian Jews, who are predominantly Ashkenazi and descended from people who fled Europe in the 1930s and ’40s, live in gated communities or apartment buildings in large cities. Many are unaffiliated, but organized communities in Rio de Janeiro and Sao Paulo have large memberships, prestigious summer camps, popular Jewish schools and rich cultural activities.

So for the most part, Brazilian Jews have the means to stay safer than many other compatriots during the pandemic.

Conditions, however, are worse in Brazil’s newest Jewish communities, which include many bnei anusim — people with Sephardic roots who only recently discovered their Judaism or returned to it centuries after their ancestors concealed it for fear of persecution during the Portuguese Inquisition.

“None of our members are in very bad conditions, but there are a few families in the community that are having a tough time, locked down with six people in a two-room apartment with one bathroom,” said Gershom Manoel de Lima, president of the Ohel Avraham congregation in Recife.

Made up mostly of bnei anusim, his community of a few dozen members was established in recent years under Ventura’s guidance.

“We help them as much as we can,” de Lima said.

The bnei anusim communities tend to have working-class members from blue-collar neighborhoods where few Ashkenazi Jews live. Conditions in those neighborhoods are far better than in favelas, but less affluent than in the luxury apartment buildings of the upper middle class Brazilian Jews.

About 1,200 miles southeast of Recife, in the federal capital of Brasilia, Edson Mendanha and Nádia Vitorino, a married couple of bnei anusim ancestry who underwent an Orthodox conversion to Judaism several years ago, distribute food to the needy and try to avoid getting infected as they wait “for life to return to normal,” Mendanha said.

He reconsidered his wording.

“Actually, maybe things will never get back to normal. Maybe they shouldn’t,” Mendanha said. “This pandemic revealed some disturbing issues in our society and politics. They need to change.”