An avowed one-stater is about to be elected to Congress. Is this the future of the Democratic Party? 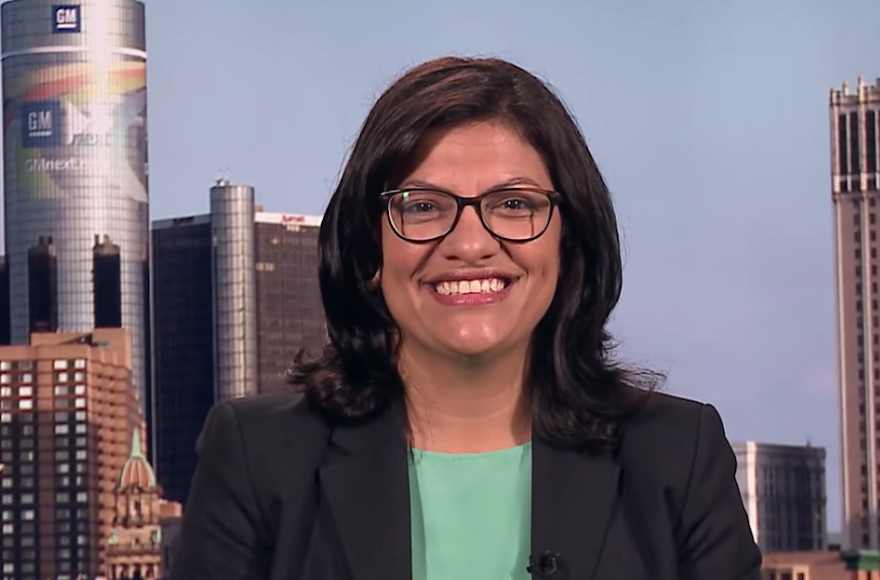 Ron Kampeas
WASHINGTON (JTA) — Rashida Tlaib, the Democratic nominee in a surefire congressional district comprising parts of Detroit, believes in a one-state solution to the Israeli-Palestinian conflict and says she would vote against military assistance for Israel.

Does she represent a trend? Republicans would like you to think so.

“This is the Democrat (sic) party,” the Republican Jewish Coalition tweeted, attached to a story about Tlaib’s view on military aid.

Is Tlaib indeed the future of the Democratic Party or an outlier?

Most Democrats did not see eye to eye with Israel over how to stop Iran from becoming nuclear. But frustration with Netanyahu over his pugnaciousness and disagreements with a Democratic president led — some would say freed — many Democrats to criticize Israel’s policies regarding the Palestinians. That was exacerbated by Netanyahu’s unabashed embrace of President Donald Trump, who pulled out of the Iran nuclear deal and moved the U.S. Embassy to Jerusalem.

In July, 70 Democrats in the U.S. House of Representatives — more than a third of the caucus — signed a letter urging humanitarian relief for the Gaza Strip, blaming both Israel and Hamas for the crisis.

That letter, in turn, referred to a May letter signed by 13 Democrats in the Senate — out of 49 — that used the same language to say Hamas and Israel were responsible for the suffering of Palestinians in Gaza.

Bernie Sanders has become an address for Israel criticism.

The Senate letter was initiated by Sen. Bernie Sanders, I-Vt., the Jewish candidate who ran a surprisingly strong campaign in 2016 for the Democratic presidential nomination. (Notably, the Israeli-American media mogul Haim Saban, a major pro-Israel Democratic benefactor, blasted the senators for signing on.)

In that campaign, Sanders set the stage for Israel-related factionalism within the party when he directly challenged Hillary Clinton on Israel issues in a debate on the eve of the New York primary.

In the debate, Sanders used Clinton’s favorable reception at the recent American Israel Public Affairs Committee conferences as a dig against her.

“You gave a major speech to AIPAC, which obviously deals with the Middle East crisis, and you barely mentioned the Palestinians,” he said.

A decade ago, a major candidate using AIPAC to ding a rival would have been unimaginable.

Sanders has since become the main address for Israel criticism within the party. His office has released three videos sharply critical of Israel since the March launch of Palestinian protests on Israel’s border with Gaza.

But Tlaib remains alone in her positions.

Sanders has also defended Israel on the left, rejecting the Boycott, Divestment and Sanctions movement targeting Israel last year in an interview on Al Jazeera.

J Street, the liberal Jewish Middle East policy group whose overarching issue is two states, endorses more than half of the Democratic caucus in both chambers. It pulled its endorsement of Tlaib after her post-primary revelation that she opposes aid to Israel and backs a one-state solution.

Like many proponents of an independent state for Palestinians side by side with Israel, J Street rejects any solution that would “threaten Israel’s identity as a democracy and a Jewish homeland.”

When it comes to the one-state solution — that is, a binational “Isratine” in which West Bank and presumably Gazan Palestinians are given the vote — Tlaib is even an outlier among the two women with whom she is most frequently grouped, Alexandria Ocasio-Cortez of New York and Ilhan Omar of Minnesota.

Like Tlaib, they are both progressive House nominees who have sharply criticized Israel in the past. Unlike her, both have embraced the two-state outcome and resisted signing onto the BDS movement.

“We have a very, very small number of problematic candidates with views on Israel,” said Haley Soifer, the CEO of the centrist Jewish Democratic Council of America.

Remember who Tlaib is.

Much of the focus of the “is Tlaib a trend” talk is on the degree to which the Democrats are ready to impose party discipline. But there has been a tradition within both parties of allowing lawmakers to stray from orthodoxies depending on their constituents and their own ethnic communities.

Consider, for instance, Sen. Robert Menendez of New Jersey, who is as strident as ever in his insistence on isolating Cuba, although his Democratic Party has moved since Obama toward more openness. Democrats are not likely to second-guess a Cuban American for being a hardliner.

That thinking would apply to Tlaib, whose parents are from the West Bank, said James Zogby, the president of the Arab American Institute and a Democrat close to Sanders.

“Rashida is a Palestinian-American woman who grew up heavily steeped in her culture and the circumstances of her issue,” he said. “She’s more aware of the Palestinian issue than anyone in Congress before her. It’s in her bones, it’s in her blood.”

You want a one-state trend? Look to the Republicans.

The Trump administration, meanwhile, has retreated from endorsing a two-state outcome, and the Republican Party platform in 2016 also removed two-state language.

Of course, the one-state outcomes favored by Republicans is one preferred by the pro-Israel right, not the pro-Palestinian left. That version envisions permanent Israeli control of much of the West Bank. But that posture creates openings for the far left, according to Logan Bayroff, the director of communications for J Street.

“Any conversation about rise in support of a one-state solution should note the fact that our current administration has distanced itself from the two-state solution,” he said.

Zogby, a proponent of the two-state outcome, says support for one state is also fueled by the actions of an Israeli government that seems set on closing off the former.

“Saying ‘I support two states’ has become a way of absolving yourself and doing nothing while Israel every day makes achieving two states harder to achieve” through settlement expansion and other measures, he said.