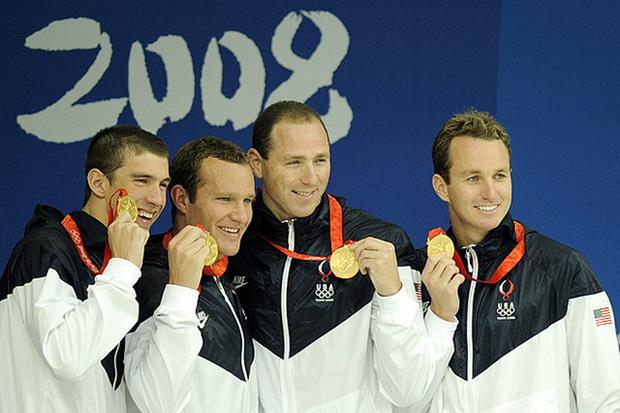 Jason Lezak, second from right, after winning the gold medal for the U.S. 400-meter medley relay team at the 2008 Summer Olympics in Beijing, August 2008.

BALTIMORE (JTA) – Jason Lezak — no newcomer to Olympic glory — recognizes the difficulty in returning to the medal stand at the London Games.

“I definitely would hope to … get onto the podium there and win a medal for the USA,” Lezak, a seven-time Olympic medalist, told JTA on Tuesday from the U.S. swim team’s training camp in France. “With Australia, France and Russia, there’s going to be a lot of tight competition, and it’s not going to be easy, that’s for sure.”

The Jewish swimmer, the winner of four Olympic gold medals, will race for the United States in the 400-meter freestyle relay — the event in which he provided one of the most enduring moments of the 2008 Games in Beijing. His frenetic sprint to the finish in the last leg, overcoming world record-holder Alain Bernard, earned victory for the U.S. and kept alive Michael Phelps’ drive for a record-setting eight gold medals.

This year, in his fourth Olympics, the 36-year-old Lezak is one of five captains for the 530-member American squad. Fellow Jews joining Lezak on the U.S. contingent at the London Games, which has its opening ceremonies on July 27, include swimmer Anthony Ervin, gymnasts Alexandra Raisman and Julie Zetlin, rower David Banks, fencer Tim Morehouse and fencing coach Yury Gelman.

(Illinois-born Jillian Schwartz, a pole vaulter on the American team at the 2004 Athens Olympics, will be representing Israel.)

For Robert Dover, who won four medals while competing in equestrian events in six Olympics for the United States, the road to Olympic glory began on Grand Bahama Island in 1969, where he celebrated his bar mitzvah. The event became unforgettable when his parents arranged for a horse to be flown in as the boy’s present.

“It was a great first horse for me. His name was Ebony Cash,” said Dover,  who grew up in Chicago and Toronto and is now heading to his seventh Olympics — for the first time as a coach and this time for Canada’s equestrian team.

Like Lezak, Gelman is heading to his fourth Olympics, all as a coach. He taught fencing to elite athletes in his native Kiev, then moved to New York in 1991. He couldn’t find work in America in his field, so Gelman spent a year-and-ahalf selling doughnuts at a flea market along a New Jersey highway.

Gelman would go on to serve 17 years as the fencing coach at St. John’s University in New York, and in 2007 he opened the Manhattan Fencing Center.

Morehouse and three other Gelman proteges qualified for London, where the fencing events will begin on July 29.

“I’m very proud of our group, and we’ll try our best,” said Gelman.

The Brooklyn resident does not belong to a synagogue or other Jewish groups, which he attributes to the Soviet repression that affected his late parents, Wolf and Malvina. Both were loath to introduce Judaism to their children because of the negative repercussions, he said.

“In the Soviet Union, we weren’t religious. It was prohibited,” Gelman said. “The Kiev synagogue was pretty far from where I lived. My parents never talked about it.”

Wolf and his sister were the only ones in their family to survive the Nazi massacre of Jews in the village of Gaisen, Ukraine. Gelman remembers his maternal grandmother, Esther Krakovitch, bringing matzah to their home for Jewish occasions, but he didn’t know anything about the Passover holiday to which, he later learned, the food correlated.

Dover does sometimes attend synagogue services in Wellington, Fla., the horse country where he lives most of the year. He says he is proud to be a member of the National Jewish Sports Hall of Fame and Museum.

“There are many more Jews in the sport than people know of,” Dover said.

In a best-case Olympics scenario, Dover said, Canada’s performance in Greenwich Park’s dressage arena will continue an upswing that saw the country attain seventh place at the world championships two years ago — its highest finish since 1988. Earning a bronze medal in London might take “almost a miracle,” he said, with England, Germany and either Demark or the Netherlands the favorites.

Even while coaching Canada’s three equestrians, Dover’s heart will remain stateside. His parents, who live in Austin, Texas, are ailing. So before heading overseas, he will visit his father, Herbert, 89, who lives in a treatment facility for Alzheimer’s patients. His mother, Jean, 84, has seen her body ravaged by the breast cancer she first fought four decades ago.

Dover believes that his mother, who lives nearby with his sister, is hanging on to watch her son compete one final time — this time on television instead of in person.

“My mom — I believe it will be the last time I will see her,” he said from his summer home in Fire Island, N.Y. “She’ll watch on TV. It’ll be live-streamed. That’s why she’s still here. She’s here until the Olympics.”

Dover, who served as U.S. equestrian captain at each of his six Olympics, recalled meetings with captains of the sports teams to select the country’s flag bearer for the opening ceremonies.

“The stories you hear about the various people and what they’ve done and their hardships — it’s something that leaves your mouth hanging open,” he says. “They are extraordinary people.”

For his part, Lezak also is one of many Jewish Olympians – including nine-time gold medalist Mark Spitz – who have competed in Israel’s Maccabiah Games.

A member of Temple Isaiah in Newport Beach, Cal., Lezak lit the torch to start the 2009 Maccabiah near Tel Aviv. He has followed reports of the International Olympic Committee’s refusal to honor the memories of the 11 Israeli Olympians murdered at the Munich Games 40 years ago with a moment of silence.

Lezak is still hopeful that the IOC will make what he called the “right decision” in London.

“It would be nice, in my opinion, to have that moment of silence, but there are also people out there who would hate for that to happen,” he said, adding that the IOC “would have to weigh all the positives and negatives of both sides. I cannot make that decision. [The IOC is] in a no-win situation.”