Alexander Levin’s got a name (and cash), but does he have a plan? 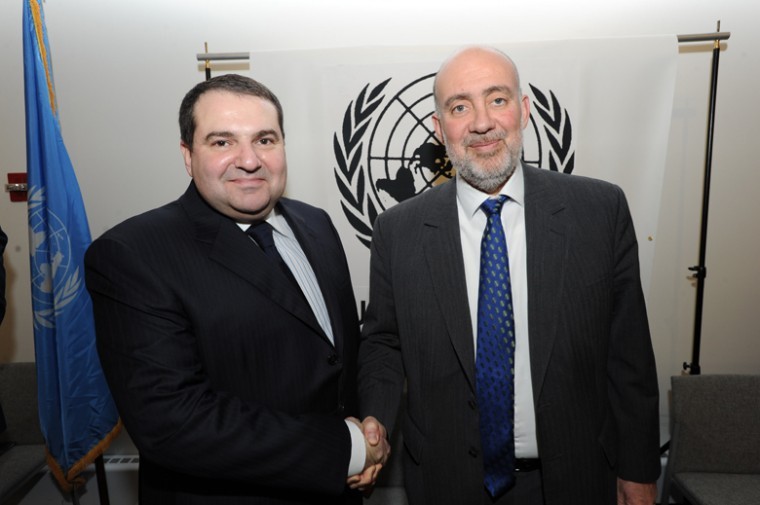 Ukrainian Jewish leader Alexander Levin, left, and Ron Prosor, Israel's ambassador to the United Nations, at the U.N. for the launching of the World Forum for Russian Jewry, Jan. 25, 2012.

NEW YORK—Ukrainian Jewish leader and real estate mogul Alexander L. Levin came to New York last week to launch the latest international Jewish organization with a grandiose name. Called the World Forum for Russian Jewry, this one aims to harness the power of Russian-speaking Jews the world over.

At the launch event Jan. 25 at the United Nations, Levin, who is the president of the Greater Kiev Jewish Community, talked about the need to bridge East and West and how Russian Jews can mediate between Washington and Moscow by influencing governments to stop Iran’s march toward nuclear weapons.

“We will push them to listen to us,” he said.

I wanted to understand more about how he planned on doing this, so I met with Levin the following day in a nondescript conference room he was borrowing in midtown Manhattan. Would he be meeting with high-level government officials? I asked him. Sending Russian Jews into the streets to stage demonstrations?

Levin was vague on the details—not intentionally so, it seemed, but rather because he hadn’t decided on them yet.

The most important thing to get Moscow to change its positions on Iran, Levin said, is for the United States to take a more compromising stance vis-à-vis the Kremlin. And if the U.S. administration won’t compromise, he suggested, the government of the United States could be overthrown.

If 100,000 Ukrainians could get rid of Ukraine’s government in 2004, during the Orange Revolution, Levin said, it just takes some extrapolation to figure out that a few hundred thousand people in America can get rid of an uncooperative president in Washington. It wasn’t clear whether Levin meant through revolution or elections.

I pressed Levin for more details on how Russian Jews figured into all this.

It’s all about genetics, he said. With the experience of two world wars, 70 years of Communism and the struggles of pogroms and immigration, Russians are hard-wired to fight for their lives. And if they believe they are threatened by Iran, they will do everything within their power to eliminate that threat. It’s not just Jewish Russians from around the world who could rally to this cause, but the 100 million or so non-Jewish Russians, too, he added.

“These people are used to fighting for their lives, for their kids, for everything,” Levin said. “This is a very powerful genetic trait.”

Levin emphasized that solving the Iran problem isn’t the only, or main, objective of the organization.

“The most important goal,” Levin said, “is to bring the messiah.”

Levin, who is clean-shaven and sports a black, knit yarmulke, is a Lubavitcher.

Levin is hardly the first Russian-speaking Jew to launch an organization with an international-sounding name and grandiose ideas about saving the Jewish people. In the fall of 2010, fellow Ukrainian billionaire Igor Kolomoisky pledged $14 million to the European Council of Jewish Communities—a low-profile organization founded more than 40 years ago to promote Jewish culture, heritage, education and community—to become its president and refocus the organization on political issues.

But when ECJC board members resigned in protest, Kolomoisky withdrew his bid (and his cash) and decided to start his own organization. This past spring, he and fellow Jewish Ukrainian billionaire Vadim Rabinovitch (a former ECJC vice president) created the European Jewish Union, whose first big project would be the establishment of European Jewish Parliament.

When the list of candidates was announced over the summer, people dismissed the whole thing as a joke. Candidates included soccer star David Beckham, filmmaker Roman Polanski, comic actor Sacha Baron Cohen, fashion designer Diane von Furstenburg and other famous and less-famous European Jews (including a JTA correspondent) who didn’t even know they were in the running—if they knew anything of the planned parliament at all.

At the same time, however, Rabinovitch and Kolomoisky were making plans to launch a 24/7 Jewish news channel called Jewish News One, which began broadcasting by satellite last September. The two reportedly have poured $5 million into the project.

If Levin’s idea is to be taken seriously, he’s going to need more than his own cash, a name and determination (he also reportedly has welcome letters from the Israeli prime minister and foreign minister). He’s going to need a real plan.

The more deeply I delved, the more it seemed that that plan doesn’t exist yet.

The organization has no projected budget, no executive director, no staff and no office. Levin told the Forward there are plans for 18 offices around the world, but it turns out there are no actual plans, just a desire for 18 offices.

Well, could Levin at least identify the 18 places where he wants to put them?

He hasn’t figured that out yet. All he’s got is the number, which he chose because 18 corresponds with “chai,” the Hebrew word for life.

“If you believe in God, there are two ways to keep the peace,” Levin concluded. “One, is if people are ready and doing everything to bring moshiach. Two, is if the situation is so bad that God send moshiach. We are working towards No. 1.”

Levin said the World Forum is still in an embryonic stage and needs time to nail down its exact goals, plans and strategy.

“We just created it yesterday,” he said.