Albert Speer, Hitler’s architect, tried to make a movie about his life. A new Israeli documentary chronicles his exercise in delusion. 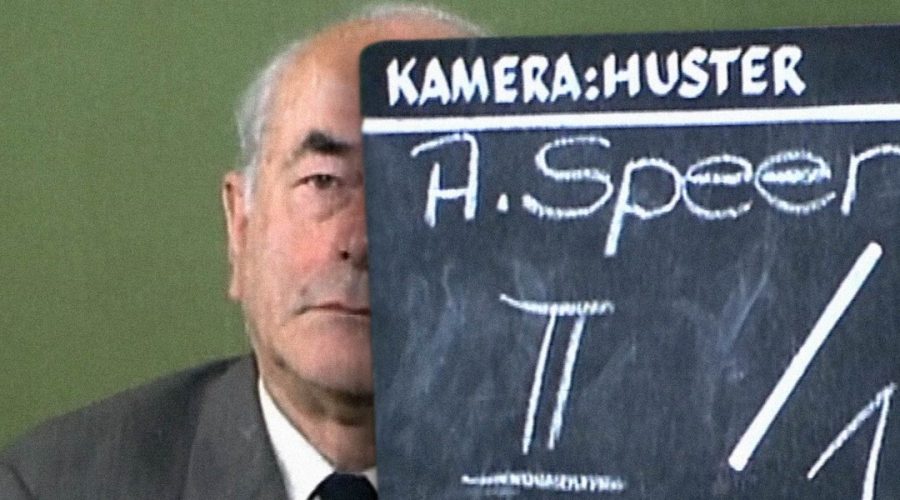 (JTA) — Historical memory, now and forever, is an extraordinarily messy thing. Most prefer to paper over it rather than address it head-on. So it’s not surprising that, when given the chance, a member of Hitler’s inner circle chose to disregard his own culpability in the Nazi regime, in favor of an attempted glamorous Hollywood-style reinvention — all the infamy of his associations, none of the guilt.

The Israeli documentary “Speer Goes to Hollywood,” directed by Vanessa Lapa, traces this attempted 1970s reinvention of Albert Speer, who served as Hitler’s architect and was sentenced during the Nuremburg Trials to 20 years in prison for his role in aiding the Nazi regime — in the process narrowly dodging the death sentences of many of his fellow collaborators.

After his release, Speer — who fancied himself something of a sophisticate — wrote a bestselling memoir offering thrill-seeking readers a lurid inside view of the Third Reich (the book was literally called “Inside The Third Reich”), while painting his own ascent to the Nazis’ inner circle as a 12-year “mistake.” The film largely focuses on his subsequent efforts to adapt the book into a Hollywood movie, which involved convincing screenwriters and directors that he was a sympathetic figure, rather than a perpetrator.

Winner of the 2020 Ophir Award (the Israeli Oscars) for Best Documentary, Lapa’s film takes an unusual approach to Holocaust nonfiction. It focuses not on the facts of what happened, but on the nature of its subject’s self-delusions after the fact. Instead of present-day talking heads, “Speer Goes to Hollywood” is structured around a series of recorded 1972 conversations between Speer and screenwriter Andrew Birkin, who is trying to adapt the book and, in the process, also trying to pick apart the man’s motives — to see if audiences would buy him as a hero.

Lapa supplements these discussions with archival footage of Nazi Germany and Nuremberg, and occasional film clips meant to exaggerate Speer’s state of mind. The result is a heightened unreality — a rush of images overlaid on a writerly brainstorming session that’s also an interrogation of the soul.

It’s a striking approach to the material, even though the gimmick, which keeps hitting the same ironic notes, turns out to be not quite enough to sustain 90 minutes. Witnessing Speer in conversation (via voiceover reenactments), we can see the logical leaps he takes to earn himself the dubious nickname “The Good Nazi.” Time and again he deflects, shifts blame, absolves himself of responsibility.

Of course, he says, he didn’t like the Jews: “They were coming not legally, smuggled in some way,” and many of them were “nouveau riche,” which conjured in him a feeling of distrust. But he never saw the concentration camps, he says — even though their captives frequently were forced to labor on his building projects. OK, maybe he used the forced labor of 12 million prisoners, but he didn’t know they were being severely beaten on the job, and all these accounts from other witnesses attesting to such treatment are either exaggerations, outliers or outright lies. He didn’t steal items from victims of the Nazis himself, but he might have accepted stolen items from other parties… isn’t that better?

All right, fine, Speer confesses later: “Indirectly, I knew from Hitler that he was planning to annihilate the Jewish people. But I had no direct knowledge until 1944.” Was he present at the Wannsee Conference, at any of the meetings where the Final Solution was discussed? Well, he doesn’t know. It must have been wiped from his memory. And anyway, he would never have gone along with mass extermination: “It’s a waste of labor to us.” (Speer, whom witnesses in the film’s archival portions say had to know about the existence of Auschwitz, rejects a proposed scene by Birkin in which his morally conflicted character would look upon the concentration camps themselves, deeming it “too sentimental.”)

Birkin himself, who’s still alive but is never heard from in the present day, reveals his own antisemitism during the course of their conversations: he explains that he’s having difficulty making Speer’s film because “Paramount and the Jewish Brigade” are not happy with it. We get the sense that the two men, when engaged in their intimate conversations, have created their own little oasis of denial, one that stood a chance of being accepted by the wider public in the immediate decades after the Holocaust.

Reality intervenes once Birkin invites his famous director friends Stanley Kubrick and Carol Reed to weigh in on the project; both are alternately incredulous and appalled by his script’s treatment of Speer. Reed, whose “The Third Man” is perhaps the greatest film ever made about postwar Europe, says the architect’s role in the death camps is being “whitewashed” — and Kubrick, certainly no stranger to crafting beloved films around unsympathetic characters, has no desire to go near any story that might absolve the Nazi. Did Hollywood do the morally correct thing for once?

A postscript to the documentary notes that Speer’s memoir did eventually get made into a 1982 TV movie, the year after he died, without Birkin’s involvement; the film starred Rutger Hauer as Speer and Derek Jacobi as Hitler. Hollywood won out in the end. But it’s hard to feel like Speer won, at least. His place in our historical memory — as a true Nazi — is secure.

“Speer Goes to Hollywood” is now playing at the Film Forum in New York, and opens Friday in LA.

—
The post Albert Speer, Hitler’s architect, tried to make a movie about his life. A new Israeli documentary chronicles his exercise in delusion. appeared first on Jewish Telegraphic Agency.