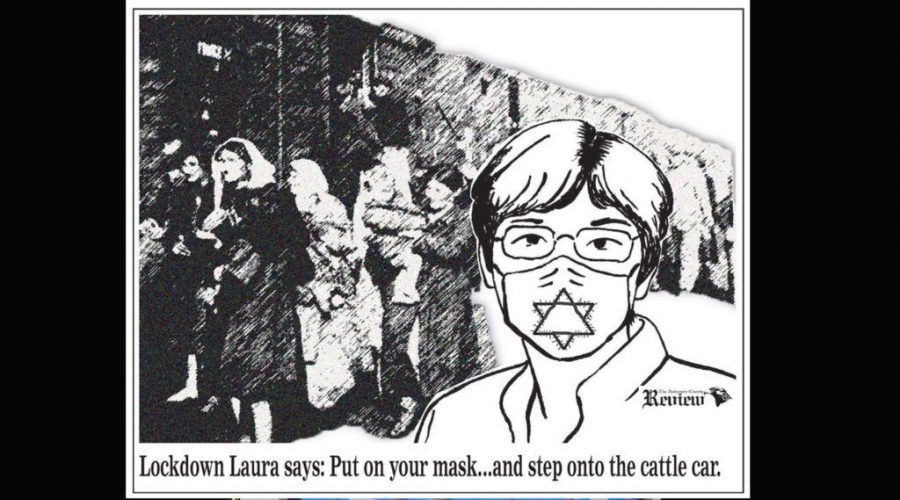 (JTA) — A weekly newspaper in Kansas has removed a political cartoon comparing Gov. Laura Kelly’s order requiring state residents to wear masks to the Nazis ordering Jews to board cattle cars taking them to death camps.

The Republican Party county chairman who owns the Anderson County Review said he created the cartoon, which was posted on the newspaper’s Facebook page Friday, the day that Kelly’s order requiring face masks in public places went into effect.

The cartoon showed the Democratic governor wearing a mask with a Star of David emblazoned on it, and shows Jews getting into cattle cars in the background. “Lockdown Laura says: Put on your mask… and step into the cattle car,” the caption reads.

The cartoon quickly drew criticism, including from Kelly herself. “Mr. Hicks’s decision to publish anti-Semitic imagery is deeply offensive and he should remove it immediately,” the governor said in a statement.

Hicks initially defended the cartoon in written comments that he posted online, where he said he “intended no slight” to Jews or Holocaust survivors but would not apologize. The cartoon would run in the paper’s print edition Tuesday, he wrote.

But after a flurry of critical attention, including an extensive report in the New York Times and a condemning tweet from the CEO of the Anti-Defamation League, Hicks removed the cartoon Sunday afternoon.

“After some heartfelt and educational conversations with Jewish leaders in the U.S. and abroad, I can acknowledge the imagery in my recent editorial cartoon … was deeply hurtful to members of a culture who’ve been dealt plenty of hurt throughout history,” he wrote. “To that end I am removing the cartoon with my apologies to those so directly affected. I appreciate the patience and understanding of those who convinced me to do so.”

Holocaust imagery and rhetoric have been present at protests over stay-at-home orders in several states due to the coronavirus pandemic.