After 9/11, I wrote a Jewish Week headline comparing the US to Israel. Here’s why I regret it. 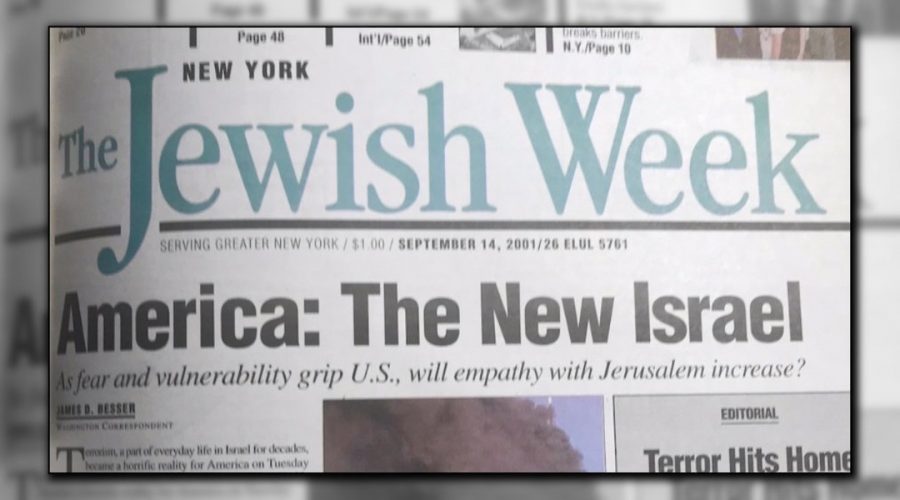 Across the top of the page, in moon landing-size bold type, it read: “America: The New Israel.”

And underneath, in italics: “As fear and vulnerability grip U.S., will empathy with Jerusalem increase?”

How did Israel somehow take center stage in this American tragedy?

I can criticize the headline and those words because I wrote them.

Looking back now, I realize just how misplaced my anger, sadness and fear were in my immediate response to the deadliest terror attack in U.S. history, one that claimed 3,000 innocent lives at the World Trade Center, the Pentagon and in a lonely field in rural Pennsylvania.

Not in my defense but in the interest of establishing the context of my initial reaction — and of many supporters of Israel — allow me to recall the mood of much of the Jewish world, here and in Israel, in early September 2001. It was, to be blunt, one of deep despair.

In Durban, South Africa, international anti-Semitism reached a new high — or low — when the United Nations World Conference Against Racism adopted a resolution labeling Israel an “apartheid, racist” state and accused its government of “genocide and ethnic cleansing.”

The U.S. and Israel withdrew their delegations on determining that they could not remove anti-Israel language from the final declaration of the conference.

But Durban is hardly remembered now, its miserable outcome overtaken by the leap from rhetorical terror to the real thing.

In early September, Israel was one year into the Second Intifada, a uniquely brutal and frightening period when it seemed that Palestinian terrorists were killing Israelis on an almost daily basis.

It’s difficult to convey the sense of fear and outrage that hung over the country like a dark cloud. I returned from a five-day trip to Israel on Sunday, Sept. 9, relieved to have avoided terrorism first-hand. That same day, three Israeli men (one was 19 years old) were killed by a Hamas suicide bomber on a train in Naharia.

Every day, parents feared that when they sent their children off to school in the morning, they might never see them again. The battle was waged not on distant fields but on the streets of Israeli cities, in cafes, hotels, on buses and trains.

During that first year, 110 Israeli men, women and children were killed — almost all of them civilians — in 51 separate incidents of suicide bombings, drive-by shootings, stabbings and stonings across the country. Sixteen teenagers and five other young people were blown up at the Dolphinarium disco in Tel Aviv; 13-year-old Koby Mandell and his 14-year-old friend Yosef Ishran were stoned to death in a cave in Tekoa on Lag B’Omer; a five-month-old baby was stoned in an attack in Shiloh; a 40-year-old woman, five months pregnant, was shot in her car near Karne Shomron; and 15 people were blown away by a suicide bomber one August afternoon in a Sbarro restaurant in downtown Jerusalem.

According to the International Institute for Counter-Terrorism, 1,137 Israelis were killed during the Second Intifada, which lasted five years. Its most common weapon: suicide bombers targeting innocents. Its most lasting impact: convincing a majority of Israelis that making peace with the Palestinians was a dream-turned-nightmare.

The intifada’s impact on Israeli politics is evident two decades later in a country whose citizens have moved increasingly right on the Palestinian issue.

I was back at work on that beautiful Tuesday morning, Sept. 11. After seeing on TV the non-stop clips of a plane smashing into one of the Twin Towers, I looked out the window of my Times Square office and saw and smelled the black clouds in the distance. And then the second plane hit.

I felt sickened and stunned. Not knowing the extent of the tragedy, I already mourned for my fellow Americans. But as we learned more details, I was overly focused on what I saw as the striking parallels between two democracies whose citizens were viciously and unfairly attacked by Arab terrorists. To the perpetrators, the U.S. and Israel were Big Satan and Little Satan.

Particularly galling to me, American officials for months had been calling on Israel to show restraint in its response to the many Palestinian terror attacks, and the media too often made moral equivalence of the attackers and the attacked.

As my colleagues and I tore up the articles planned for that week’s edition and threw ourselves into reporting on the attacks and their profound impact, I wrote an editorial titled “Terror Hits Home,” which stated: “Friends and supporters of Israel could not help but think that this week the United States became Israel,” with American citizens suddenly “learning what it is like to experience fear and vulnerability, to bear the brunt of blind hatred, to have innocent civilians targeted as victims of suicide bombers.

“Will the U.S. government, which pledged to strike back against those who committed these dastardly deeds, now see the folly in its calls on Israel to use restraint in the face of murderous terrorist acts?

“Surely we don’t expect Washington to seek peace talks with the perpetrators, or offer up several states to pacify them, or condemn the cycle of violence” as if there is no difference between the arsonist and the victim of fire.

In a letter to the editor responding to the headline, published a week later, a reader wrote she was appalled that rather than focus on the plight of the victims, “you harangue and berate the United Sates for its sins of omission. How cruel. How arrogant.”

The letter noted that “there is nothing wrong with your front-page articles except for their placement. Horror and outrage should have been your lead.”

Her point was well taken, and still is.

My timing was woefully premature in calling out what I saw as Washington’s hypocrisy — pressuring Israel to ease up in its defense against deadly attacks on civilians as the U.S. was about to launch a “war on terror.” I should have been mourning the victims, damning the perpetrators and praising the heroes — the firefighters who rushed into the chaos rather than escape it, and those brave souls on American Airlines Flight 77 whose struggle with the plane’s hijackers likely saved the U.S. Capitol from a direct hit.

The fact is that the 9/11 attacks did change U.S. policy toward Israel in its own, and ongoing, war on terrorists. It started at the top. “The personal relationship between [President George W.] Bush and [Israeli Prime Minister Ariel] Sharon grew much tighter,” Gideon Sa’ar, then Cabinet Secretary in Sharon’s government, later recalled. “Following the September 11 attacks, Bush finally understood Sharon’s situation as leader of a nation fighting mass terror attacks. He began to identify with him.”

Israel is still condemned by many for using “disproportionate force” in its insistence on doing all it can to protect its citizens from those who would destroy them, and the state. Its leaders prefer the enmity of critics to tears of sympathy from allies.

But America has wavered in its commitment to carry on a war that doesn’t end. After 20 years, our society grew weary of the conflict in Afghanistan, not sure why we were still there. Late in the game we came to recognize the hubris in trying to impose our values — noble as democracy is — on a factional land with its own very different culture.

Still, when the U.S. pulled out so hastily and ineffectively, we were sickened to think of those left behind — including thousands who risked their lives to help our troops. The fate that awaits nearly 40 million Afghans at the hands of a brutal regime is too painful to imagine.

Still, when a suicide bomber at the Kabul airport gates killed 170 Afghans, including 13 courageous young American soldiers, the response in Washington was “we will not forgive, we will not forget, we will hunt you down.”

Those words seem to echo those of President Bush 20 years ago.

In a moving Washington Post opinion piece, Theodore Olsen, the former U.S. solicitor general whose wife was killed on 9/11, notes that in pledging to pursue the terrorist perpetrators in Kabul, “we have come full circle.”

Are we truly prepared to honor the thousands of Americans murdered on 9/11 by stepping up our efforts against the Taliban, ISIS and their fellow haters of Big Satan and Little Satan around the world?

It does not seem likely, when Washington is considering diplomatic alternatives. Only when we do, though, will those victims rest in peace.

—
The post After 9/11, I wrote a Jewish Week headline comparing the US to Israel. Here’s why I regret it. appeared first on Jewish Telegraphic Agency.