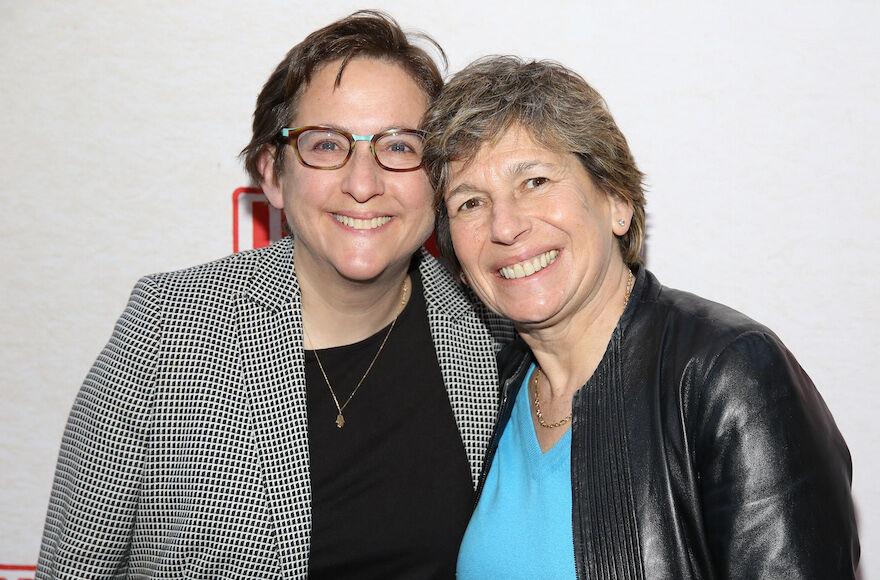 Rabbi Sharon Kleinbaum, left, and Randi Weingarten at the opening night of the Broadway show "Indecent" at The Cort Theatre in New York, April 18, 2017. (Walter McBride/WireImage)

The ad, paid for by the American Liberty Fund and appearing on Facebook, begins: “Are you Jewish? Are you even thinking about voting Democrat? Have you ever heard the phrase ‘never again?’”

The ad then runs through an array of figures it describes as “anti-Semites” who spoke at the Democratic National Convention this summer, two of whom were Jewish: Kleinbaum and Sen. Bernie Sanders. Others on the list include Tamika Mallory, a Black activist who has spoken admirably about Louis Farrakhan, and Minnesota Rep. Ilhan Omar, who has been accused by mainstream Jewish organizations of making statements seen as crossing into anti-Semitism.

“Anti-Israel Rabbi Sharon Kleinbaum and Bernie Sanders were on the program,” the ad says. “She sits on the board of radical NIF, which accuses Israel of war crimes.”

In a tweet on Friday, the ADL said: “The video distributed by Super PAC American Liberty Fund disrespects the memory of the Holocaust and smears a respected rabbi, @Skleinbaum. This is just another shameless attempt to use Jews as a political football.”

Kleinbaum is the rabbi at Congregation Beit Simchat Torah in New York and is known for her advocacy on behalf of LGBTQ and human rights. The New Israel Fund supports civil society programs in Israel and human rights groups. It has been criticized by Israel’s right-wing government, but in the United States it is supported by a number of pro-Israel givers.

The footage accompanying the Kleinbaum accusation is of death camps and Holocaust survivors.  Sanders, the Vermont senator who is the first Jewish candidate to win a major-party nominating contest, had family who died in the Holocaust.

The American Liberty Fund’s website lists four board members, including its chairman, Bob Barr, a former Georgia congressman. None appear to be Jewish.