A T-shirt company tried to reclaim the swastika as a peaceful symbol. It didn’t go so well. 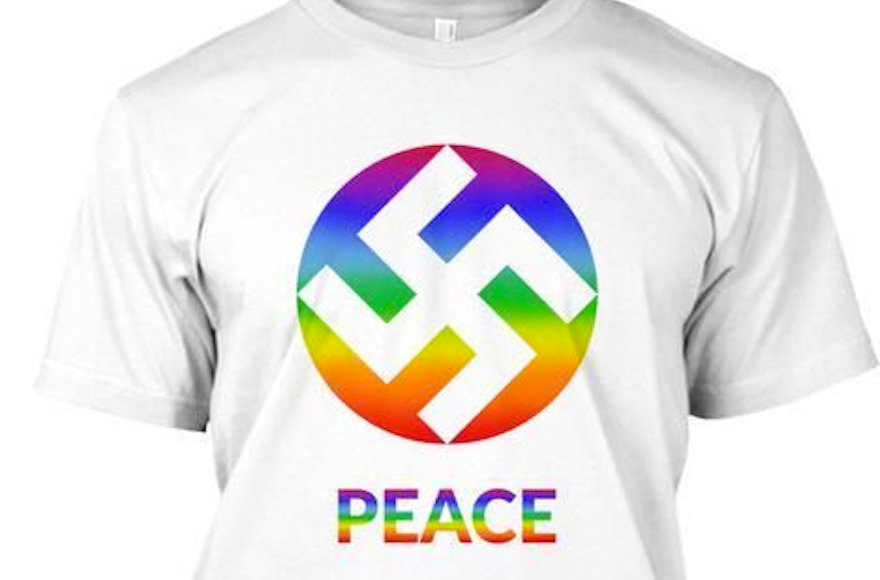 This T-shirt was an attempt to reclaim the swastika as a symbol of peace. (Screenshot from Twitter)

(JTA) — An American company is facing criticism for marketing T-shirts that frame the swastika as a symbol of “love” and “life.”

KA Designs was selling the shirts, which feature white swastikas on a rainbow-colored background with the words “peace” or “zen,” on the U.S.-based clothing company Teespring’s website.

Before the Nazis tainted the swastika by using it as their official symbol during World War II, it had been — and remains — a religious icon in Buddhism, Hinduism and Jainism for thousands of years.

[email protected] You will not escape from the fact that swastika was turned by Nazis into a symbol of racism, hate, antisemitism & mass murder. https://t.co/uejBq5XP2S

The Auschwitz-Birkenau Memorial and Museum and the Simon Wiesenthal Center slammed the shirts.

“I want to say that I am in 100% support of the rebranding of the Swastika as a symbol of love,” Anglin said.

KA Designs released its own statement on the controversy.

“The new meanings given to ‘our Swastika’ wouldn’t make any sense if not based on the previous ones. We want to promote love and peace to remind everyone that mankind can be better that what it currently is and was in the past,” the statement read.

By Monday, Teespring had removed the shirts from its site, The Times of Israel reported.

However, The Jerusalem Post pointed out Monday that Teespring was still offering clothing that referenced or painted Nazis in a positive light, such as shirts that said things such as “Hitler did nothing wrong ever” and “We’re all Hitler now.”

“Teespring’s lack of sensitivity on these issues is repulsive and the company’s obvious goal is to shock people and reap the possible financial rewards, under the guise of their supposed creativity,” Ephraim Zuroff, head of the Simon Wiesenthal Center, told The Jerusalem Post.