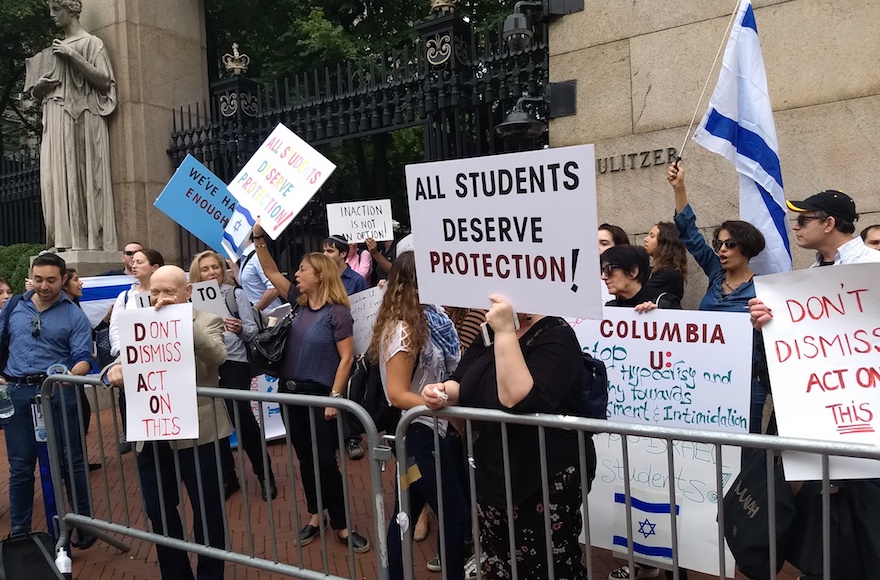 Protesters outside the main gates of Columbia in New York City called on the university administration to do more to protect pro-Israel students, Oct. 4, 2018. (Ben Sales)

NEW YORK (JTA) — The organizers of a rally to support pro-Israel students at Columbia University didn’t want the Jewish Defense League to show up.

And yet there they were, a few demonstrators wearing the extremist right-wing group’s insignia, a clenched fist punching into a yellow Jewish star.

The leader of the group’s New York chapter, Karen Lichtbraun, marched up and down the small police barricade chatting up the other protesters. She said six of her members had come to demonstrate on behalf of the students.

The Oct. 4 rally outside Columbia’s main gates in Upper Manhattan was organized by Students Supporting Israel, a campus group with chapters across the country. It called on the university administration to do more to protect pro-Israel students, whom SSI says are harassed for their views.

But most of the 40 or so demonstrators appeared not to be students. Many were older, mostly middle-aged, protesting on their behalf. The rally was posted on Facebook and was the subject of a news release sent out by Miller Ink, a West Coast public relations firm that represents some pro-Israel groups. In the past, SSI’s Columbia chapter has received support from the Lawfare Project, a legal aid group that supports pro-Israel causes.

One of the older protesters, a non-student who wore a black face mask and identified himself only as “Big Rob,” said he attended the rally in order to encourage pro-Israel students to aggressively confront their adversaries.

Columbia undergraduate Ofir Dayan, daughter of Israel’s consul general in New York, Dani Dayan, told the New York Post that members of Students for Justice in Palestine have harassed her on campus. Dayan said she has been called a “murderer” and “terrorist” by mobs of Palestinian supporters, and that when her father spoke at the university in February, she was handed a flier calling him a “war criminal.”

SSI Columbia’s president, senior Dalia Zahger, told JTA at the rally that she has had similar experiences. Zahger recalled an instance when she and three friends were confronted after an SSI meeting by a group of 50 protesters chanting at them.

“They called me a terrorist in all kinds of different situations,” said the 25-year-old senior, who came to Columbia after serving in the Israeli army. “There were about 50 people there and they started yelling chants at us against Israel. They were there for a different protest, not connected to us. They saw us and decided to scream at us.”

Earlier this year, with the help of Lawfare, SSI filed a complaint with the university administration claiming harassment of pro-Israel students by anti-Zionist groups. The university, according to Zahger, has repeatedly dismissed the complaint.

Despite that, only a handful of students showed up at the rally. Zahger and a few older attendees claimed that was because students were too scared to out themselves as pro-Israel, they were unaware of how bad things were or people discount Jewish claims of discrimination.

“If there would be any other minority treated the way Jewish students are being treated here, you would have thousands of people here standing with them,” said protester Rabbi Elchanan Poupko, the president of Eitan, a nonprofit supporting American Israelis. “When it comes to Israel and Jews, unfortunately, people don’t feel that the same safe spaces and support are required.”

But other large Jewish groups on campus also stayed away from the protest. The campus Hillel’s leadership did not respond to requests for comments, and Aryeh, a large pro-Israel group at Columbia, declined to endorse the rally or encourage its members to attend. The group’s president, Adele Stolovitz, was reluctant to comment on SSI, but told JTA that her group prefers to engage students in pro-Israel activism rather than confronting the administration.

“Aryeh had no official part in that protest at all,” she said. “We are not currently petitioning the administration in any way. Most of our outreach is on a personal basis, and we like to engage the students more than the administration.”

Although SSI tends to be more provocative — in 2016, the group inflated a 12-foot Pinocchio doll on campus to call out what it said were lies being propagated by anti-Israel students — it was uncomfortable with the JDL presence at its rally. The JDL was founded in the late 1960s by Rabbi Meir Kahane, who advocated violence in response to anti-Semitism. The FBI labeled it a terror group.

Today, the JDL, which has a small New York chapter, frequently protests on behalf of right-wing pro-Israel causes.

Following the rally, SSI published a statement condemning the JDL and clarifying that it had asked its members to leave. It said there were three JDL members at the rally.

“We apologize for any distress the three individuals caused,” the statement said. “We did not intend on allowing such an extreme group of individuals to attend. Again, we condemn JDL and what they stand for on the strongest possible terms.”

But at the rally, Lichtbraun said she had no qualms about protesting on behalf of students — even if there weren’t that many students there.

“Most of the pro-Israel groups have not taken to the street, have not organized a protest,” she said. “They’ve stayed in their safe classroom.”