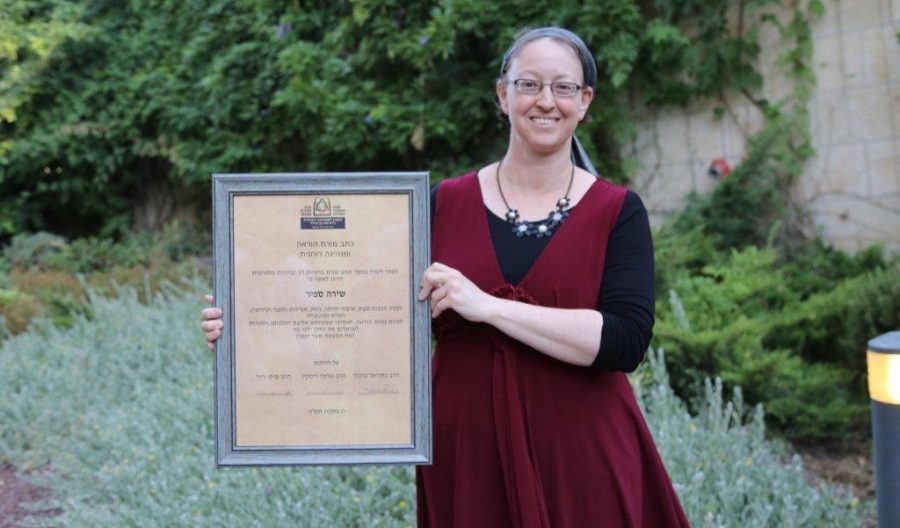 Shira Sapir receives her certification as "morat hora'ah" and spiritual leader from Ohr Torah Stone during a ceremony in Jerusalem, July 5, 2020. (Gershon Ellinson)

The certification of Rabbanit Shira Sapir by Ohr Torah Stone comes in the wake of the Israeli attorney general’s announcement in late June that women scholars in Israel will receive the same benefits as men who pass the Chief Rabbinate’s qualification exams, which are not open to women.

In response to a lawsuit, the attorney general ordered the establishment of accreditation exams for women scholars that will put them on equal footing with men who have passed the Chief Rabbinate’s exams.

Sapir was certified as a “morat hora’ah,” or a teacher authorized to provide direction in matters of Jewish law, after completing a five-year course of studies in Ohr Torah Stone’s Susi Bradfield Women’s Institute of Halakhic Leadership. She is the ninth woman to finish her studies and pass exams in subjects including Shabbat, kashrut and family purity. She also was the first woman to take an additional exam in the laws of conversion.

At the July 5 ceremony in Jerusalem, Sapir said that the study of Torah has brought her closer to her heritage and observance.

“The privilege of women in our generation to be able to spend our days on the benches of the beit midrash [study hall] and take part in the ongoing Torah discourse is a central part of the redemption process,” she said.

Rabbi Kenneth Brander, president and rosh yeshiva of Ohr Torah Stone, said “We’ve shattered the glass ceiling, but in order to tread on it we still have a lot to accomplish.”