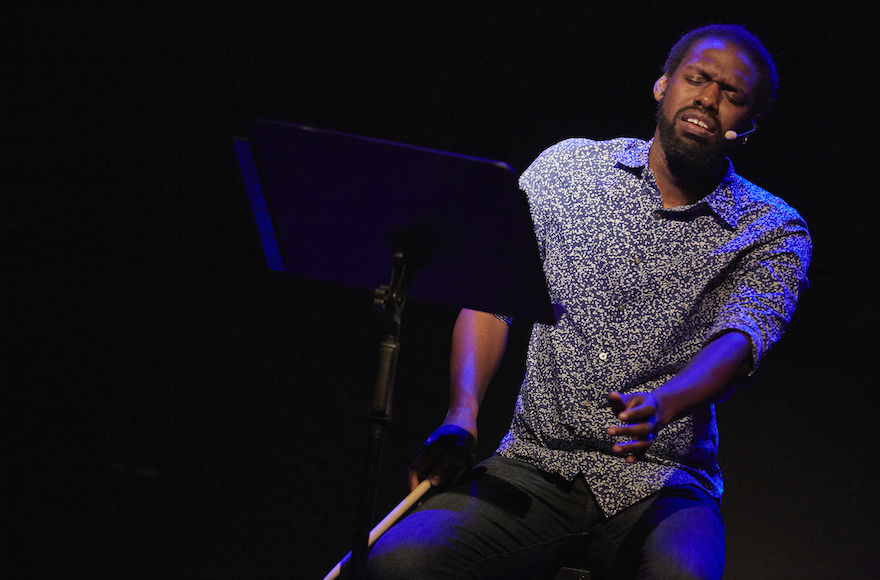 Josefin Dolsten
(JTA) — Anthony Mordechai Tzvi Russell has performed Yiddish music around the world. He is part of a musical duo that creates new interpretations of classic Yiddish songs. In 2017, he even won the Yiddish version of “American Idol.”

Still, the singer gets one request consistently that has nothing to do with Yiddish or klezmer music: to perform traditionally African-American music.

“I always got a little defensive about that because if I’m going to literally perform my blackness for an audience, I want it to be on my terms. I don’t want the terms dictated to me,” the 37-year-old former opera singer, who is black and Jewish, told JTA.

In “Convergence,” Russell aims to do just that, melding Jewish songs, mostly in Yiddish, with traditional African-American tunes. The album, released last week, is a collaboration between Russell and the klezmer band Veretski Pass.

“The whole ethos of the project, at least for me was, if there was a historic African-American Jewish music, if that was a real thing, what would it sound like?” he said in a phone interview Monday.

An example of how he imagines that musical culture can be heard on “Rosie,” a work song written by African-American prisoners at a Mississippi State Penitentiary work camp in the 1940s.

Eventually it bridges into the sorrowful instrumental part from “Es Iz Shoyn Shpet” (It is Already Late), a Yiddish song meant for newlyweds. The sorrowful melodies are mixed together skillfully aided by Russell’s smooth bass voice.

Toward the end of the track, the voice of a newscaster is heard announcing the high incarceration rate of black men in the U.S. today, reminding the listener of slavery’s legacy.

Russell was inspired to write the track after the news broke that George Zimmerman, a neighborhood watch coordinator, was acquitted of charges in the shooting death of Trayvon Martin, an unnarmed black teenager.

Russell said the two musical traditions were a natural fit. One thing that helped, he said, is that many Jewish and African-American songs are written in pentatonic scale, with five notes per octave.

The two traditions have blended together well in his life, too. Russell, who grew up in a Christian family, said his childhood Bible studies helped him on his journey to becoming Jewish.

“I have a very strong connection to narratives of the Bible, the Jewish scriptures, and I think this informed my decision to become Jewish because I was familiar with so many of the important narratives that make up Judaism,” he said.

The couple live in Maynard, Massachusetts, a suburb about 22 miles west of Boston, near the synagogue where Rothbaum works, Congregation Beth Elohim in Acton.

After graduating from college, Russell worked as an opera singer for more than a decade, but never got his big break. Rothbaum suggested that he explore Jewish music, but Russell dismissed the idea. But that initial response didn’t last long, and in 2011 Russell started teaching himself to sing in Yiddish.

He has traveled around the world performing Yiddish songs at cultural festivals, synagogues and academic events. He is also a member of the musical duo Tsvey Brider, in which he and musician Dmitri Gaskin create new music in Yiddish, including in the styles of cabaret, disco and pop.

A year after starting to pursue Yiddish music, Russell decided to combine it with African-American music. He juxtaposed the Yiddish song “Der Gemore Nign,” in which a young homesick boy recites Talmud, with the African-American spiritual “Sometimes I Feel Like a Motherless Child.”

“My idea initially was to have it as a dialogue,” he said. “Here are these two children — one black, one Ashkenazi Jewish in the world of the 19th century — both singing about their loneliness and alienation from their families.”

Russell performed the song at events, and it was well-received. Two years later he performed it with Veretski Pass, a klezmer instrumental trio, and the collaboration that eventually led to “Convergence” was born.

Russell said the collaboration allows him to honor all the parts that make up his identity.

“But I still wanted to be very much myself as a black man, as somebody who is responsive to black culture and black history, that’s somebody who I wanted to be while I was also being Jewish. So it’s almost like the project as an outgrowth of that need to stay true to myself while making that very conscious decision to be Jewish.”