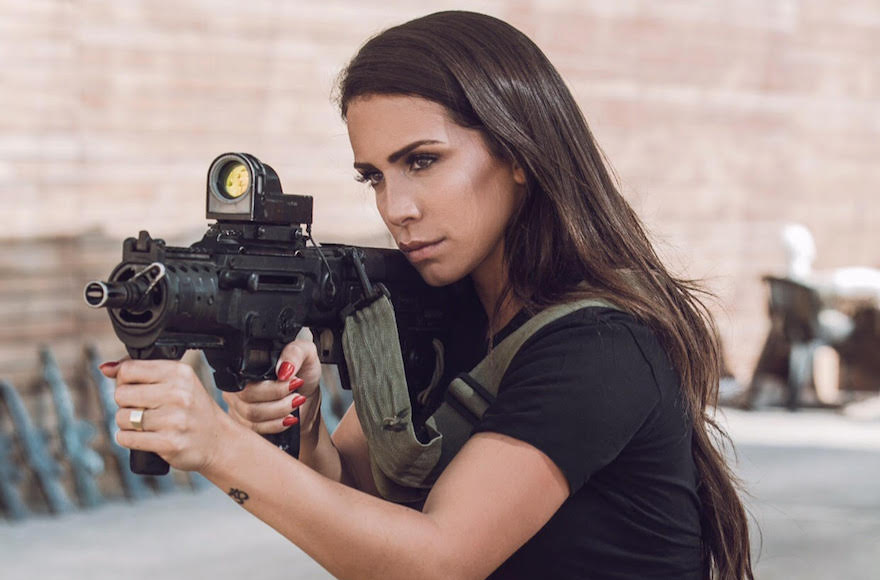 Orin Julie posing with an assault rifle at a shooting range in the West Bank. (Omer Shapira/Courtesy of Say Talent)

TEL AVIV (JTA) — When it comes to women posing with firearms, the United States is fully loaded. Lithe models can be found showing off weapons at gun shows, in rifle magazines and on dedicated social media pages.

Orin Julie may look like just another “gun bunny,” as such models are sometimes called, but she is the industry’s secret weapon. She is a former Israeli combat soldier who is trained to discharge the weapons she poses with.

“I don’t stand around in swimwear,” she said in an interview at the office of her Tel Aviv modeling agency. “I know how to hold guns, how to shoot, how to do combat stuff — and Americans appreciate that.”

Julie’s military background has helped her stand out as a weapons model and win a following of legions of American gun enthusiasts. But the reception to her modeling also demonstrates the vast differences between the the gun cultures of the United States and her native Israel.

At home many see her as a woman who served in a combat unit, as an embodiment of female empowerment. To her fans in the United States, she is a symbol of the very American mixture of constitutional rights, gun ownership and a culture in which “sexy” can refer both to a beautiful young woman and the assault weapon she cradles.

Two years into her career, Julie, 23, has modeled for a half dozen Israeli and American companies that sell firearms and related products. Last year, she represented Israel’s Gilboa Rifles at the world’s biggest gun show in Las Vegas.

A video about her by Israel’s Kan public broadcaster has been viewed by more than 800,000 people since it was posted on Facebook earlier this month.

Meanwhile, Julie’s Instagram account has racked up 145,000 followers, many who gush over photos of her in lipstick and crop tops bearing the latest arms, from petite handguns to massive assault rifles.

Julie said her love of guns and her career modeling them emerged from her Zionist upbringing. Growing up in the central Israeli town of Kiryat Ono, she recalled being a “very spoiled girl.” But in high school, as she began thinking ahead to her mandatory military service, Julie quietly resolved to become a combat solider.

“No one thought I could do it,” she said. “But I really love Israel, and I wanted to show I could do more and be more.”

The army initially turned Julie down for combat, citing her asthma, but with the backing of a powerful female commander, she managed to start her second year of service in the Israel Defense Forces’ new mixed-gender search and rescue brigade. She said she was the first woman to serve as the communications sergeant for a brigade commander. 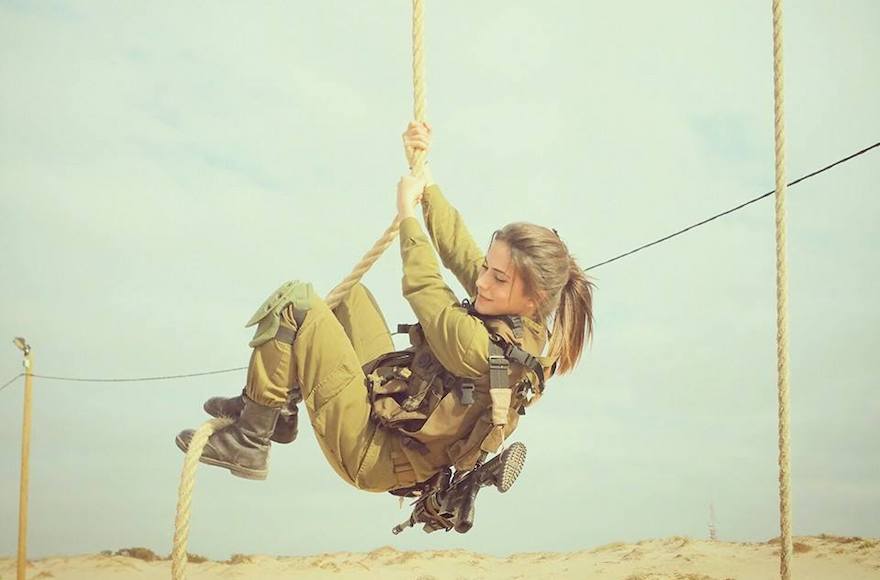 Orin Julie during her combat training in the Israel Defense Forces. (Courtesy of Orin Julie)

In 2015, near the end of her three years of service, photos Julie posted on Instagram of herself in training drew the attention of the Israeli military equipment retailer Zahal, which led to contracts with local makers of firearms and gun accessories and a West Bank shooting range. She has also modeled for Ideal Conceal, an American startup that hopes to market cellphone-sized handguns to women with the slogan “Carry with confidence, conceal in style.”

Julie publicly embraces her Israeli identity and her combat experience, which she said her employers encourage. On Instagram, she posts throwback photos of her time in the army, writes in Hebrew and wishes her followers “Shabbat shalom.” Judging by the response on her Instagram account, it works for her fans.

Hebrew and English comments like “I just love Israeli girls” and “ok I’m ready to join the IDF” are common. However, so are those calling her a “baby killer” or otherwise attacking Israel. 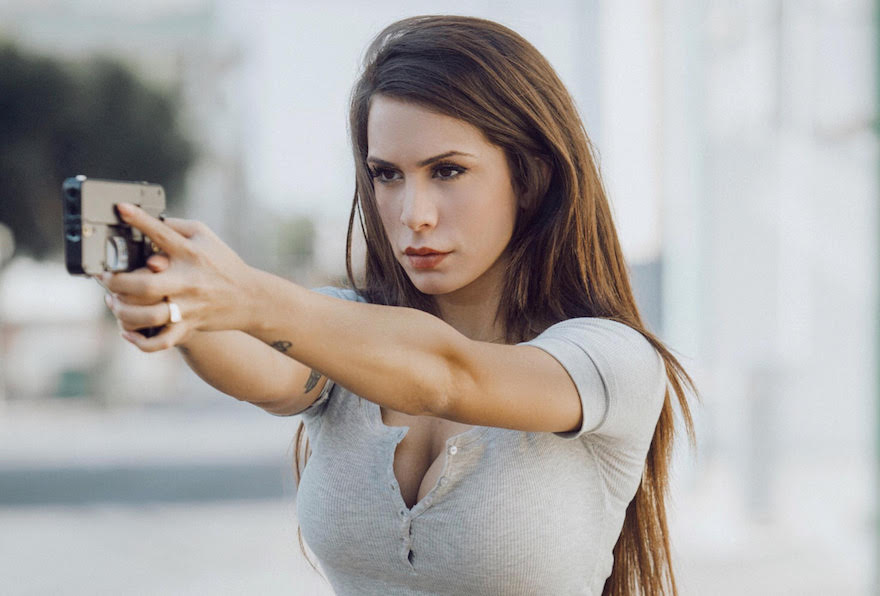 While Julie’s devotees can agree that her nationality and combat experience are sexy, the ways the Israelis and Americans respond to her are in other ways distinctive.

In general, Israelis pay little attention to the guns Julie poses with. After all, most of them handle weapons in the army and are barred from owning them by their country’s strict laws. The very idea of a weapons model is foreign here; Julie said she is the first.

More salient to Israelis is Julie’s combat service as a woman. The army’s promotion of female fighters has triggered controversy of late, and Julie said men, including her former commanders, send her supportive messages and women stop her on the street to thank her.

“Girls say I inspired them to go for a combat position or just to do what they love,” she said.

As for her American fans, many respond enthusiastically to the guns Julie helps sell in their country’s large market — one that many other Americans see as underregulated. Her Instagram followers in the United States, whom she described as “crazy about guns,” often comment on specific gun models she uses.

Last August, she posted a photo of herself holding an M60 machine gun nearly as big she is. Comments from Americans included, “I love this gun. I was an M60 gunner for three years”; “M60 Machine Gun…!!! Nam memories!”; and “War in vietnam, m60 7.62 mm nato.” 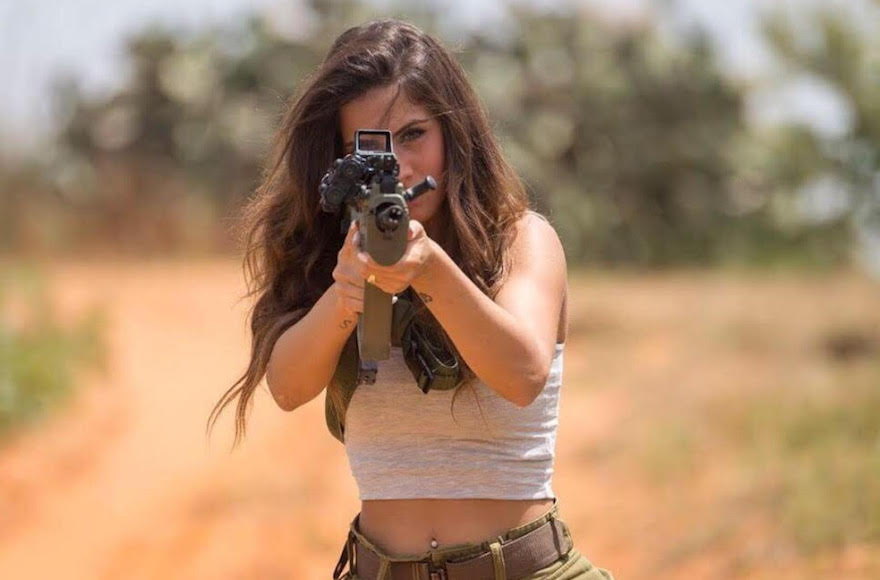 Julie, speaking to JTA just days after a gunman killed 58 people at an outdoor music festival in Las Vegas, declined to speak on the record about her views of gun laws in the United States or modeling for companies that do business in the country. She said only that she believes in the right to self defense but is saddened whenever she hears of an innocent victim of American gun violence.

“I’m really sorry about what happened in Vegas,” she said. “I hope the government will find a way to take care of it.”

Ultimately, Julie said, she worries little about how she is perceived. Modeling guns is about using her talents to achieve her ambitions, she said, which include completing her degree in personal training and launching a successful acting career.

“I was blessed with certain skills, and I all want is to be the best version of myself,” she said. “I love the adrenaline of holding a gun. It makes me feel powerful and in control.”