A destination b’nai mitzvah industry is taking shape on Maui 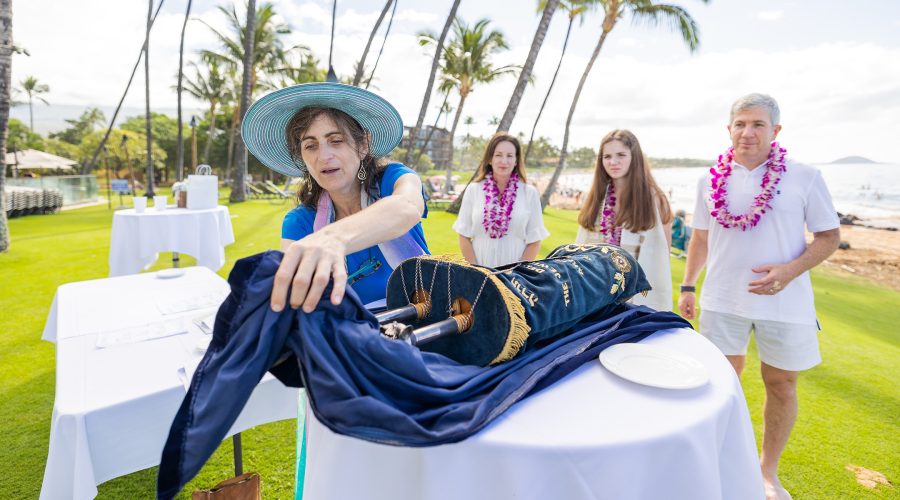 (JTA) — Feeling the sand between her toes was Teva Goldstein’s favorite part of her December 2021 bat mitzvah on the island of Maui. She and her family all wore white, accessorized with purple leis.

The beach in Hawaii was nearly 4,000 miles from her home in Dallas, another thousand miles from where she had lived for most of her life in Maryland. Yet her family had chosen it to mark her bat mitzvah, the moment when she would symbolically assume adulthood among the Jewish people.

The path to the beach was long and winding due to the COVID-19 pandemic, pitted with setbacks and anxiety. But it had brought Teva and her family in touch with a woman who is turning Hawaii into a bar and bat mitzvah destination. Finding Sandra Razieli helped them finalize plans that had been thrown into turmoil twice by the pandemic.

Razieli moved to Maui in 2017, thinking that her skills as a yoga teacher would be how she made her living. She assumed that the b’nai mitzvah tutoring she’d done for two decades for families in the San Francisco Bay Area would be of little use on the island, where one unaffiliated synagogue and one Chabad serve the small number of local Jews.

“I didn’t know I was going to continue doing Jewish stuff when I got here,” Razieli told the Jewish Telegraphic Agency. 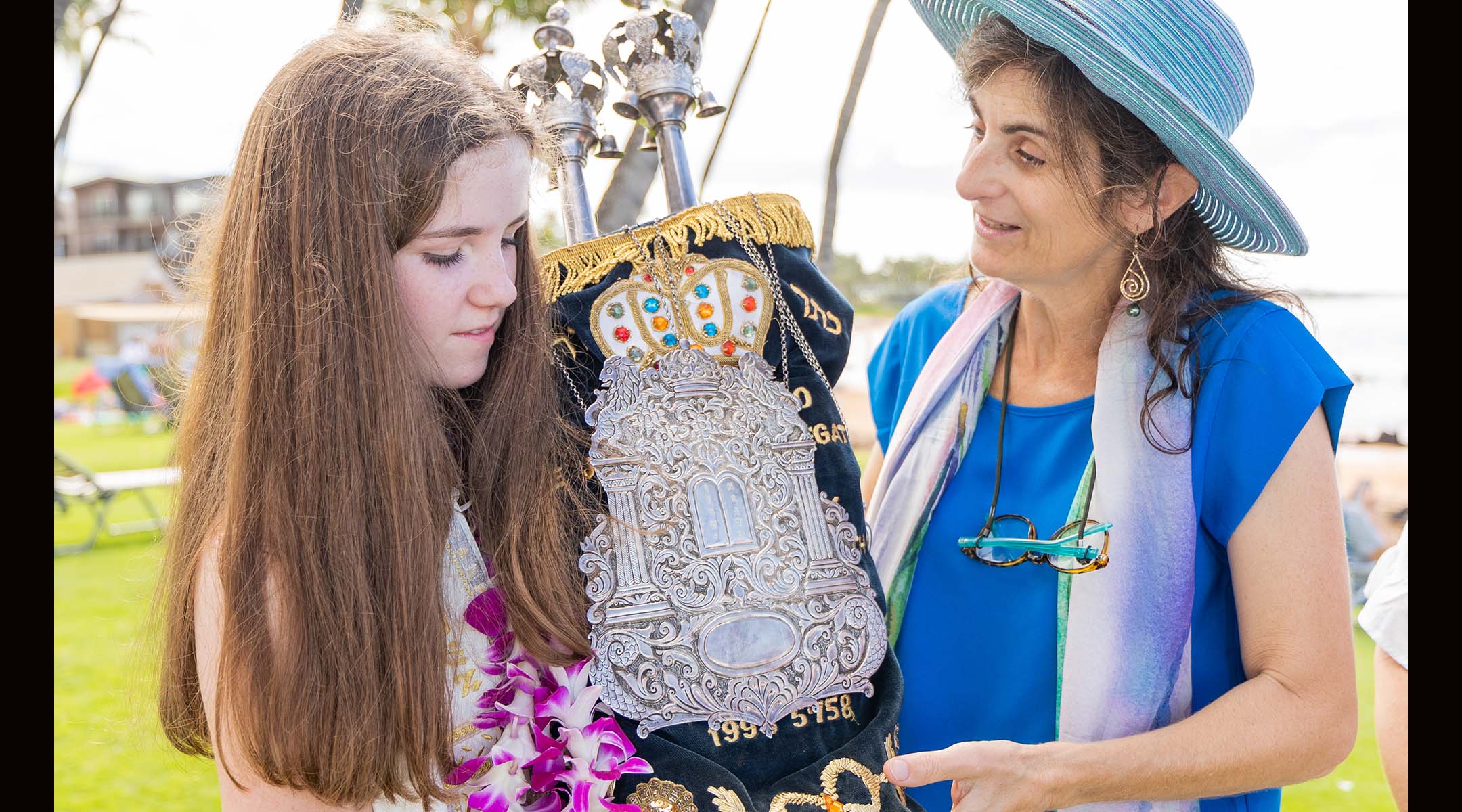 She was wrong. Not only did Razieli start picking up work through Beit Shalom: The Jewish Congregation of Maui, which recently launched a b’nai mitzvah program, but she also has begun carving out a niche serving mainlanders who choose Hawaii for destination bar and bat mitzvahs.

So far, she’s officiated at four b’nai mitzvah, including Teva Goldstein’s. If Beit Shalom gets a call from someone considering traveling to Maui for a lifecycle event, the synagogue sends the caller Razieli’s way.

Razieli said the decision to lead beachfront b’nai mitzvahs wasn’t totally natural, given her longtime experience working with families through a synagogue back in California, Kehilla Community Synagogue in Piedmont.

“At first, it was challenging for me to think of officiating b’nai mitzvah away from community, since the whole point of it is to say ‘I’m stepping into my community,” she said. “But some don’t have that community at home. I want to provide an experience where they feel honored and welcome.”

Razieli was recently ordained by the Jewish Spiritual Leaders Institute, a short-term online program that confers the title “rabbi” on its graduates. Many do not consider rabbinical ordination from the program legitimate. Razieli, who led countless Jewish rituals in the Bay Area without ordination, said families coming to her just want a knowledgeable ritual leader.

Razieli meets with families virtually, then makes custom prayer books for each event, asking families for their preferred language for God, for example.

Then, she borrows the Torah from Beit Shalom for the beachfront ceremonies. She recommends the 5 Palms restaurant as an obvious location: Already a popular wedding venue, its owner Simon Vodjani, is active in Maui’s Jewish community (he has hosted Yom Kippur services there for Chabad before, as well).

Razieli said the sight of a Torah on the beach can definitely attract attention. “People are sunbathing and will see the Torah here,” she said — and while that might seem discordant for some, she said, with such a stunning backdrop, it’s hard not to be in awe.

“In some ways, it’s much more spiritual than being in a space with fluorescent lights,” she said.

That was the case for Teva Goldstein’s family, who ended up on Maui after canceling multiple other plans. First, a destination bat mitzvah in Prague was canceled because of the pandemic’s beginning; a rescheduled ceremony in Israel, where her older brother celebrated his bar mitzvah, was scrambled because of the omicron variant.

During the first year of the pandemic, Teva and her family made the local news for making and posting inspirational signs around their Dallas neighborhood, like “We are in this together.”

But two years after she was first supposed to signal her entrance to Jewish adulthood with a bat mitzvah, Goldberg, now 15, was beginning to feel her resolve weaken.

“After learning two different Torah portions, and with everything still virtual, she didn’t even want to have one,” said Teva’s mother, Abby Goldstein. “That she didn’t feel much connection to it made us sad, so we decided it’s going to be low-key and easy for her.”

But Teva came up with one last idea, one that connected with her passion for the environment — perhaps preordained by her name, which means “nature” in Hebrew.

With very little time to prepare, Goldstein was not interested in learning yet a third Torah portion, so she recited the blessings over the Torah rather than read from it. She and Razieli met a few times over Zoom before the trip to prepare.

“It was a really good experience. I liked how Sandra customized the service for me,” Teva said.

And the environment — far from what the family had originally anticipated — proved to be an essential element of the religious experience, Abby Goldstein said.

“With such beauty, we were seeing God all around us,” she said. “At the same time, I felt such gratitude that even amidst the turmoil of the past two years, that we saw our daughter do this and make this connection with God. It was very meaningful for me to know that we didn’t give up, amongst everything, and I think it was for her as well.”

This story is part of JTA’s Mazels series, which profiles unique and noteworthy Jewish life events from births to b’nai mitzvah to weddings and everything in between.

Mazels: Tell Us About Your Life Milestones

Have you or a loved one celebrated a Jewish life-cycle event recently? We’re thinking bar/bat mitzvahs, weddings, conversions, and so on. We want to hear about them!

Share some details with us below, and we may reach out for more information.

What is your name?(Required)
Email(Required)

What type of milestone are you sharing?(Required)

—
The post A destination b’nai mitzvah industry is taking shape on Maui, as this teen learned after COVID scrambled her original plans appeared first on Jewish Telegraphic Agency.