A CDC study finds that camp amid COVID-19 can be safe. Its evidence comes from Camp Ramah. 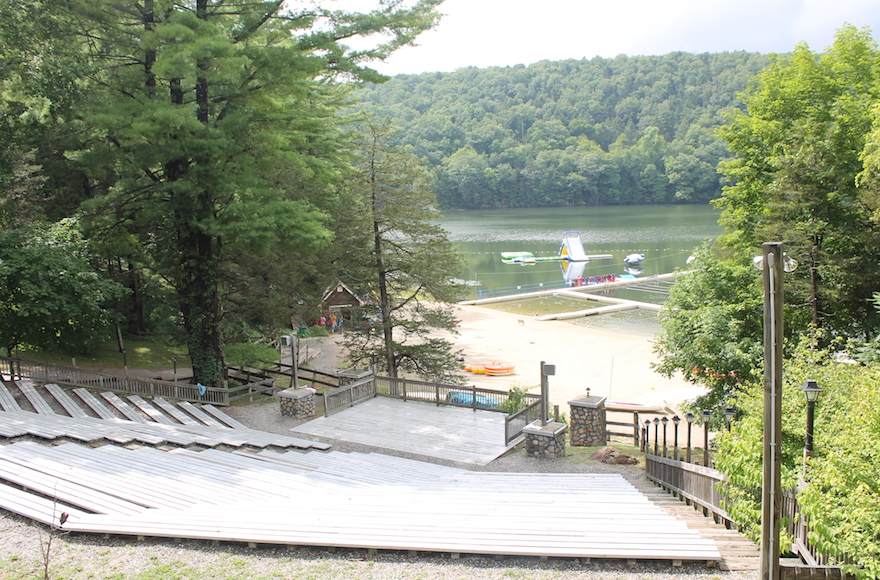 The waterfront at Camp Ramah in the Berkshires includes a wide variety of inflatable toys and surf kayaks. (Uriel Heilman)

(JTA) — The Centers for Disease Control has published a study conducted by the medical committee of the Camp Ramah network, highlighting the Jewish camps’ highly successful safety measures for avoiding the spread of COVID-19 this past summer.

Between June and August, nine Ramah campers tested positive for the virus, out of a total of over 7,000 children and teenagers at nine out of the Conservative movement-affiliated system’s 10 camps, the study shows.

“Three of the nine cases occurred in vaccinated staff members and six in unvaccinated campers aged 8–14 years. The three staff member cases were identified before the arrival of campers,” the study summary reads. COVID-19 vaccines currently are not offered to children under 12.

In the words of the 10 Ramah authors, several of them licensed physicians, the study’s findings “highlight important guiding principles for school and youth-based COVID-19 prevention protocols.” The authors emphasize that a combination of mandatory testing before attending camp, repeated testing while at camp, frequent hand washing and the establishment of “pods,” or isolated groups of campers, led to a successful summer.

Campers in a specific cabin became a pod, and were allowed to interact freely without masks or other restrictions. After rounds of testing, multiple pods merged over time. Three camps achieved camp-wide “pod expansion.”

After shutting down completely like most other Jewish and non-Jewish overnight camps during the height of the pandemic in 2020, Ramah restarted this summer.

Rabbi Mitchell Cohen, national director of the National Ramah Commission, described the process — which included rotating groups of campers into prayer sessions, and putting up plastic dividers in dining halls — to the Jewish Telegraphic Agency in April, calling it “absolutely exhausting but incredibly exhilarating.”

—
The post A CDC study finds that camp amid COVID-19 can be safe. Its evidence comes from Camp Ramah. appeared first on Jewish Telegraphic Agency.