8 reasons to visit Israel in the fall 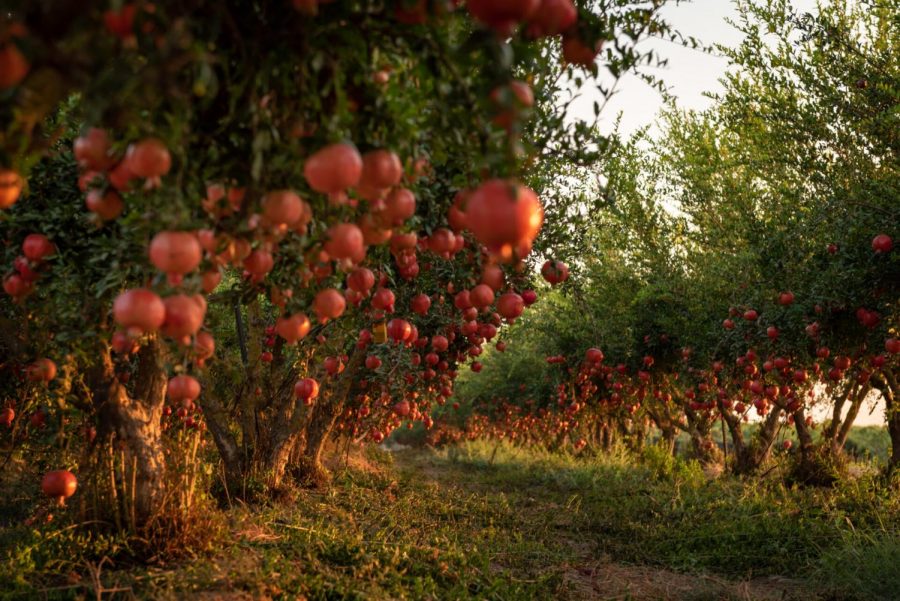 Across the world, people are bemoaning the end of summer and the beginning of a long, dark winter. In Israel, however, a loud collective sigh of relief can be heard as the blistering heat waves that have been tormenting us finally make way for cooler, pleasanter weather that doesn’t require us to think twice before leaving our AC-ed house.

And it’s not only the (slightly) dropping temperatures that make us love Israel in the fall. Scroll down to find out more.

It’s no coincidence that apples and pomegranates are the fruit that adorn High Holiday tables, for they become ripe for picking exactly around the time of the Jewish New Year.

Pomegranates, which originated in Iran, migrated to Israel some 4,000 years ago and have become so ingrained in local culture that they are one of the seven agricultural products listed in the Bible as special products of the Land of Israel. Some species of pomegranates grow earlier and later in the year, but in the minds of most Israelis, the gorgeous fruit is firmly associated with the beginning of fall.

Apples too have been growing in the Land of Israel for thousands of years, but the more modern species we’re familiar with were planted here at the turn of the 20th century. Apples are grown in Israel’s colder regions in the Upper Galilee and Golan Heights, where you can find orchards of Delicious, Granny Smith and Anna apples and loads of Israelis enjoying a day’s picking.

It’s time for a hike 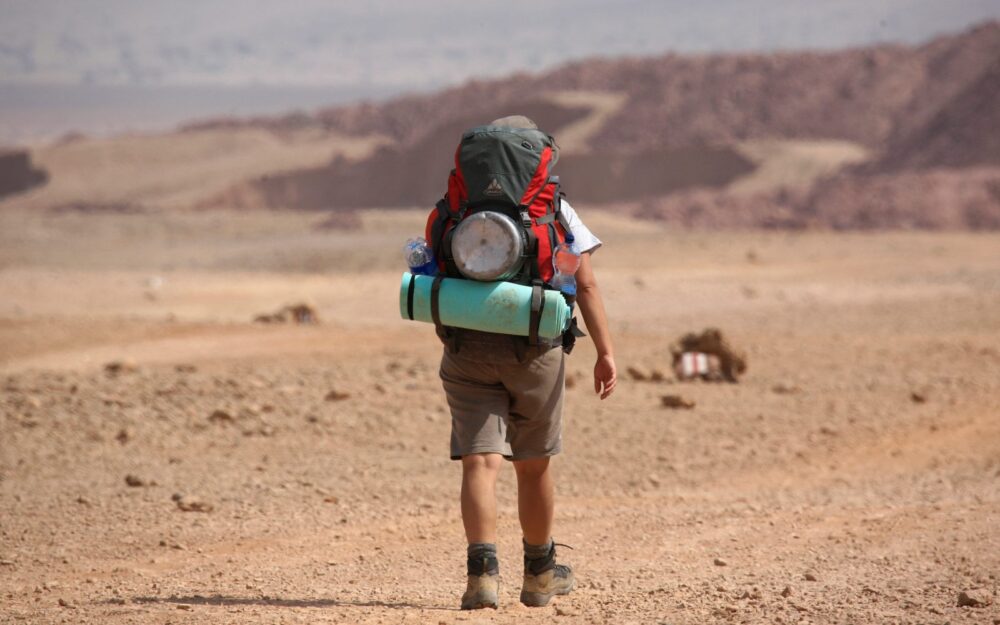 A man hikes in the Timna Valley in the Israeli desert. Photo by Nati Shohat/Flash90

The combination of slightly cooler weather and the prolonged vacation over the Jewish High Holidays makes this the ultimate season for hiking.

Previously unbearably hot hikes in the desert suddenly become much more attractive, as do formerly humid trips on Israel’s coastline.  The Jerusalem area also boasts some wonderful trails, or you could opt for a moonlit hike for a more unusual experience.

An Israeli woman walks on Dizengoff Street during the first rain. November 2020. Photo by Miriam Alster/Flash90

In Israel, the first rains of the season are a such a celebratory event that not only do they get a special mention on the news, but they even have their very own word to describe them – yoreh. This level of excitement probably has to do with the unique climate conditions of the Eastern Mediterranean. There’s virtually no rainfall outside of winter, making the return of those big fat drops a very happy occasion. There’s also a word for the very last rain of the season – malkosh. 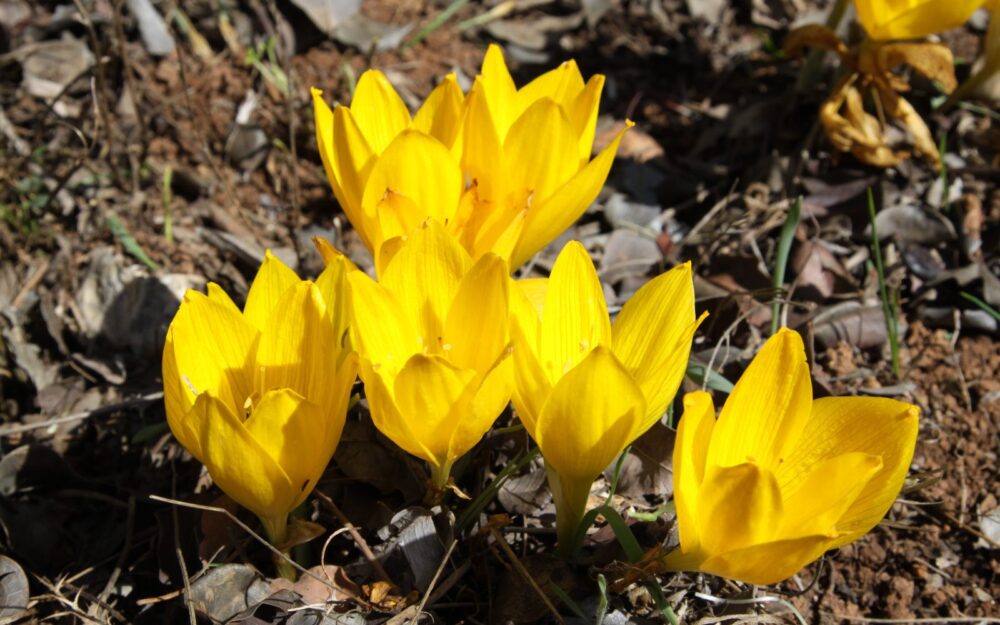 Bright yellow Sternbergia is one of fall’s first flowers. Photo by Gershon Elinson/Flash90

Blooming flowers are most often associated with spring, but the ones that shoot out of the ground after the first rainfall in Israel are particularly beautiful. 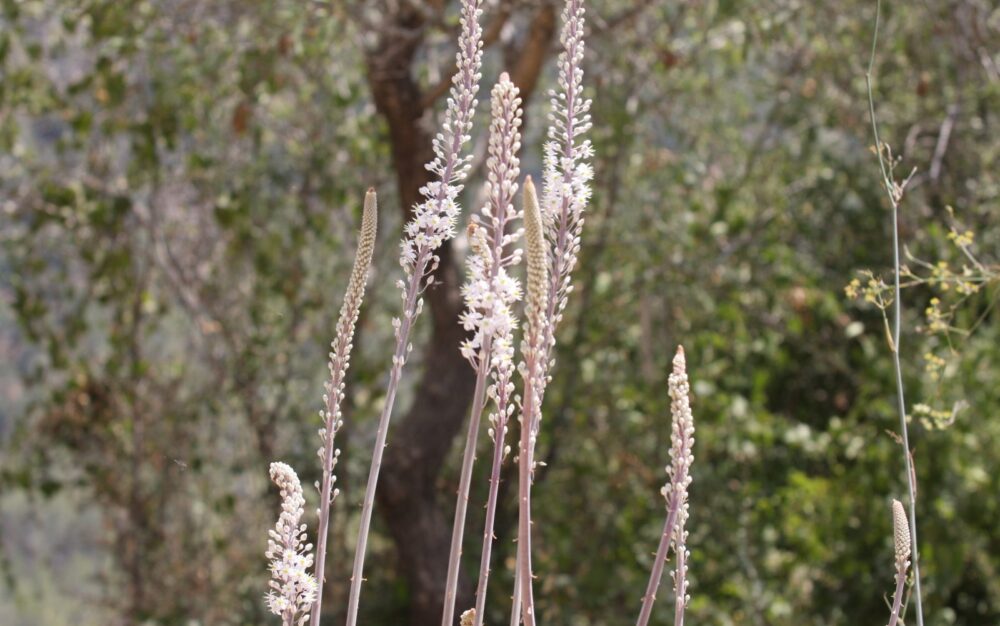 Squills are the official harbingers of fall in Israel. Photo by Yossi Zamir/Flash 90

These include the autumn crocus, bright yellow Sternbergia and the ultimate harbinger of the Israeli fall, the squill (Drimia maritima), to which national poet Naomi Shemer dedicated her famous song, Kemo Hatzav. 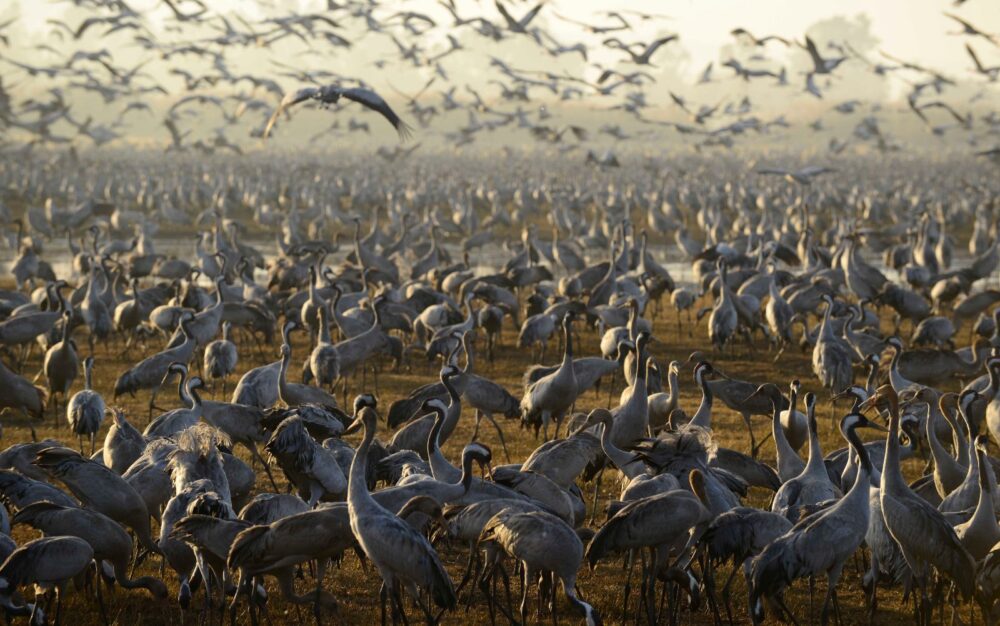 Thousands of cranes stop to rest on their way from Europe to Africa at the Hula Valley in northern Israel. Photo by Tomer Neuberg/Flash90

Around half a billion birds pass through Israel during their migration from Europe to Africa ahead of winter, making fall the perfect season to pack a pair of binoculars and indulge in a bit of birdwatching.

Migrating birds include ducks, herons, cranes and storks, and the most famous place to spot them is the Hula Lake up north. And yet, it’s totally possible to indulge in quality birdwatching across the country, even in urban Jerusalem, especially in the early mornings and early evenings.

Sunsets in September and rainbows in October 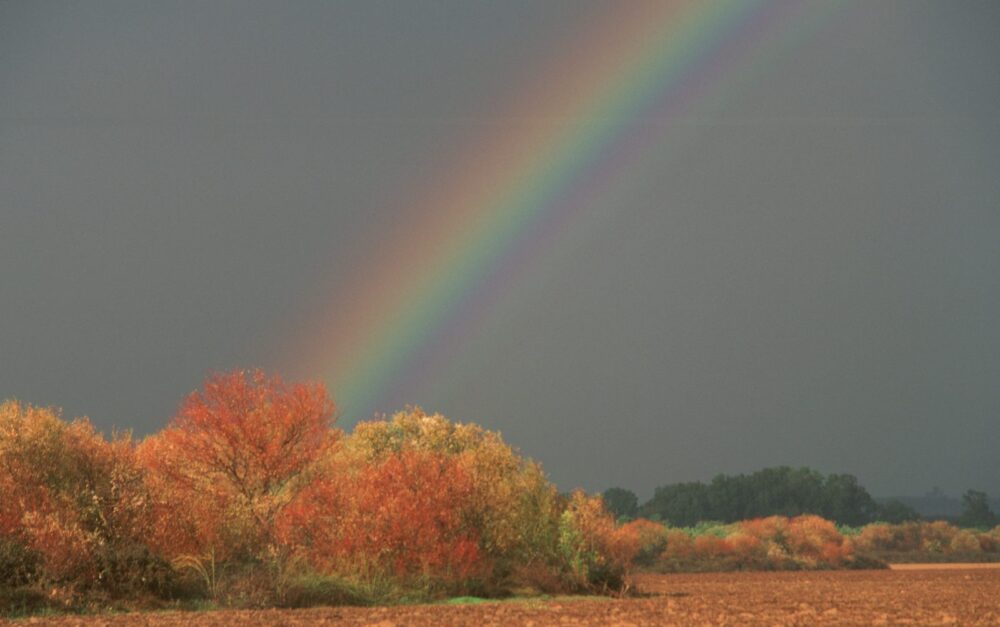 A rainbow stands behind autumn trees in the Tel Dan Nature Reserve. Photo by Doron Horowitz/Flash90

September and October are the best months for two of nature’s most stunning phenomena – sunsets and rainbows, respectively.

While sunsets in Israel are breathtaking all year round, it’s a well-known secret that they are even more amazing in the month of September. As for rainbows, the combination of sun and sporadic rain that takes place in October (fine, also in November) makes it prime season. Definitely something to look forward to.

You can part with your sandals 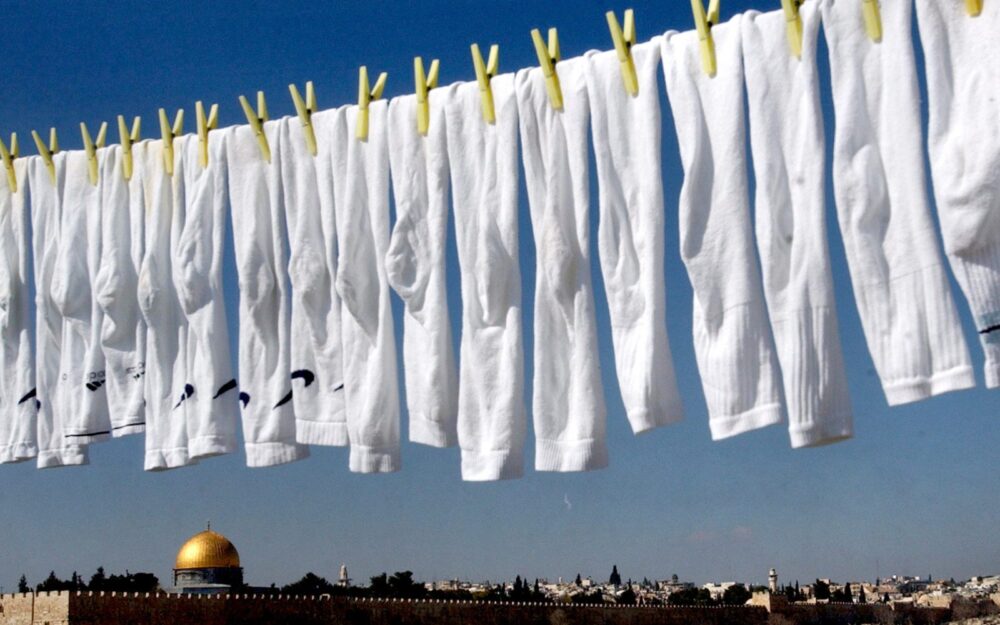 Socks left out to dry near an apartment overlooking the Dome of the Rock in Jerusalem’s Old City. Photo by Flash90

All those suffering from cracked heels, dry skin and sun spots can finally rejoice, for it’s time to put your sandals in the very back of your closet and reintroduce your feet to that most cozy of feelings – socks.

Most of us here in Israel last wore socks sometime around mid-March, so the excitement is not to be underestimated. In a similarly joyous manner, it’s time to pull out those pullovers, cardigans and long-sleeved tees. Fall, we love you. 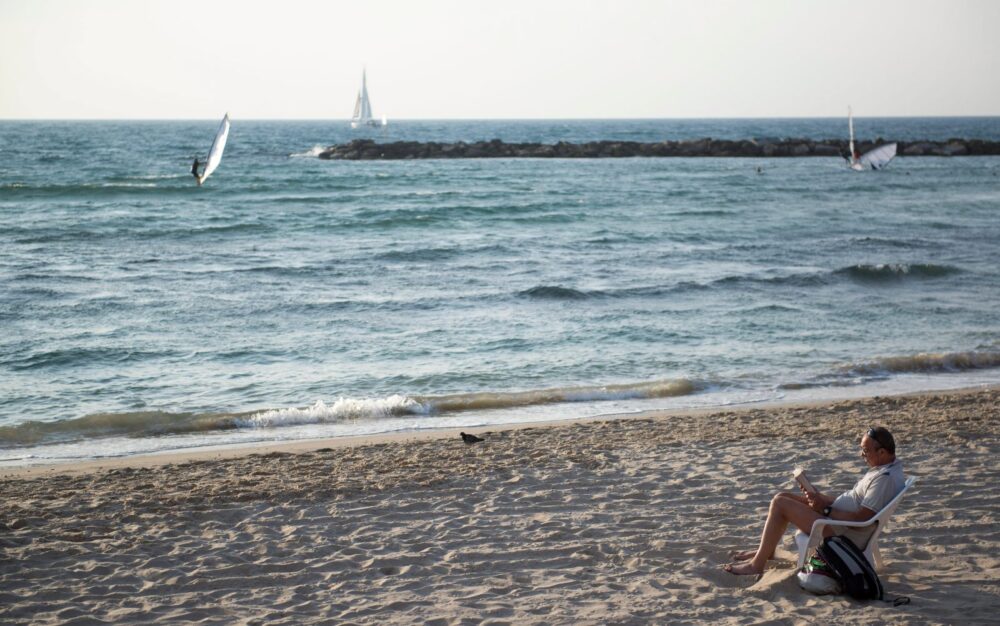 A man relaxes on the beach in Tel Aviv. Photo by Danielle Shitrit/Flash90​

Traditionally, the beginning of fall and the High Holidays is the ultimate relaxation period in Israel – summer is over, school has started and the festival vacation seems endless. This is so much the case that the phrase “after the holidays” is widely used to describe the general mood of procrastination, particularly when it comes to politics and diets.

This year the coronavirus crisis, which pretty much ruined our High Holidays last year, is still around, but hopefully – thanks to a very assertive vaccination campaign – we’ll be able to maintain some degree of relaxation and look forward to a good, cool and healthy new year.