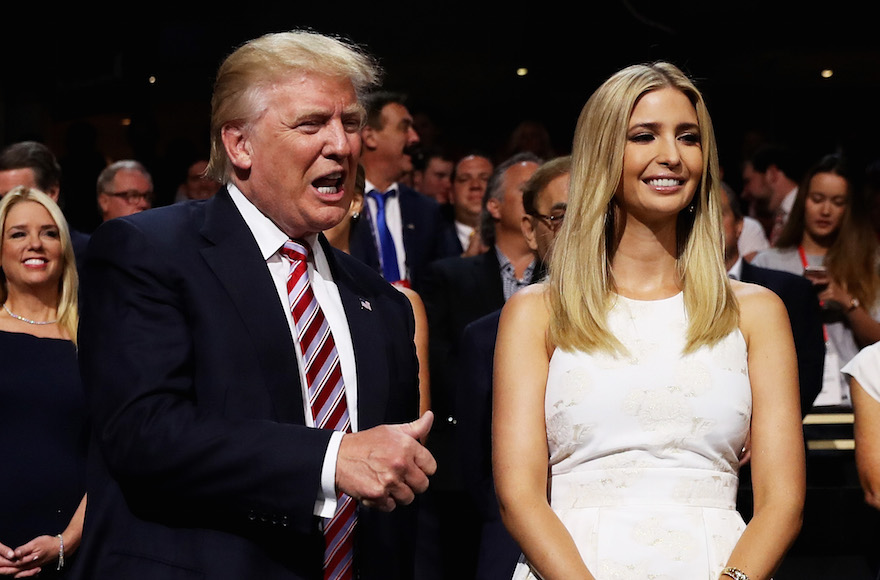 Donald Trump and his daughter Ivanka Trump at the third day of the Republican National Convention in Cleveland, July 20, 2016. (Joe Raedle/Getty Images)

CLEVELAND (JTA) — We’ve caught glimpses of him this week. He gave a three-line speech Monday night. The next day, he addressed the crowd via video feed.

But Thursday night is the real thing: Donald Trump, the official nominee of the Republican Party, will address 50,000 of his faithful from the convention stage in Cleveland.

Cable networks have been touting this convention almost as if it were the final episode of a reality show, which in some sense it is. Trump will likely speak from prepared remarks on a teleprompter, but if there’s one constant in his topsy-turvy campaign, we should be prepared for him to go off script and surprise the crowd.

With that caveat, here’s what to expect from one of American history’s most unexpected candidates — and the Jewish daughter, Ivanka, who will introduce him:

1. He’ll bash the Iran deal: This convention has been full of discord, but one constant thread is a vomit-like distaste for the agreement curbing Iran’s nuclear program, which Israeli Prime Minister Benjamin Netanyahu vociferously opposed. Throughout the campaign, Trump has described the deal as a disastrous capitulation, born of a failed negotiating strategy, that has emboldened one of America’s enemies.

2. He’ll gripe about America’s allies — except Israel: Trump has long said — even 30 years ago — that America’s allies play it for a fool. He has called on military partners to shoulder more of the financial burden of defense, and on Wednesday even suggested he wouldn’t necessarily honor America’s obligation to defend NATO allies if they are attacked.

But if he says anything at all about Israel, which benefits from $3 billion of U.S. aid, expect it to be flattering. Trump is a fan of Netanyahu. He admires Israel’s West Bank security barrier. And at least ever since his well-received speech to AIPAC in March, pro-Israel policy is one Republican orthodoxy he has not upended.

3. He’ll use the phrase “America First”: Jewish leaders have scolded Trump for his foreign policy campaign slogan, which was also the name of an American isolationist, frequently anti-Semitic group leading up to World War II. Given Trump’s support from an array of white supremacists, “America First” has poor connotations. But Trump has doubled down on the slogan, and even appended it as a hashtag to the revised version of a tweet many called anti-Semitic. The slogan was part of Wednesday night’s convention theme, “Make America First Again.” Don’t expect him to back down now.

4. He’ll praise his Jewish family: When critics accuse Trump of dog-whistling to anti-Semites, the most common defense is his obvious bond with his observant Jewish daughter Ivanka, her husband, Jared Kushner, and their children. “The fact is that my father-in-law is an incredibly loving and tolerant person who has embraced my family and our Judaism since I began dating my wife,” Kushner wrote in support of Trump earlier this month. Ivanka is a senior executive in the Trump Organization, and Kushner has been called Trump’s informal campaign manager.

His children have earned generally high marks so far in painting a human portrait of their father. Tiffany recalled how her dad would write thoughtful notes on her report cards. Donald Jr. described how his father had his kids learn from blue-collar workers. Eric described his father’s feeling of obligation to the country. Expect Trump to reciprocate the flattery.

5. His Jewish family will praise him: Perhaps the most charming and articulate spokeswoman for the Donald has been Ivanka. An icon in her own right, Ivanka Trump has provided a friendly face for the campaign, adding a softer touch to her father’s more extreme rhetoric and defending him from accusations of misogyny and bigotry. She’s also been tough, reportedly helping engineer the ouster of Trump’s former campaign manager, Corey Lewandowski. Ivanka has been so valuable to the campaign that her brother Eric said she’d make a good running mate.

When she introduces her father tonight, Ivanka Trump will try to warm up the crowd. After Ted Cruz spent 20 minutes throwing shade at Trump on Wednesday night, the candidate needs someone to go positive for the campaign. Expect Ivanka to do her utmost.