(JTA) — Primary day is here for Massachusetts, and most eyes have been focused on the race for a Democratic nod between the longtime progressive Sen. Ed Markey and the younger, more moderate Joe Kennedy III.

But there are multiple consequential clashes with Jewish significance going on Tuesday as well — including in the race to succeed Kennedy as a member of the House, where four of the many candidates are Jewish.

In this district, which covers a large chunk of western Massachusetts, Jewish challenger Alex Morse is taking on Richard Neal, the chairman of the House’s Ways and Means Committee, in another highly watched Democratic primary.

Morse is the 31-year-old progressive mayor of Holyoke — who was first elected to lead the small city at 22. His platform includes Medicare for All, defunding the Immigration and Customs and Enforcement agency, legalizing marijuana and canceling student debt.

Neal is a seasoned 71-year-old who is much more moderate and also heads the House’s Subcommittee on Select Revenue Measures — meaning he has clout on economic policy.

Morse has said he is hoping to become the latest progressive newcomer to unseat a more traditional incumbent, in the tradition of Rep. Alexandria Ocasio-Cortez or, more recently, Jamaal Bowman in New York. He has the backing of Justice Democrats, a group that has supported those candidates and others to mount formidable challenges to some of Congress’ longest-serving members. That means the vote to some extent symbolizes the battle between the surging left and the establishment.

The campaign has been dogged by controversy, but the impact is not at all clear. In early August, the University of Massachusetts College Democrats accused Morse of having inappropriate relationships with college students. But the Intercept reported days later that members of the student group had concocted the accusations as a way to bolster Neal’s candidacy.

Polling on the race is scarce, but Neal appears to have the advantage. A recent Jewish Insider poll has Neal up 9 points, 49% to 40%.

Morse is also symbolic of a younger generation of American Jews who are unafraid to criticize Israel.

While many in the pro-Israel community have raised the alarm about “The Squad” — the group of progressive House representatives that includes Ilhan Omar and Rashida Tlaib, the only members of Congress who support boycotting Israel — Morse aligns himself with them.

“Those four members of Congress in particular represent very courageous and progressive voices in our party, so it would be an honor to get to Congress and work alongside them,” Morse said last year.

This district of southern Massachusetts covers over two dozen towns, including Wellesley, Newton, Milford and Brookline, a small city that is about a third Jewish. 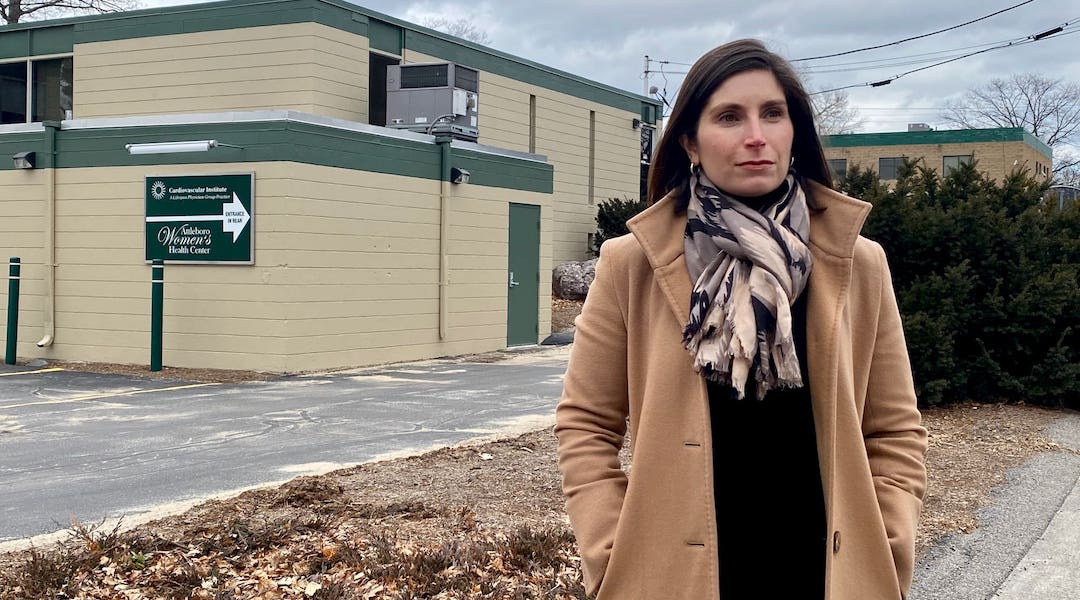 Jesse Mermell is one of several Jewish contenders in Massachusetts’ 4th District. (Jesse Mermell for Congress)

Auchincloss, a Newton city councilor, and Mermell, a former aide to Gov. Deval Patrick and a former member of Brookline’s municipal Select Board, have emerged as the frontrunners, a Jewish Insider poll found Sunday. Auchincloss earned 23% in that poll, and Mermell earned 22%. Grossman was in third with 15%.

Auchincloss, 32, is a scion of an influential family who graduated from Harvard and served in the Marines, and he has the endorsement of the Boston Globe. But ads against him show that he was formerly registered as a Republican and at one time worked for the state’s Republican party. He links to a full position paper on Israel and other Jewish issues on his website; in it he notes that he experienced anti-Semitism in the military. He’s pro-two-state-solution and believes in a compromise brokered only by Israelis and Palestinians, not outsiders.

Mermell, 40, has the backing of progressives such as Rep. Ayanna Pressley (a member of the Squad) and Ritchie Torres, a likely incoming congressman from New York. She sounds like a moderate Democrat on the page of her website devoted to Israel issues, outlining opposition to BDS and the idea of cutting aid to Israel (or the Palestinians), and firmly supporting a two-state solution. She also believes in renegotiating a new deal with Iran “to prevent Iran’s acquisition of nuclear weaponry for the sake of Israel, the Palestinians, and the world.”

Grossman, an at-large member of the Newton City Council and self-described progressive, has spoken with the American Jewish Committee, saying she rejects the movement to boycott Israel and firmly supports the Black Lives Matter movement.

Sigel, who has a Jewish father and Puerto Rican mother, helped start the Young Jewish Leaders Council, which brings together over 40 Jewish young adult organizations in the greater Boston area. From his website: “He also helped create the young leadership division of the American Jewish Committee – ACCESS – both in Boston and nationally, which launched national Jewish-Latino and Jewish-Muslim taskforces for young adults.”

A fourth candidate in the race, Ihssane Leckey, is an immigrant from Morocco who married into a Jewish family. She is highly critical of Israel and said she would advocate for conditioning aid to the country.

8th District: A Jewish doctor takes on a conservative Democrat

Another progressive vs. moderate showdown takes place in this small district in the eastern part of the state, where Stephen Lynch, one of the House’s more conservative Democrats, has held the office since 2001.

Lynch’s opponent is infectious disease specialist and political newcomer Robbie Goldstein, a progressive 36-year-old doctor who favors a Medicare for All healthcare agenda. Lynch votes with President Trump nearly 20% of the time, and Goldstein likes to point out that Lynch was one of the few Democrats to vote against President Obama’s Affordable Care Act.

Goldstein outlined his Israel support to JTA in June, saying he firmly rejects BDS and the idea of Israel annexing the West Bank. He has also told Jewish Insider that he does not agree with conditioning aid to Israel, a topic that has become a new benchmark of Israel support in the past couple of years.

“We also have to recognize that just because we have an unwavering commitment to Israel does not mean that we don’t have the freedom to criticize how the Israeli government may use our aid and may use our support,” he said. “We have a right and an obligation, I think, to speak up when we see an ally of ours use American resources in a way that goes against our own values as well as their own values.”

Despite his voting record, Lynch won in the solidly blue district with over 70% of the vote in 2018.