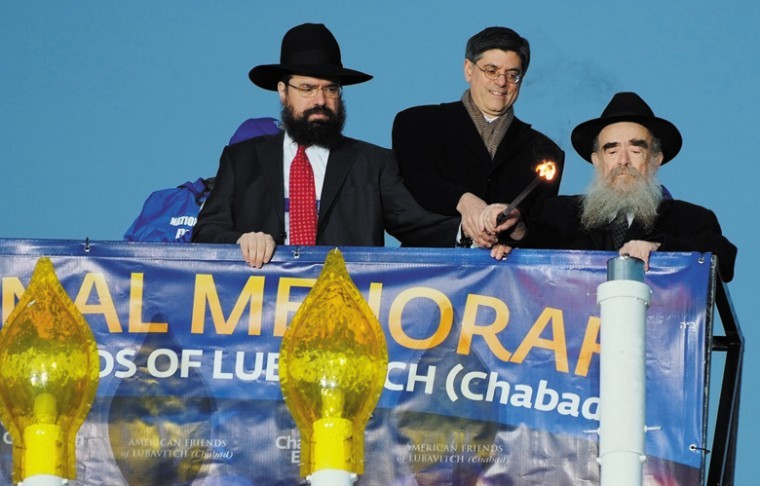 President Barack Obama on Monday announced that Jack Lew, his director of the Office of Budget and Management-a Cabinet-level position-would replace William Daley as White House chief of staff.

Lew, 56, was chosen for his long years in government and his reputation as a skilled multi-tasker-he was top- budget cruncher for Bill Clinton before reprising the job for Obama-but Jewish officials were offering a sigh of relief for a subsidiary reason: Their who-we-gonna-call pleas were answered.

Since Dennis Ross, Obama’s top Iran adviser, announced his departure late last year, community officials wondered who was left to call in a White House that has hemorrhaged top Jews over the last year or so. Lew, an Orthodox Jew, is close to the community and is a go-to person for Jewish events in the capital.

“The reports that there’s no one to talk to have always been exaggerated,” said Malcolm Hoenlein, the executive vice president of the Conference of Presidents of Major American Jewish Organizations.

Hoenlein pointed to Peter Rouse, a counselor to Obama who has served as acting chief of staff, as someone who has always been accessible.

Still, Hoenlein added, “Jack being there will be beneficial, it will foster communication.”

Obama launched his administration with a strong contingent of Jewish advisers: In addition to Ross, David Axelrod was his top political adviser, Rahm Emanuel was his chief of staff and Daniel Shapiro handled the Levant desk at the National Security Council.

Emanuel quit in late 2010 to run for Chicago mayor, Axelrod left soon after to help run Obama’s re-election campaign and Shapiro is now in Tel Aviv as ambassador.

That left a perceived gap in the White House-one that Lew would fill, although Jewish officials stressed that they did not expect the attention from a chief of staff that they received from mid-level staffers.

“That’s not the role he’s going to play,” said Abraham Foxman, the national director of the Anti-Defamation League, referring to the regular conference calls that Ross and Shapiro had with Jewish community leaders. “He will be an adviser to the president on all things and a gatekeeper, but to the extent the president will turn to him for his view, he has an understanding of the community and of its views.”

The Obama administration clearly wanted to push across the Jewish message; Shapiro Tweeted the news in Hebrew to his followers. Israeli ambassadors don’t usually make a big deal of the appointment of a White House chief of staff.

“Jack’s economic advice has been invaluable and he has my complete trust, both because of his mastery of the numbers, but because of the values behind those numbers,” he said.

Lew has become something of a go-to Obama administration speaker and guest for the organized Jewish community, particularly among Orthodox Jews. Most recently, he lit the “national menorah,” the giant chanukiyah that graces the National Mall and is organized by American Friends of Lubavitch.

“As an American Jew, I can’t think of anyone who has a deeper commitment to the United States as well as his own Jewish identity at the same time,” said Rabbi Levi Shemtov, who heads the Chabad group and noted that Lew occasionally stops by for Shabbat services. “His appointment obviously gives the White House an envoy to the Jewish community who is eloquent, respected, even beloved across the Jewish spectrum. That’s probably an added bonus rather than the core qualification.”

Lew maintains a reliable shtick in his interaction with Jewish audiences: How he balances the 24/7 demands of being a top government official with the 24/6 Sabbath-observant lifestyle.

A favorite tale involves a Shabbat call he received from President Clinton, and how he would not pick up despite Clinton’s claim on the answering machine that it was urgent and “God will understand.” After that, a rabbi gave Lew dispensation to answer such calls under the principle of “pikuah nefesh,” saving a life.

Another favorite line during his 1990s stint, when he lived in Washington-his family is now based in New York-was an exchange with clergy at Beth Sholom, a synagogue in Potomac, Md. Nathan Diament, who directs the Orthodox Union’s Washington office, recalled that a rabbi would suggest jokingly that Lew might want to run for shul treasurer. Lew would rejoin that directing the OMB was complex enough, thank you very much.

It’s a shtick that suggests a corny, old-fashioned sense of humor, but friends say it’s also one that is emblematic of his humility and cordiality.

“Everyone would recognize that Jack’s management style and personality is noticeably different from that of the previous Jewish White House chief of staff,” Diament said, a reference to Emanuel’s abrasiveness.

An open question is how much harder it will be for Lew to balance family and Shabbat observance in his new role. He stays close to his daughter, Shoshana, who works at the Obama administration’s Council Environmental Quality, but his wife and son remain in Riverdale, N.Y., where they are active in the Hebrew Institute of Riverdale, in the Bronx borough of the city.

His previous stints-in addition to the OMB post, he was also a deputy secretary of state under Obama-involved managing a 9-5, Monday-to-Friday bureaucracy. Running the White House means dealing with crises that have a bad habit of happening on weekends.

“It’s a reflection of this administration’s comfort with him and his being Jewish,” Foxman said. “This is a job that is 24/7-but if there’s respect, it works.”