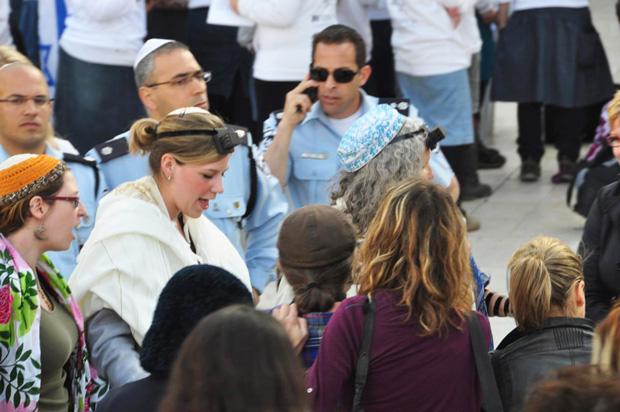 As police surround her, Andrea Wiese prays at the Western Wall with her tallis and tefillin. Inspired by her passion to encourage women worldwide, Women of the Wall pursues eqaulity for worship. (Photos courtesy: Wiese)

Women of the Wall works towards earning women the right to wear prayer clothing and pray out loud from the Torah at the Western Wall, or Kotel. Twenty-eight-year-old Andrea Wiese supported the organization by becoming the first woman ever to wear tefillin, or black boxes with parchment containing verses from Deuteronomy, at the Kotel.

Although Wiese was unaware that she was a pioneer, she knew that it was illegal for women to bring tefillin into the Western Wall premises. So Wiese purposely hid the tefillin inside her coat, since she knew that only her bag would be searched. She then waited to take it out until she got to the Wall.

“I wrapped [the tefillin] around my hand, but I didn’t put the one on my head yet,” Wiese said. “Then we got to the prayer Shema, I couldn’t keep going because it was…really hard for me to pray without it. I put it on my head, and even my friends were shocked. I just kept praying, but it was intense. The photographers were going crazy. I didn’t realize how big of a deal it was really going to be.”

When Wiese brought her campers from the National Federation of Temple Youth’s Israel trip to the Western Wall last year, the girls said they felt excluded because they were not Orthodox. This exclusion was upsetting to Wiese because she believes strongly that women should be able to pray there any way they choose, regardless of their denomination.

“The Western Wall symbolizes the center of Judaism for all Jews,” Wiese said. “Every Jew should be able to pray the way that they want to at the Wall, as long as it’s respectful. I think [the Kotel] shouldn’t be controlled by a small minority of people; it should be open to all types of Jews, whether Reform, Conservative, or Orthodox.”

Many Jewish teens share Wiese’s opinion on the hostility at the Kotel. Orangetown Jewish center in Orangeburg, N.Y. congregant Mia Brill attended one of Women of the Wall’s Rosh Hodesh services to support the cause.

“I think [the strict rules] portray to people that only one way of expressing your religion is Ok,” said Mia, a high school junior. “It basically says that if you don’t practice Orthodox customs to the standard of the Rabbinate, then you can’t pray how you are comfortable at the holiest place to our religion.”

Congregation Ohev Shalom in Wallingford, Penn. congregant Talia Kaplan wrote a piece about Women of the Wall’s mission that was published on its blog. She believes violence is unacceptable at such a holy place, and that Women of the Wall are being harassed and treated unfairly.

“While I have never prayed with Women of the Wall, I have visited the Kotel, so I incorporated my own opinions as I pulled aspects from each blog post and article to create my project,” said Talia, a high school senior. “The piece I ended up writing is ultimately fiction, but it is based off of many very real events and opinions. My piece pays tribute to the courageous men and women who are working so hard for equality.”

Wiese continues to pray with and support Women of the Wall each month at their Rosh Hodesh services. Many who know Wiese find her actions commendable.

“[Andrea’s] best quality is her devotion to what she does and what she believes in,” co-worker Tamara Elise said. “Andrea never gives up; she works hard and she is passionate about teaching and Judaism. I think her strong sense of responsibility to what she believes is right will keep her involved with Women of the Wall.”